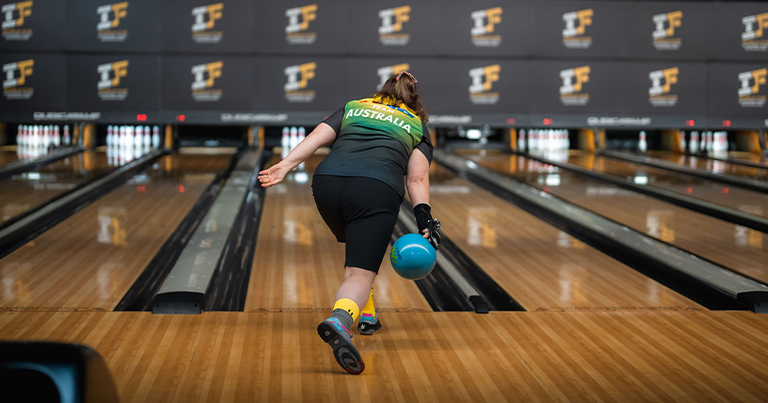 “I’m getting used to it,” Amanda said, laughing at how it feels when addressed as World Cup Champion.

At last month’s 2022 Para Bowling World Cup on the Sunshine Coast, Amanda claimed the gold medal in the women’s individual event. The achievement was obtained after 30 years on the lanes.

“It was an amazing experience to wear the green and gold, and I would do it again in a heartbeat,” explained Amanda.

Hailing from Victoria, Amanda has bowled at her local Shepparton bowl since she was 15. Her introduction to the sport came from her ‘rock’ in life, her husband, Jason.

“We met at a job interview and have been together for 30 years,” said Amanda.

“I went to watch him bowl one weekend and thought it looked like fun.

“He encouraged me to come and join. So after initially refusing, I had a game and joined the Saturday afternoon league with him and have been bowling there ever since,” added Amanda.

Nine years later, Amanda increased her involvement in the sport.

In 2004, Amanda made her first representative team for her hometown Shepparton team that would compete in the famous Country Cup. The proud Shepparton bowler would continue to feature in their team from 2004 to this year, only missing six events.

In 2015, Amanda realised there was a Disability group in Melbourne which she then joined and has not missed out on since. Representing her state Victoria at National Disability Championships, Amanda has been captain three times.

Amanda has an intellectual disability. She has trouble reading, writing, and understanding a few things but has never allowed that to stop her from achieving what she sets her sights on.

Off the lanes, Amanda loves to cook, work and spend time with her everything – her family. Working in aged care, Amanda loves the enjoyment it gives her.

“They all know I play sports and bowl. They love to hear the stories of what we do and get enjoyment from that,” explained Amanda. “So when I told them I was going to Queensland to represent Australia, that was exciting for them, and then to come back and show them the medal was special”.

2022 has been a standout year for the Victorian on the lanes.

The journey to world cup champion began in September when she and her husband Jason were encouraged to attend the inaugural National Inclusion Masters in Orange, New South Wales.

A longer event format than what Amanda was accustomed to, the event proved to be a good starting point for bigger things as she claimed the women’s division title.

“I was glad to have a chance to participate in a wonderful tournament, and hopefully, we can have it again for years to come,” said Amanda. “18 games are probably enough, but you have to get used to bowling 18 games or more if you want the chance to bowl in the higher-level events”.

Following the National Inclusion Masters, Amanda was invited to the sport’s first-ever Inclusion National Training Squad (NTS Inclusion). From there, she was one of the few first-ever bowlers selected to represent her country at a Para World Cup event.

Her husband Jason was selected as a reserve for the team and ended up bowling some events. Having Jason by her side during the whole event helped Amanda claim the gold.

“It was so important because all the other team members had their parents with them, and I didn’t, so Jase was with me the whole time, and it was terrific,” said Amanda.

Amanda loves tenpin bowling. You have to if you have done it for 30 years, but her experience at the World Cup helped solidify the why.

“I love meeting new people and having a disability myself, I enjoy watching others with a disability to see how they compete, and the World Cup was a real eye-opener for me,” explained Amanda.

“I watched a guy from Hong Kong who was legally blind. All he had was 2% vision, and I’m unsure how he did it, but he’s up there bowling a strike.

“Or the bowlers in a wheelchair and how they can bowl a ball and do the amazing stuff they do, I get enjoyment watching these amazing bowlers,” added Amanda.

With the standout achievements always comes a group of people that have supported Amanda on her way to success.

Prior to this year, ‘not following through properly in her swing and putting too much pressure on herself’ were things that she needed to address and improve—some of those improvements helped by World Cup teammate, Kallan Strong.

“We have known each other for probably six years, competing at Disability tournaments together, but in the last two years, we have become close friends and he was a big help at the World Cup,” explained Amanda.

“He just told me to stop worrying about a bad game, to shake it off and move to the next one, which helped a lot.

“Finally, a thank you to my Disability group in Melbourne and my husband, Jase. He is my support, my rock, my everything,’” added Amanda.

With excitement from such a jam-packed year, attention turns to 2023, and Amanda is excited about the prospects on the horizon while keeping grounded in her goal-setting.

“My goal is to represent Australia in Singapore and improve my league average,” said Amanda. “I am currently at 186 and want to hit 190,”.

The determined bowler has received recognition in her hometown with feature pieces in her local paper—the story creating an opportunity for off the lanes.

“I have been offered a sponsorship and to be an ambassador for Tenpin Bowling at a local business here in Shepparton,” explained Amanda. “It’s for the Rights Information and Advocacy Centre, which helps elderly people with a disability,”.

Tenpin Bowling Australia congratulates Amanda on all her success in 2022 and looks forward to what’s to come in 2023.