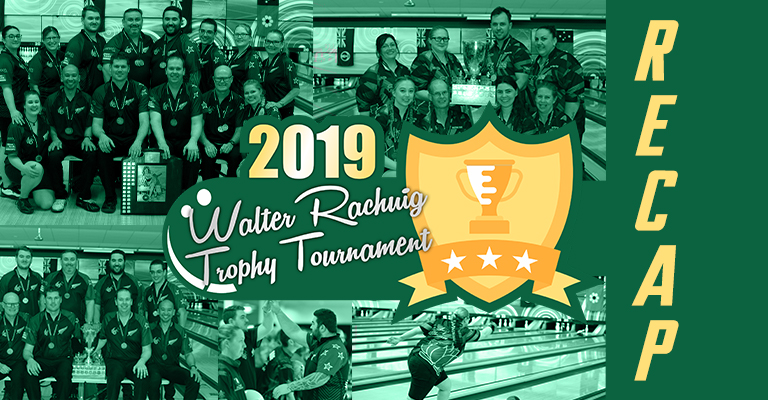 The 58th running of the Walter Rachuig Trophy would kick off on Tuesday with New Zealand being crowned the overall champions at the conclusion of the three-day event.

Established in 1963, teams would oppose against each other for two complete rounds of matches over a three-day period. Each team member would be matched against the opposing team member in the corresponding position in the line-up and the bowler achieving the highest total scratch pinfall for the game will be awarded one point for the team. In the event of an equal game, points would be shared.

The 2019 Rachuig would see a total of 10 team’s battle it out with every Australian state represented, New Zealand and an Australian Defence Force invitational team all vying for this year’s title.

The team pinfall will be compared with the total pinfall of the opposing team and 2 points will be awarded to the team with the highest total pinfall. At the end of the three days, the tournament awards the champions in both male and female divisions. The overall champion (male and female points combined) would be awarded the coveted Walter Rachuig trophy and Trish Datsan Memorial Trophy.

On the agenda, six games per day, with a total of 18 games for the bowlers.

The 2018 male division champions Western Australia would again prove to be a threat early on by finishing on top of the male division ladder at the conclusion of day one with 31 points. In the first game of the day, WA representative Ken Temme would bowl the second highest score of the tournament to that point of 290.

A challenger would emerge to the team from the west in New Zealand. NZ bowler James Kelly would set the standard by going 100% (6 wins/0 losses) on the first day of play.

The team from NZ showed they were up for the fight providing a close tussle to WA to end day one in the sixth and final matchup for the day. WA would win the head to head battle 4-1 but NZ would nab the 2 bonus points for the advantage in the pinfall comparison, a difference of 41 pins providing a 4-3 score result in the first of the encounter of the two challengers.

For the ladies, the teams from the A.C.T and N.S.W went toe to toe throughout the day and both ended up on 27 points on top of the female division ladder. The team from the A.C.T would appear as team number one on the ladder due to the pinfall advantage. The two teams would not play each other on the first day but would meet on day two.

The A.C.T were led early by an impressive Rachuig debut for 18 year old Amy Shoesmith who won 100% of her games on day one and averaged 212.3.

Matching their men team members, the ladies from New Zealand would finish in third position with 24 points. The two impressive performances contributed to New Zealand being on top of the overall standings for day one with 52 points.

New Zealand’s James Kelly run of wins would finally end on the 11th game of day two. The New Zealander would win ten games straight for his team helping his men team make a mark on day two. The team would win 28.5 points for the day, losing only one matchup against Tasmania in game 11, which coincidentally ended up being the game where the win streak for Kelly ended. The impressive day placed New Zealand on top of the male division for the conclusion of day two.

The West Australians would sit close behind the Kiwis largely due to the performance of World Senior Australian team member Michael Muir. Bowling his 25th Rachuig event, Muir would win five of his six games for the day and shoot up the top of the individual standings.

Queenslander Grant Hold would go close to the first perfect game of this year’s Rachuig bowling a 299 in game 11.

In the ladies division the battle for the female division between the A.C.T and N.S.W lived on. Finally getting a chance to verse each other for the first time in the second game of the day. The A.C.T would win the head to head match ups 3-2 and also claim the bonus two for pinfall advantage.

Instead of sulking about the result, it provided the opposite effect. The blues were spurred on and provided a run of 4 victories to end the day. Led by Sarah Heath, Alexia Hicks and Amy Brown, the blues would finish on top of the female division at the end of day two.

The team from A.C.T may have fallen off the top of the female division but they would now move up to overall leaders on day two.  Great performances from Lauren Tait who won 5 of her six head to head matches and Robert Townsend winning 4 out of 5.

The final day was here and the key battles that evolved over the first three days would remain.

The men’s division battle between New Zealand and Western Australia would commence after meeting in the revenge game on the third matchup for the day. The match up would be a white wash. The team from New Zealand would win all five head to head games and the bonus 2 points for pinfall advantage for a maximum gain of 7 points. Two of the match ups were decided by 3 pins each so Western Australia were not losing hope.

Games 17 and 18 would put the nail in the coffin for any potential back to back championships for the guys from WA. They lost 1-6 to ADF and 1-6 to the NT. New Zealand would close their campaign with a 5 to 2 victory over the Queenslanders to claim the 2019 male division. NZ bowler Blake Brooks would lead the men on the individual standings averaging 210.6 and bowling all 18 games with a high game of 251. NZ would have two of the five all-stars with team mate James Kelly joining Brooks in the celebrated five.

Western Australia would settle with a silver medal after being bravely led by veteran campaigner Mike Muir. Muir would finish second on the individual standings averaging 210.4 over 17, missing the last game. The A.C.T men would finish with the bronze medal contributing greatly to the overall standings.

Game 17 of 18. It was the game that could help decide the fate of the female division. The A.C.T were sitting three points behind N.S.W and needed a repeat of their first encounter to potentially flip the results. A repeat is exactly what they got.  The team from the A.C.T again would win 5 points to 2 against the blues. The result would deadlock the two teams on 71 points with one game to go.

The A.C.T would match up against South Australia and win 6 points to 1. As it did throughout the event, NSW would duplicate. NSW would beat the Australian Defence Force team, 6 points to 1. 18 games over three days and the two teams were deadlocked on 77 points. NSW with a 266 pinfall advantage would be handed the crown.

The blues were led by Alexia Hicks who finished second on the individual standings averaging 203.6 over 18 and winning 61.1% of her matchups and was helped by Amy Brown who won 70.6% of her 17 matches.

The A.C.T girls would finish with a silver medal and it was the 18 year old Amy Shoesmith that steered the team throughout the three days.

Winning 82.4% of her 17 matches, averaging 197.2 and a high game of 233, Shoesmith would finish 4th on the individual standings. The performance would cement yet another all-star jersey for the bowler.  Shoesmith has been named All Star in Junior, Youth and now Adult nationals for 2019 which wraps up an exciting year for the bowler after representing Australia on two separate campaigns.

The Northern Territory would claim the bronze medals after being led by superstar Rebecca Voukolos. Voukolos reminded all of her class by finishing on top of the individual standings after averaging 207.3 over 18 with a high game of 267.

The overall standings would be as close as the female division. Both the teams from NZ and the A.C.T would finish on 147.5 points. Unfortunately for the A.C.T, as they did with the female division, they would again have to be content with the silver after trailing NZ by 251 pins on total pinfall. Largely due to the female teams performance, NSW would claim bronze while NZ would be crowned the 2019 Walter Rachuig Trophy Tournament Overall Champions.