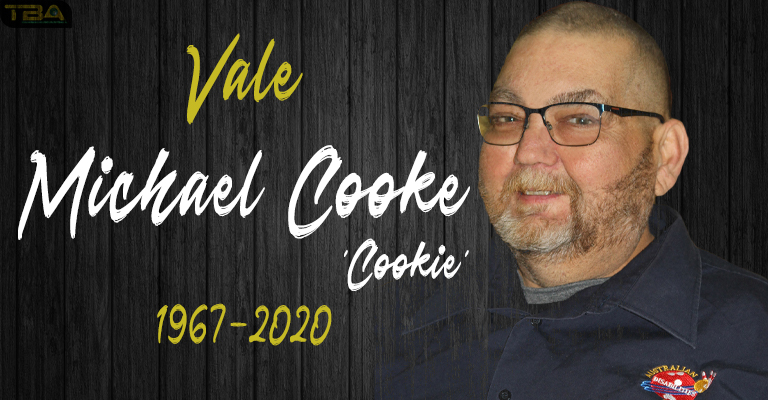 Tenpin Bowling Australia (TBA) has paid tribute to Michael Cooke, Tournament Director of the National Disability Championships and President of Australian Disability Tenpin who passed away recently at the age of 53.

“Michael faced significant adversity in his own life, but he was determined to make a difference by helping others.  The sport of tenpin bowling in Australia is indeed indebted to Michael Cooke.  He was not only a colleague that I respected and enjoyed working with but a dear friend that will be sadly missed” explained TBA CEO Cara Honeychurch.

“It’s the Ability within the (dis)ability” – this was the mantra of Michael Cooke. Nicknamed ‘Cookie’, Michael was loved and supported by so many. The love and support received would ultimately mirror what Michael provided so many.

His commitment to the National Disability Championships was long and profound. He  played an integral part in connecting two groups – The Australian Disability Tenpin (ADT) and Tenpin Bowling Australia (TBA). An achievement that was not always an easy feat. Our sport has a long history whereby every time there is a disagreement amongst leaders, instead of working through the issues, invariably another association is set up and we have multiple groups running events and appealing to the same participants.

Michael would always see past the small stuff and think of the bigger picture. An ongoing determination to provide the best stage possible for those living with a disability in the sport he loved and cherished the most – Tenpin Bowling.

Michael began his love for the sport at five years old at the Olympic Bowl in Civic, Canberra. Michael and his sister Maureen were introduced to the sport by Order of Australia Medallist – Pat Somerville. At nine years old, Michael’s life would change forever after a devastating accident.

Michael was hit by a car as he crossed the road resulting in paralysis from the L2 vertebrae down.  The diagnosis ensured Michael would live the rest of his life in a wheelchair. A change faced with bravery and acceptance, according to Michaels mum, Lilian Cooke.

“He never said ‘why me’ he just accepted that this had happened, and he got on with learning to live with it.  We never treated him any differently”.

Michael’s feature image on Facebook represented him to a tee. The photo shows Michael sitting in his wheelchair, hurling a bowling ball down the lane. A delivery at his beloved National Disability Championship while wearing a jersey with the writing “It’s the Ability within the (dis)ability”. All while having his adored ukulele on the back of his chair.

Michael Cooke was the Tournament Director of the National Disability Championships. His journey to such a prestigious title was a long one that involved playing a crucial part in ensuring the championships are what they are today.

The history of Disability Championships has involved many different phases. It all began with a group of bowlers, carers and parents from the east side of Australia running the first five championships that began in 1989. The Australian Tenpin Bowling Congress (ATBC) became involved in running the 6th in 1994 and continued to do so till 1998. Due to a significant restructuring of the NSO and a lack of support for disability activities, the National Disabilities Committee formed. Later, they would change their name to Australian Disability Tenpin Inc (ADT).

The ADT group contained disability supporters who aimed to ensure that the Disability Championships continued. Michael’s first involvement with the ADT began in 1996 when a small group of bowlers from Belconnen travelled to Adelaide to participate in the championships. He would then join the committee locally to help run the nationals in Canberra the following year before nominating and being elected to the National Committee in 1998. Upon the passing of Barry Cole, Michael was voted President.

“Michael always believed that everyone had the right to be part of tournaments that didn’t categorise,” said his mum Lilian. “He felt that everyone deserved the same ranking as they had in league. He was adamant that everyone is treated equally and with respect, regardless of their disability. No one person was better than the other”.

Don Atkinson is one who witnessed all this change. Another long servant of the sport, Don has provided decades of work with the ADT and first became involved in the Disability Championships in the first year ATBC became involved. Through all the work, Don formed a strong friendship and respect for Michael.

“In his role as President and Tournament Director for the National Championships, he has always given his all and he will be sadly missed”.

In 2008, the NSO restarted their involvement with Disability activities by setting up their own National Championship separate to the already running one by the ADT.

“It was after the time that Cara Honeychurch joined TBA that Cara and I had some discussions on how we could combine the two Disability events, things started to move, and Michael was our (ADT’s) voice on these arrangements” explained Don.

“Fairly early on in my tenure as CEO (2012), I first reached out to Michael, the President of ADT to understand why two organisations were both running a National Championship for People With a Disability in different parts of the country a week apart” explained Cara. “Whilst there were valid reasons for why we’d gotten to that point; equally Michael and I both shared the vision that this needed to change, and it was time to put the past behind us and run a combined event”.

The new combination of events saw many challenges at first with a joint management committee formed. Throughout, Michael would continue to be the one to remind people of the bigger picture – it’s for the bowlers, and this is best for them.

“We simply would not have achieved this outcome without Michael’s vision and drive to make this succeed.  I admire Michael for so many reasons, but above all he was always driven to do what was in the best interests of the bowlers” said Cara. “Michael was the voice of reason when others got emotional  and he was able to bring people back to what mattered most, serving the community”.

The question of ‘why are we not doing stuff together’ served as the basis of sharing a new vision, and Michael was always the one pushing the change for the better.

“After that first combined event and witnessing the joy of old friends seeing one another after so many years apart we have never  looked back! It brought everyone back together – and reminded us of what truly mattered ” explained Cara.

Michael’s appetite to be involved and play such a large part in these events stemmed from not only a desire to do but the joy he received in witnessing it all happen.

“It was because of his passion for the game. He wanted everyone to have the same opportunities, and he enjoyed cheering on everyone from the lowest grade beginners to the more experienced” said mum Lilian Cooke. “It gave him great pleasure to see the lower grade bowlers proudly walk up to receive their medals”.

It was about the bowlers. Michael’s main focus was always about and always was for, the bowlers.

“Michael has always been a very forthright person and very vocal in his support of the game of Tenpins for people with a disability.   He has served as a representative of Bowlers in the ACT for many years” described Don Atkinson.

His other love in life was the ukulele. Wherever Michael went, you would always find his treasured four-string friend not far away. Many times, it would sit on the back of his wheelchair as his facebook feature image hinted. It brought so much joy to Michael, but as with other things in life, the pleasure it provided others was what it was all about for Michael.

Michael would become a regular and well-known busker around the Tuggeranong area, spreading joy to as many people as he could. He would take the hobby a step further by joining the Tuggeranong Ukulele Group (TUGs). The TUGs would perform at group events throughout the Canberra region.

“I know that he has formed a ukulele band in heaven” said his mother, Lilian.

The play of the ukulele represented his love for music. He would even name his medical journey after an album from one of his favourite bands – the Beatles.

“The Magical Medical Mystery Tour” – was the name personally dubbed by Michael in his public sharing of his medical journey to all on Facebook. A slight alteration to the 1967 Beatles album – The Magical Mystery Tour. The ‘tour’ officially kicking off four years ago when Michael was diagnosed with Bowel Cancer.

Things worsened in 2020 when Michael suffered three heart attacks which resulted in stents and fitting of a permanent pacemaker.

“Things never improved from then” explained Lilian but Michael never lost his sense of humour.

“The last week he struggled to communicate – at one stage where we were talking to the nurses, I commented that he probably was thinking ‘oh just shut up mum!’ which Michael nodded his head in agreement” explained Lilian.

The Magical Medical Mystery Tour ended on the 4th October. A tour that was met with determination and transparency to all those that cared. Only a tough Cookie in Michael could face the number of challenges he did whilst keeping positivity throughout. The end of the ‘tour ‘providing a silver lining to those that witnessed the pain it offered.

“Our lives will be very different without him, but we know that he is free of pain and that helps us get through the day” shared mum Lilian.

Cookie always did everything with a positive attitude. Any chat you had with Michael about how he was, would quickly be diverted to him asking how you were. He cared for others deeply and always preferred providing joy to others. The pleasure provided to others possibly helped fuel his energy for the battles he faced.

A man who inspired many in the sport he cherished the most – Tenpin Bowling. Through his efforts within the sport he encouraged others to embrace life no matter their situation.  As his bowling jersey said, his beliefs for others were never to be defined by his disability, instead to shift and always focus on the abilities he and others had which were plentiful.

Tenpin Bowling Australia sends their condolences to Frank and Lilian Cooke and the rest of his loving family. Gone but never forgotten.