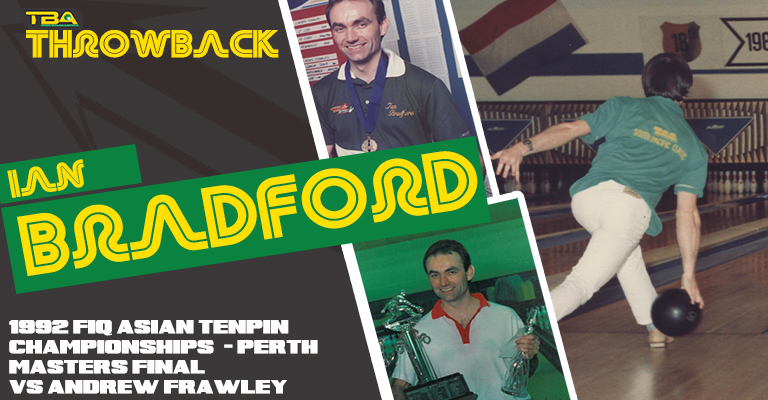 The year was 1992 and the 12th Asian Tenpin Championship was held on home soil at Craigie Bowl in Perth. The Aussie team of 12 (six for each gender) was full of the country’s finest bowlers.

The team would finish with an astonishing 12 medals throughout the tournament which included five gold.

Ian Bradford would have an amazing event for his country. The Victorian would go on to win gold in doubles, silver in trios, gold in teams, and gold in the coveted master’s event.

This video looks back at that master’s event.

An all Australian match up for the gold medal would take place. Frawley would force a repecharge but Bradford would eventually be crowned masters champion.

Elected to the Hall of Fame in 2004, Ian Bradford was one of Australia’s greatest tournament bowlers of the 90’s.  Born in 1960, Ian had a bowling career spanning some 27 years.

He represented Australia on several occasions, including the AMF World Cup in 1988, coming 2nd.

Ian was a multiple representative in the Victorian Rachuig Teams and bowled his first perfect game in 1985 in Singapore, following this with another 12 perfect games recorded to date.

We thank Patrick Birtig for allowing us to use this video that is on his bworld2 youtube channel – . In this instance we would also like to thank Chris Batson for providing the original footage to Bworld2 and allowing us to repurpose on our site.