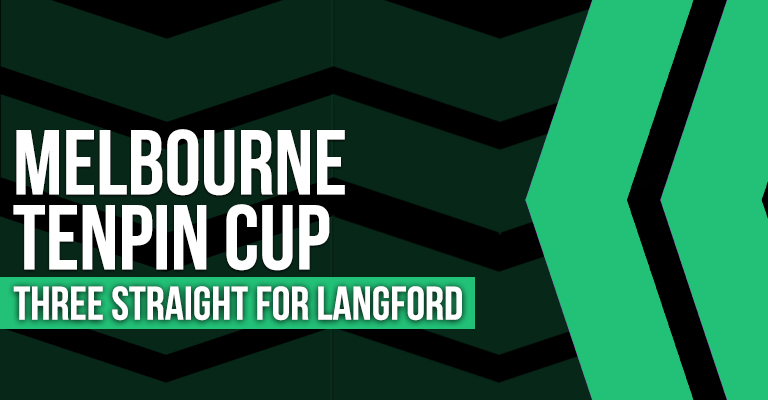 Jarrod Langford has won his third straight Melbourne Tenpin Cup over the Queen’s Birthday long weekend in Victoria to shoot up the top of the Open Division rankings for 2022.

After two years of cancellations due to COVID-19, a total of 110 bowlers lined up for the 48th running of the prestigious event at Oz Tenpin Chirnside Park to compete in the third Open division ranked event for the year.

After winning in 2018 and 2019, the ‘King in the North’ Jarrod Langford would once again reign supreme, claiming his third straight title after two days of play.

“The third Melbourne Cup in a row is really special,” said Langford following the win.

“After not competing in the event over 2020 and 2021 because of COVID, to get back down there and compete is really special and winning it again means a lot to me.

“Winning the Melbourne Cup is never an easy feat, especially with the calibre of bowlers that compete in it, so making it one more feels good,” added Langford.

Tasked with ten qualifying games to make the top 39 that would progress to stage two, National Training Squad members Bec Whiting, and Sam Cooley set the tone early as qualifying got underway, averaging an impressive 231 from their appearances.

As Squad B started on Saturday afternoon, NTS 21 athlete Bernie Grueso Jnr would continue his great year bowling the event’s first perfect game of 300 in his second qualifying game. Also sitting in squad B, Jarrod Langford would impressively commence the defence of his crown.

Averaging an incredible 243.3 over his ten games, the Queenslander would do enough to solidify his position as the top qualifier. The ten qualifying games included a highlight in the sixth throwing the events second 300 game, a mind-boggling career number 44 perfect game.

“The 300 in the 6th game, was me trying to give myself a slightly different look,” said Langford. “I had thrown one ball up until that game, and just changing the ball and getting straighter on the lane helped me keep the pocket, and always leave makeable spares,”.

In a high-scoring stage one, the top 39 athletes progressed to stage two, averaging over 203.9. A further five games in the stage saw bowlers battling out to make the top 15 that would move to the stage three’s round-robin match play round.

Turning up his play, Langford would come out firing, averaging 251.6 over his five games to maintain the top spot heading into stage three. Things would remain the same up the top, with Whiting sitting in second place 106 pins behind Langford and Sam Cooley 222 pins behind the leader.

As the top 15 progressed through to the concluding round-robin match play stage three, bonus pins of 40 for a win and 20 for second were on offer, ensuring things were far from over for challengers to the title.

Recently selected for Australia for the World Games in Birmingham on the 7-17 July, Sam Cooley turned it on in the match play round. Collecting five wins and two second places on top of high scores of 289 and 288 would see the Shellharbour bowler finish with an event high of 240 bonus points. The turn of events was not a surprise to Langford.

“Sam is a world-class talent, and I knew going into the match play that I needed to stay on my game to have a chance, especially if Sam found a look, and he did just that, so I watched him pile up scores with 40 bonus pins, and I knew my lead would go away very quickly,” said Langford.

In comparison to qualifying and stage two, Langford found it difficult in stage three to win his rounds, only claiming three wins and two second places for a total of 160 bonus points.

“Sam had gone around me, something which frustrated me, because I hadn’t been as good during match play as I had in the qualifying and stage 2,” explained Langford. “I just knew I needed to try to get myself back to where I was and bowling a 259 in the last game gave me a chance, and fortunately for me, it was enough.”

A 259 last game and 40 bonus points would be enough to edge Cooley by 13 pins to claim his third straight title in the event.

“The key to victory was just trying to keep everything in front of me,” said Langford. “String the strikes when I was striking and make my spares, the friction that the lanes provided meant I could stay straighter for longer, without having to open up.”

With Cooley taking second place, Victorian Bec Whiting would hold onto third place in yet another remarkable performance. Following the weekend’s victory a 4th at the Kegel QLD Open and a 7th at the Australian Open, Langford now moves to the top of the rankings for the Open division on 198 points.

Studying an education degree, the Burdekin-based bowler has plenty on the agenda for the remainder of 2022, intending to compete in the upcoming Lexus of Townsville, Mackay Open and NSW Open before flagging another trip to the USA in early 2023.

The next Open Division ranked event is the Australian Masters, which will take place at this year’s Australian National Championship at Zone Bowling Moonah, Tasmania, on the 5-6 August 2022.