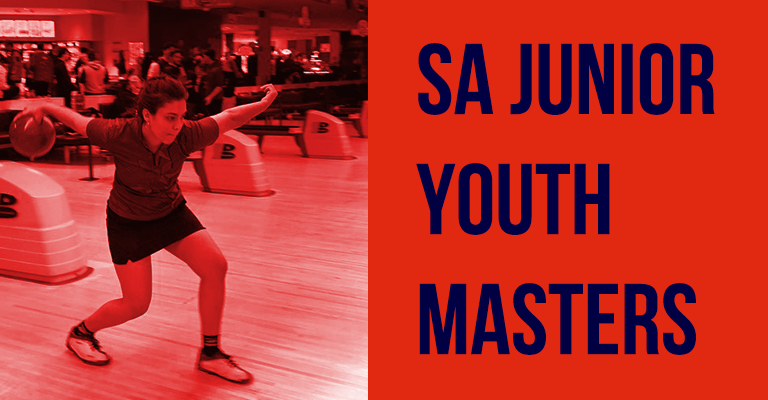 Three bowlers were crowned champions at the 2019 SA Junior Youth Masters at Zone Bowling Cross Road on the weekend.

North Queenslander Ivy Dickinson claimed the Youth female title and Grace Fahy was anointed the junior female master. After winning the male stepladder, junior aged Bernie Grueso Jr was awarded both the junior and youth master titles for the males.

For the first ever time, all bowlers would bowl together in the one event. Junior and Youth divisions would co-exist with the junior champions decided by finishing positions in the event.

The qualifying stage kicked off on Saturday morning with bowlers completing 10 games.

Eventual winner, Ivy Dickinson was the top qualifier after averaging 211.4 over 10 games with a high game of 244 in her last game, a total of 2,114. Youth rankings leader Chloe Jones sat 122 pins in second place, whilst South Australian up and coming junior- Emily Hart finished third and the highest of the junior females averaging 192.7 at the conclusion of stage one.

Hart was one of three juniors that would make the top 8 cut for stage 2 alongside Grace Fahy (5th) and Lilly Wilson (8th) who squeezed in after winning a one game roll-off from fellow junior Sophie Martin who tied in their qualifying scores.

Stage 2 began on Sunday with the top 8 qualifiers bowling a further eight games. Dickinson and Jones continued to go toe to toe, finishing top 2 and booking their stepladder final tickets. The big climber of the day was Grace Fahy who went from 5th to grabbing the last spot in the step ladder final (third).

In fourth place was Rebekah Commane. The Victorian has returned home after an outstanding year at the Savannah College of Art and Design in Georgia, USA. Commane started strong in the first half of stage two by bowling 200 plus in the first four games before bowling sub 200 for the final four games. Commane finished 54 pins behind Fahy at the conclusion of stage two, paving the way for Fahy to enter the stepladder.

With Jones and Dickinson being youth aged bowlers, Fahy would automatically win the junior division by making the stepladder final. As she has shown all year, age was no barrier for Fahy as she defeated second placed Chloe Jones 215-179 in the first stepladder.

“It feels so good to win again! This weekend was a struggle both physically and mentally. It was definitely a grind in the eight games on Sunday but I couldn’t be happier with the result in both divisions” Fahy said.

A 2019 highlight reel featuring achievements such as Australian Junior Master winner, Sydney Youth cup champion, team member of the Victorian President’s Shield Girls and Overall winning teams, President’s Shield All Star, 2nd place at Werribee Youth Cup, 3rd at Queensland Junior Cup, and representing the country at the Asian Schools Championship is making the year one to remember for Fahy.

“My 2019 season has exceeded all expectations I could ever have for myself, it has been such a tough but amazing year” said Fahy.

A successful season cannot happen without those that support the bowlers through the ups and downs of a year, Fahy appreciates how important the support is.

“The support from everyone back home is definitely a big factor in my performance. Knowing that no matter what, they will still support me unconditionally is really comforting” explained Fahy.

Simon Pearce, a coach of Fahy’s in the National Training Squad and Victorian state team has had a profound impact on her game.

“I couldn’t have achieved what I have this year if it wasn’t for Simon Pearce. I am so incredibly grateful for all the time and effort he puts in for me to be at my best” said a thankful Fahy.

After defeating Jones, Fahy then faced North Queenslander Ivy Dickinson in the stepladder final. Not putting a foot wrong all weekend, Dickinson defeated Fahy 247-204 to be crowned the SA Youth Master.

A silver medallist at the 2018 Asian School Championships, Dickinson set high goals for herself in 2019 and her performances have not always met those expectations.

“After a couple of disappointing results this year, I had to remind myself that life’s a climb, but the view is great!” explained Dickinson.

Dickinson made the decision to enter some Open division ranked events this year to help in her bowling development. Bowling in the Fishing & Outdoor World Ladies Classic, Dickinson finished third behind some of her idols in “Bec Whiting and Bek Martin (BecSquared)” and it has helped her understand what is required to continue her path as a bowler.

“After bowling with some of the best ladies in bowling earlier this year, I became even more motivated to work on my mental and physical game in order to compete just as well as them” Dickinson said.

“I’ve had to learn and am continuing to do so, the enjoyment of the game, which I believe was a key factor in this weekend’s win paired with continuous hard work and determination”.

With a target of the top 12 qualifiers making stage 2, the boys commenced their qualifying efforts on Saturday.

Bernie Grueso Jr was the leading man at the conclusion of stage one.  Grueso Jr averaged 216.2, bowling 2,162 over 10 featuring a high game of 268.  South Australian, Jay Davy, sat second, 7 pins behind the leader whilst Kyle Annetts rounded out the top 3 bowling a 2,140.

Stage 2 saw a big jump from Callum Borck who scraped in as the 12th placed qualifier after day one, jumping to 5th overall which included an event high game of 277.

The top 4 positions at the end of stage 2, mirrored the results of stage 1. Defending champion Dinham would miss the chance to go back to back by remaining in fourth place behind stepladder finalists, Grueso Jr, Davy and Annetts.

“My biggest key for the weekend was staying patient. I really focused on staying in the moment and paying attention to my ball reaction. Grinded through the tough pairs and tried my best to take advantage of the good ones. Used a trick layout on a HyRoad I drilled before the event to allow me to play more direct and give me control on the backends for the title match and every situation I found myself on fresh oil” explained Grueso Jr.

The two handed bowler has had to wait a while since his last national title with that occurring in 2017 when he won the Werribee Youth Cup.

“It feels extremely rewarding to be able to win both divisions of the SA Junior Youth Masters! A national title has been something that I have been striving towards for years now after a drought” said Grueso Jr.

In 2018, Grueso Jr took a break from bowling for a few months due to not being in the ‘right headspace and not enjoying it’.  Grueso described that the break provided clarity and an understanding of his love of the sport.

“The break showed me that bowling was a much bigger part of my life than I once thought it was. But more importantly, it taught me gratefulness. When coming back, it really emphasised how much I enjoy the sport and all the unique characteristics it has”.

“2019 has been a massive year of learning and growth for me. Every single event that I have competed in has taught me extremely valuable lessons. I’m a big believer in learning from my mistakes and losses, 2019 has definitely been filled with a lot of learning” clarified Grueso Jr.

The next and final junior ranked event will head to Tenpin City, Lidcombe when the Sydney Junior Cup will conclude the 2019 Junior Ranked events on the 4th-7th October.

The Grand National Youth Eliminator at Caboolture on the 23rd – 24th November will close the book on the Youth ranked events for 2019.