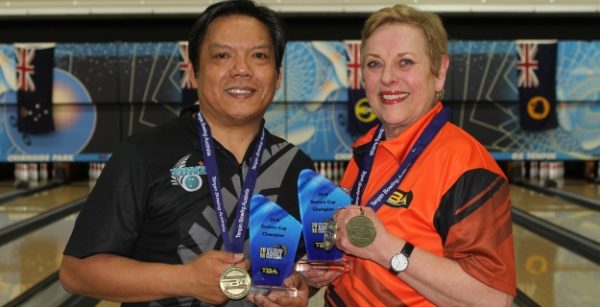 Seniors week at the 2018 Australian Adult Championships provided plenty of excitement with the overall team’s challenge being won by Victoria on the last day of competition with TBA Hall of Famer Jeanette Baker and Greg Nicolas being crowned the 2018 Seniors Cup champions.

With qualification for the Seniors Cup finishing on Sunday morning both Nicolas and Baker (pictured above) proceeded to the second round of qualifying.  With a further 8 games to bowl before the match play rounds Nicolas averaged 211 in stage 2 to sit in 7th place and only 80 pins behind leader – Andrew Thorpe.

But for Baker, stage 2 saw the 63-year-old assume top place by 53 pins from next best Julie Harrison.

In the match play, Nicolas won matches 1 and 3 to climb the leader board then finishing off with wins in matches 5, 6 and 7 to take the title by 32 pins from second placed Thorpe.

In the women’s match play rounds, Baker came out of the blocks firing winning matches 1 and 2.  After not taking any bonus pins in match 3, the Victorian won matches 4 and 5 and with scores of 217 and 192 in 6 and 7, it was enough to see Baker win her 8th Seniors Cup title with Mary Dodds finishing in second.

On Tuesday, the 12th Seniors Challenge began with New Zealand defending the overall title after taking the honours last year at Wyncity.

With a strong field in the women’s division Mary Dodds claimed gold with Sharyn Crouchen (QLD) in second and 2017 winner Jeanette Baker rounding out the podium.

On day two of competition, Victoria continued their charge to an overall win by claiming gold in the women’s doubles with Christine Clark and Robyn Flynn winning gold by 99 pins from fellow Victorians Mary Dodds and Jeanette Baker who took the silver.

In the men’s doubles A.D.F won gold with Brad Fullerton and David Edwards finishing on top with the narrowest margin of 4 pins from fast finishing Darren Burton and Chris Kirwan of the NT.

On day 3 in the team’s event, Victoria were in touching distance of the combined win and it was the Victorian women’s team who dominated the event taking gold by 234 pins from the ACT, with Western Australia winning gold in the men’s division and with Victoria taking the silver.

The results in the team’s event saw Victoria finish on top on the combined results with 1121 points, with QLD (969) in second and ACT (966) in third overall.