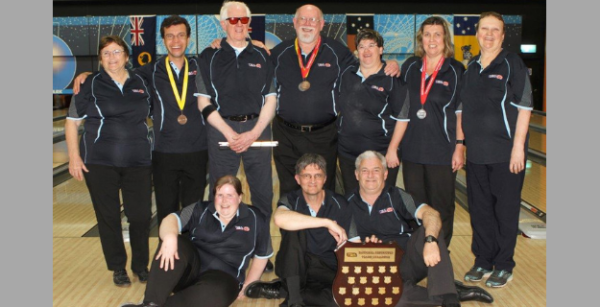 The 57th Australian Adult Championship got underway last week with NSW winning back to back titles in the Restricted Team Challenge and with Neil Robinson and Kate Juillerat winning the Restricted Cup in the first week of competition at the annual event.

In stage 2 of the Restricted Cup, Robinson had created a lead of 81 pins from next best – James Vrselja.  The Western Australian bowler averaged 168 across the 6 games to then move into the match play rounds.

In the match play rounds Robinson won three of the five matches which was enough to see the Rockingham bowler take the title by 84 pins with Peter Smith (2578) finishing in second and Graeme Clarke (2519) in third.

In the ladies division, overall winner Kate Juillerat had some work to do after finishing stage 2 in second place and 48 pins behind leader – Julie Townsend.  In the match play rounds Juillerat lost the opening match but hit back to win the remaining 4 matches, gaining 80 bonus pins to push past Townsend and take the 2018 title by 32 pins.

The National Restricted Teams Challenge began on Tuesday with NSW looking to win back to back titles in the event.

In the singles, Jai Ewins representing the NT shot to gold, edging out Glen Barwick of NSW by 44 pins, with Katelyn Smith of the All Abilities Team winning the girls singles title by 144 pins from New South Welshman – Reanna Skora.

In the doubles on day 2, NSW kept their combined title hopes alive with the pairing of Reanna Skora and Julie Townsend winning gold by 79 pins from the Victorian pairing of Kim Cook and Stephanie Wright.

In the men’s division, Jai Ewins won his second gold alongside Marty Sammut with the Victorian pairing of Leigh Polan and Ben Peacock (Victoria) in second and Michael McLaren and Glenn Corbett from NSW rounding out the podium in third.

On the final day in the teams event the Queensland men’s team narrowly edged out Holt by 39 pins to take the men’s gold with Tasmania stepping up to win the women’s team event by 55 pins from the Northern Territory.

This saw NSW finish on top of the combined team points finishing with 856, with the All Abilities Team in second (799) and Northern Territory in third (746).

Queensland took out the honours in the overall men’s division with the All Abilities team finishing on top of the combined female points table.

The complete list of results for the first week is available here.

Tamara Ford (ADF) and Mal Fawcett (ADF) were voted by their fellow bowlers as the most deserving of the Sportspersons Award.  Graeme Clark (HOLT) was awarded the Chairperson’s award and Julie Townsend (NSW) won the Directors award.