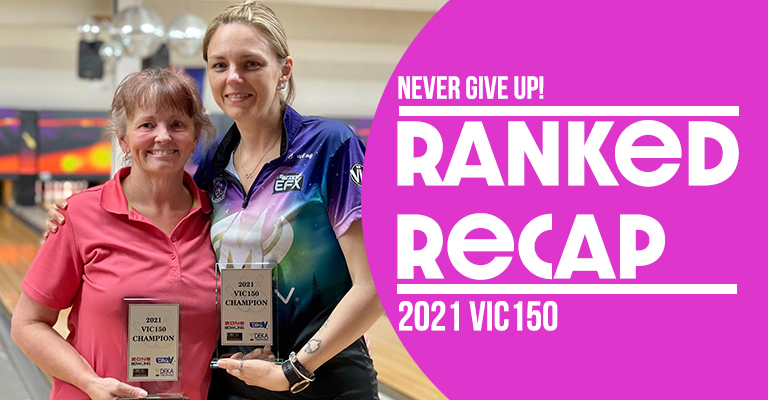 Martin Never Gives up on Quest for Maiden Vic150 title

If you needed proof to never give up in bowling tournaments, the 36th running of the Vic150 provided the evidence you need with Rebekah Martin, and Lisa Gaylor crowned the 2021 champions at Zone Bowling Keon Park in Victoria.

“I am still in a bit of shock that I managed to come away with the win. Relieved, happy and extremely proud,” explained scratch champion Rebekah Martin.

The Vic150 is one of the more unique events on the ranked event calendar. Like the Australian Open, all bowlers are tasked with 18 games of qualifying. Unlike the AO, the Vic150 has two divisions, scratch and graded. After qualifying, the top 12 of each division advance to the match play finals. At this stage, the event shows its real individuality by pairing both divisions together to form double partners.

Leading up to this year’s event, the eventual scratch champion Rebekah Martin felt she prepared as well as she could. Following a year with limited time on the lanes due to COVID, the Australian representative felt ready physically and mentally to attempt to win her first ranked event since 2019’s NSW Open.

“I have been working a lot off the lanes with my fitness, goal setting, lane play etc, so I felt confident. We had our state champs and masters leading up to this event all bowled on this pattern at the same centre. I had bowled extremely well in those weeks and had a good handle on what balls worked, how they broke down and my moves I needed to make. However, taking that all into account, I knew just having the girls on the lanes, I needed to treat this differently because the lanes break down differently,” explained Rebekah.

A realisation of not taking this into considerations as much as she should of, Rebekah struggled to get going on day one of qualifying and found herself at the bottom of the field with many pins to make up.

“I found myself in a complete mess. After a decent number of tears, anger and disappointment, I turned to what the task was ahead of me and knew with a great day I could still make the cut” explained Rebekah.

The improvement came on day two, and Rebekah began her climb up the ladder of 24 registered scratch bowlers. After day two qualifying, Martin would scrape into the match play stage finishing on the cut line of 12th place, bowling a total of 3,543 pins and an average of 196.8.

Rebecca Whiting was the top qualifier posting 4,053 with an average of 225 on her quest for her fourth consecutive Vic150 title. Rounding out the top five qualifiers heading into match play was  Jamie-Lee Spiller, Kaitlyn Commane, Rebekah Commane and Dena Buxton.

“I got told I was paired with Lisa and couldn’t have been happier”, explained Rebekah. “I have known Lisa for years and knew she has just come back after a long break away from the sport. I also knew that due to the event’s format, we were all put back to a fairly even playing field but still had a fair few pins to make up. Lisa has always been a gutsy bowler with a never give up attitude, and we worked so well together, always having each other’s back and encouraging each other as we went. I knew this meant as much to her as it did me”.

In her first ranked event for over 12 years, Lisa Gaylor has a long history with the sport. Lisa’s resume included Rachuigs for Victoria, making the final of the South Pacific Classic in 1993, and plenty of Dunn Shield representation from 1998 onwards.

“Over the years, I have been fortunate to bowl with and against some of Australia’s best female bowlers – Cara Honeychurch, Ann-Maree Putney, Amanda Bradley, Sue Cassell. This weekend was no different alongside Bec Whiting and partnering with Bek Martin – it was sensational and a dream come true,” explained Lisa.

In 2009, after bowling her first and only 300 game, Lisa retired from bowling to start a family. A benefit of our sport is that it’s one for life. After 12 years retired, Lisa was ready to return to the lanes.

“I have always thought about making a return as I love our sport. Now that my son is 10, I felt the time was right as he didn’t need every bit of my time,” explained Lisa.

In her retirement year of 2009 also came her last ranked event participation, the 2009 Vic150. A tournament she enjoys for many reasons.

“I like the concept of a Scratch Bowler pairing a Graded Bowler. It was bowled in a Centre that I have a connection with, and the Tournament Director Sue Raphael is a long-time friend of mine,” explained Lisa. “The concept, there isn’t a lot of tournaments out there for graded bowlers and with me just returning I thought it would be a great event to see how I went & if I still had the love for our great game as I knew I wasn’t anywhere near my ability before retirement. Yes, I still love our great game & once I started, I found the beast mode in me come back a little”.

Beast mode was activated as Lisa finished the graded division’s top qualifier posting a handicap 3,909 18 game total averaging 170.2. A count above her entering average of 147. Her performance on top of the graded division would initiate pairing with the 12th placed scratch bowler Rebekah Martin in the match play stage. The pairing excited Lisa due to a long history with ‘Bek’.

“I have known Bek for over 20 years (could be even longer) when she was a junior bowler”, explained Lisa. “Even though I was away from bowling, I still took an interest in Bek’s bowling & her achievements. I have also known her partner Adam for over 30 years. When I decided to return to bowling Bek & Adam were very generous in helping me out with some equipment as they didn’t want me to spend heaps of money if I didn’t enjoy my return, and for that, I am forever grateful. I felt very proud & honoured to be paired with Bek”.

Rebekah and Lisa’s pairing would immediately announce themselves as a contender right out of the blocks posting a 415 in the first game, the highest of all the matchplay pairings for game one.

Remaining focused on their climb up the standings, Rebekah had avoided seeing any scores up until coming up to the last game. Kaitlyn Commane and Lilly Crocker’s pairing began to make a run with a string of strikes providing loud cheering to prompt Rebekah to view the standings for the first time.

“I found out we were playing Bec Whiting and Caitlin Simmons in the last game, who was currently second, and we were only 30 odd pins in front of them. As the strikes continued from Kaitlyn and Lilly, I knew we needed every pin” explained Rebekah.

The result came down to the last frame to take back the lead. Lisa struck out and Rebekah needed at least the first strike and good count. The result, Rebekah finishing with two strikes in the 10th to secure the win.

“Nothing like the adrenaline of a close finish to make sure you’re alive” joked Rebekah. Partner Lisa was over the moon with the win.

“It was fantastic to win with Bek, because I know how important it was for her to have this title against her name” explained Lisa. “Bek is a very talented bowler. No matter what kind of a day she is having on the lanes, she is always able to bounce back the next day. Bek’s best is right up there with the current stock of female bowlers”.

For Lisa, the comeback win was everything she could ask for and being paired with Rebekah Martin made it all that much special. “It’s a dream come true, and to return as a graded bowler, it could have been very easy to let my pride and ego get in the way. It’s not an easy return, as I am not at the level I once was. The support and motivation from Bek yesterday are what kept me going when I hit that brick wall in game ten.  That was always going to happen with 29 games in 3 days since 2009. It’s a big achievement. I can’t thank Bek enough for all her support and encouragement. This win for me will be right up there forever.” explained Lisa.

Four-time winner of the event Rebecca Whiting did not disappoint throughout the event either. Awarded the highest average award after dominating the field on day one in qualifying with an extraordinary 242 average.  Partner Caitlin Simmons and Bec finished in third place, just behind the second-place getters and fast-finishing Kaitlyn Commane and Lilly Crocker. Rebecca Voukolos was awarded the Christine Webster Sportsperson award.

The next national women’s ranked event is the QLD Ladies Classic scheduled for the 15th-16th May 2021 at Caboolture Bowl & Mini Golf in Queensland.