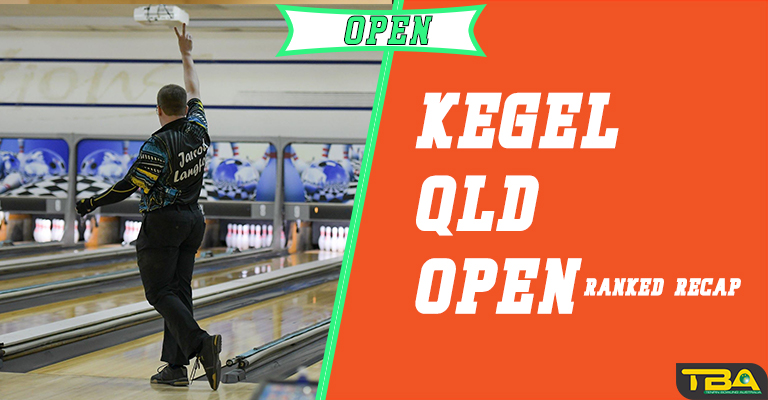 The King of the North – Jarrod Langford has claimed the 2020 Kegel QLD Open, successfully defending his 2019 title and becoming back to back champion.

The nickname—‘The King of the North’ is one that makes sense.

Langford resides in Ayr, QLD. A town in the Shire of Burdekin in Queensland with a population of just under 9,000 people. Burdekin Bowl is the home centre of the 23 old Australian representative. A 12 lane centre in the north of Queensland. A bowling centre he also works at whilst studying to be a primary school teacher at University.

“My home centre is a great little bowl. I haven’t experienced a centre quite like it in any country yet” described Langford. “I can’t really explain what I love about it but it’s my home and it’s always there for me– my bosses who own the bowl, Angelo and Frank Nucifora, have made it possible for me to always bowl and practice whenever I have needed it”.

The combination of Langford’s residence, bowling talent and popular TV show ‘Game of Thrones’ were the ingredients that created the nickname.

The Kegel QLD Open is the first nationally ranked event on the open division calendar. The Queensland centre of Caboolture Bowl & Mini Golf would again host the event. The venue and continued support from Kegel Australia (Tenpin Tech) makes it a ‘must attend’ event every year in the tournament season. This year would mark the 10th running of the event after starting in 2011.

“It’s just one of those events that I love bowling in” said Langford. “Being the first event in the country for the year and it’s in my home state –which is always a reason it makes it better”.

This year’s event would see 107 entrants competing in the three day tournament at the 18 lane centre. All bowlers would bowl 12 games in two blocks of qualifying. The top 32 qualifiers would then progress to stage 2 bowling an additional four games. The top 16 would then bowl a further 4 games before a three rounds final system would be implemented.

The open division ranked event would be open to all TBA members. The strategy leading into the tournament can differ for everyone. The defending champion would elect to stay in the present moment.

“I didn’t want to have any preconceived notions on how the pattern would play. Play the lane in front of me, not the pattern released. It obviously worked well” explained Langford.

Qualifying involved four full squads, with the first kicking things off on Friday night. A trio of Queenslanders would reveal themselves as the top 3 qualifiers.

Jayden Leming would be classed as top qualifier bowling a total 12 game pinfall of 2,798, with an average of 233.2. Jarrod Langford would sit closely behind on 2,782 and Minhee Kim in third place with 2,731 pins. Langford and Kim would again help to set the pace for the 2020 event after being the final 2 bowlers in 2019.

Australian team duo of Leming and Langford would bowl an impressive +398 and +382 respectively in qualifying.

“My qualifying was very good” stated Langford. “I executed well through the first 10 games and just grinded out the last two. I was very impressed but I have also generally bowled well in the qualifier for the Kegel”.

Langford wasn’t lying. In 2019 he would qualify with 2,829 (avg 235.8).  In the last six years (including this year), Langford averages 224.75 in the qualifying stage. Consistent performances that has made Langford one of the most feared on the tournament scene.

Another highlight for stage 1 involved Australian team member Bec Martin. The bowler from Victoria would bowl the highest game of qualifying with a 299 game in her seventh game. After two days of qualifying the bowlers were cut to the top 32 to commence stage 2.

An additional four games were on the agenda for the top 32 bowlers. A reshuffle of the top 3 saw Jarrod Langford head to the front, Minhee moving to second and Leming drop to third. Langford would bowl +85 in the four with a 262 high game.

Two other Queenslanders would make a mark in stage two. Brendan Meads would be the best performing in stage two. The two time Kegel QLD Open champion in Meads would bowl a notable +145 in the block, a total of 945 pinfall in the 4 game series. The other Queenslander that made his move in stage two was Morty Douglass. The Toowoomba Sunset Superbowl manager would bowl +136 in the block, a total of 936 pinfall. The performance would catapult Douglass from 18th highest qualifier to 8th. The jump would solidify his position to the next stage. The top 16 would progress to stage 3 for four more games.

The first game of stage three saw the King of the North stake his claim on the tournament. Langford would bowl the first perfect game of the tournament. The impressive bowling didn’t stop there. Langford continued his stage 3 highlights show by following the 300 with 265, 246, and 238, a total of +249, a 1049 four game series.

“It was one of my best games execution wise this tournament” explained Langford on the perfect game. “My last 300 would have been in the 2018 Mackay Open. I managed to keep on top of my emotions and not let it overrun me”.

The top 8 qualifiers would qualify for finals. A finals system that mimics the football codes format. Round 1 would see the top 4 bowlers bowl against each other–1v4, and 2v3. The winners to receive a round 2 bye and a loss to receive a double chance. Elimination games would be in play for 5v8 and 6v7. All finals games for round 1 would be best of 3 games.

The number one ranked Langford would be matched against number four- Brendan Meads. To gain the number one ranking, Langford had a total tournament pinfall of 4,716, an average of 235.8 over the 20 games and a performance that was 202 pins greater than the next best – Minhee Kim.

As with all sport, finals, can be a whole new ball game.

Winning the tournament in 2012 and 2014, Meads knows what it takes to go all the way in the event. He would use the first round matchup against Langford to remind everyone that he was a threat yet again. Meads would by defeat Langford 223-172 in the first game of three. The 172 game would be the lowest game of Langford’s weekend. Langford would strike back in the second game before losing in the third game. Meads would win the battle – 672-599. The loss for Langford would knock him off the number one seed in the finals system allowing Meads to snatch the advantage by receiving a round 2 bye.

“I think I needed a wake up just to reset myself- I needed to get back to the correct headspace quickly” described Langford on what the loss to Meads did. “My execution was very poor in those first 3 games. That slip up probably helped propel me back into the game”.

The 2v3 matchup featured Minhee Kim and Jayden Leming. The matchup would be be won by Kim 437-348 in two games.

The elimination games featured Victorian David Porto (6) defeat Jaimie-Lee Spiller (7) 428-419. Ashley Warren (5) would defeat Ballina bowler Andrew Clark (8) 518-479. The win for Ashley Warren highlighted by the second perfect game of the tournament in the first game of the matchup.

Round 2 of the finals would see the matchups return to one game elimination matchups. After a round one loss, Langford would return with a vengeance against the hot bowling Ashley Warren, defeating Warren 256-235. Jayden Leming would edge out Porto by three pins winning 204-201 in the other matchup.

Remaining with the straight one game elimination format, round 3 would see the preliminary finals take place. After receiving the round two bye, a fresh Brendan Meads would defeat Leming 258-162. The other final would see a rematch of the 2019 championship title match in Langford bowling against Minhee Kim. Again, Langford would edge out Kim 224-207.

“The title match repeat was always something that was going through my mind in that game” explained Langford. “I wanted the same result from last year. I managed to get the win at the end but it really could have gone either way”.

The championship final was set – Meads Vs Langford.

“I just wanted another chance against him’ explained Langford. “Once I made it back there, I was going to put all of my energy into that game. Falling short before didn’t really affect me, I knew it was a new game. I had a new plan. It worked and got away with the win”

“It feels awesome to go back to back” said the 23 year Australian representative. “I’ve only won one nationally ranked event back to back (Melbourne Cup) and to now do it in my own home state is just extra special.

“My key to success was simply to not to get overconfident or overexcited” explained Langford. “If that happened, my execution would be affected”.

Equipment and conditions are always two things that are discussed and debated.

“I used the Purple Hammer Urethane, Ebonite Destiny Solid and the Omni through the weekend” described Langford. “The conditions were difficult if you did not execute well. If you matched the ball to the pattern and executed well, you would be fine”.

Langford will now head overseas to bowl some international events. First on the itinerary is the United States of America. During his stay in the US, Langford intends to bowl some regional events, the USBC Championships and USBC masters.

This adventure coupled with recently being selected for the 2020 Australian Asian Championship team has Langford very excited about what’s to come.

“The team selected for Asian Champs has me excited!” explained Langford. “I’ve bowled in various teams with all the bowlers before, except for Krinis (Matthew), but Krinis and I have been good mates for years and I’m excited to be able to go away in the green and gold to represent our country with them”.

Langford’s goals for 2020 is the same as every year.

“Be my best at every event, I don’t want to be an easy beat. Also, to get away with the national rankings this year would be a dream” said Langford.

The next nationally ranked event in the open division is the Australian Open at ZONE BOWLING Keon Park, Victoria on the 10th-12th April. For information regarding this event click here – The event will be run in conjunction with the second Women’s division tournament of the year in the Vic 150. For more information regarding the Vic 150 click here

Tenpin Bowling Australia would like to thank Lyn Fletcher from Living & Loving Photography for the wonderful pictures of the weekend.