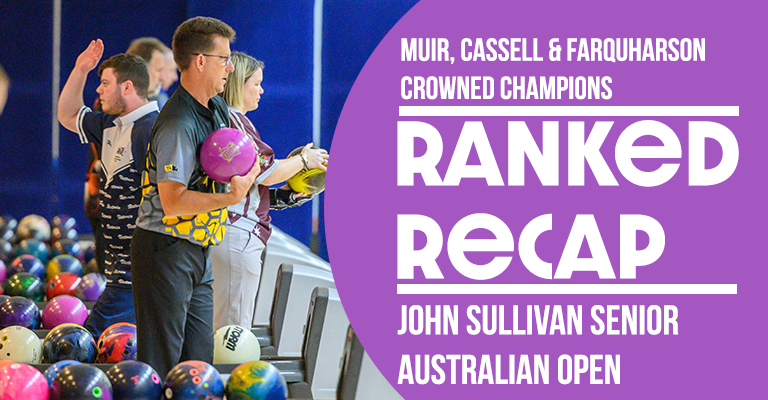 Tournament bowling returned on the weekend for senior bowlers at ZONE BOWLING Keon Park, where three champions were crowned at the John Sullivan Senior Australian Open.

This year would be the second year the Seniors Australian Open would be attached to the Tenpin Bowling Australia Hall of Fame member and bowling legend- John Sullivan.

Known as a fierce competitor, incredibly accurate and a smooth bowler to watch, ‘Mr Magic’ John Sullivan was an incredible talent that saw him represent Australia and achieve a level of excellence that would span decades.

Inducted into the Hall of Fame in 1989, John was a massive supporter of the tournament and the ATBSO Victorian association. In recognition of this, the association wanted to honour the great Australian bowler who was well accepted and liked within the community.

Western Australian Michael Muir would reign supreme in the hotly contested Senior Men’s division. A total of 41 bowlers would line up in the division to bowl 16 games over two days to find the 2021 champion.

The second and final day would see a group of bowlers jostling for positions. His tussle with Graeme and many bowlers kept Michael on his toes, but setting a high enough score in the morning squad for others to pursuit was all he could do.

“It was just a matter of posting a good number and seeing whether Graeme and the other bowlers could chase it down. Fortunately for me, luck was on my side, and it was enough in the end”, explained Michael.

Michael would finish the event with an average of 224.2, posting a 16 game total of 3,587. The return to the lanes and competing for national titles is something Michael was grateful for.

“It was fantastic to be out there competing again. It’s been 12 long months almost to the day since we’ve been able to travel and bowl in a tournament. It really makes you appreciate having the opportunity to bowl again,” said Michael. “It’s always nice to catch up with friends I have met over the years, but more-so now since we haven’t seen each other in such a long time. Tournaments are not just about the bowling, but about catching up with friends from all over the country”.

Like so many, Michael has many memories of John Sullivan. The memories and experiences shared continue to add to the tournament’s prestige and solidify Sullivan’s standing as both an all-time great bowler and person in the bowling community.

“He is very special to me. When I first entered adult bowling, Sulli was the benchmark of bowling here in Australia and one of my idols that I looked up to. He was always friendly, helpful, and encouraging and one of the first to congratulate you after a win. One of the fiercest competitors on the lanes and the nicest guy off the lanes”, explained Michael.

“To have a tournament named after a guy that I looked up to, and to win the event is extremely meaningful to me” added Michael.

A forced break with bowling has not been all bad for Michael. It has provided a time to reset and train in anticipation of getting back on the lanes.

“The key to the weekend’s victory was the time I had during Covid to reconstruct my bowling game and to work really hard with my coach Ken Thompson” explained Michael. “We have done copious amounts of training over the past 12 months both on and off the lanes. I’m also very fortunate to have such a brilliant Pro Shop team in Paul Delaney and Bree McPherson from Pauly’s Pro Shop who always get my gear right and supply me with the best bowling balls to match my game”.

Placegetters for the Men’s division would be a pair of Queenslanders in Graeme Morgan (3,535) and Tony Hamilton (3,491).

The Senior Women’s division saw a familiar face rise to the occasion and claim the first title in 2021 for the senior’s division.

After returning to the sport in 2020 and claiming the Hammer QLD Seniors Classic title early last year, Cassell would be edged out in her second event at the 2020 John Sullivan Senior Australian Open by fellow NTS member Christine Clark. The latter winning her second consecutive title at the event.

This year, the Tenpin Bowling Australia Hall of Fame member would go one step further by claiming the 2021 Women’s division title.

After only leading by seven pins after day one over Queenslander Cheryl Womack, Cassell would push away on the second day.

The Hall of Fame member would average 203 for the event, posting a 16 game total of 3,248. The score a dominant one, with second-place Victorian Robyn Flynn, posting 3,093, 155-pins behind Cassell, cementing another national title for Sue on her comeback to the sport.

Inducted into the Hall of Fame in 2012, Cassell has an extensive list of achievements in the sport. Enormous state representation and success, national selection and achievements involving winning three  Gold medals, two silver and two bronze in international competition saw the Hall of Famer being named the World Bowler of the Year by the World Bowling writers association in 1990.

Yet since her return, it has become apparent that the game has changed. In other ways, it remains the same.

“I’ve always been a firm believer that your mental game is the biggest part of bowling once you get to the representative level.  The technical element has definitely changed, and for me, it is like going back to school and trying to learn Algebra, Chemistry and Physics all over again – and the brain isn’t liking it too much”, explained Sue.

As a member of the Senior National Training Squad, the opportunity to don the green and gold once again is something that Sue dreams of achieving once again.

“Most Definitely – There is nothing more special than wearing your state team colours or the Australian Team colours and competing with a group of people who are all on the same page and have the same goal”, said Sue.

Farquharson was thrilled with capturing the title yet equally thankful to enjoy the benefits attached to tournament bowling once again after the COVID-19 forced break.

“I felt excited to not only go to this event but to see the many friends that we haven’t been able to catch up with”.

After placing third in the John Sullivan Seniors Australian Open Grand Seniors division in 2020, the bowler from Bendigo would go all the way in 2021, averaging 222.4, posting a 16-game total of 3,558. The score an increase of 136 pins over his 2020 performance. David credits the improvement to a number of people that provided support and guidance for the event.

“I am very thankful for a few people – Paul Delany for putting great fitting gear in my hands. Bob Whybrow for taking the time and effort in helping me on Friday night practice before the event. During the event, Andrew Lloyd helped me when things looked to go south and steered me in the right direction. Finally, my wife Tracey, for supporting me and giving me ‘the look’ when I needed it”, praised David.

“John was a wonderful, friendly family man.  He was always up for a chat, great sense of humour, and never had a bad word about anyone.  He is severely missed by many, many people.  I am honoured to win an event in his name”, explained David.

The win for David will provide a welcome boost for future events in 2021.

“This win will give me the confidence to go into the next event in the best mindset.  Great bowlers are bowling these events, so I will have to be at my absolute best”, explained David.

Farquharson has represented and medalled for Australia twice at the Asian Seniors Bowling Championships in 2011 (Guam- Bronze Teams) and 2014 (Philippines- Gold Singles). Now, a member of the Senior National Training Squad, Farquharson aims to get another chance to bowl for his country.

“It was an absolute honour to represent Australia in previous years, and I would love to again” explained David. “ In two years time the Senior Worlds will hopefully be back on the calendar, and I am hopeful that Australia will consider putting a team forward for the Grand Senior section.  We have some great Grand Senior bowlers, who I am sure will be very competitive in bringing home some medals”.

The other placegetters for the Grand Senior division at the John Sullivan Senior Australian Open would be a couple of Victorian comrades in Mick Talevski (3,544) and Merv Billing (3,293).