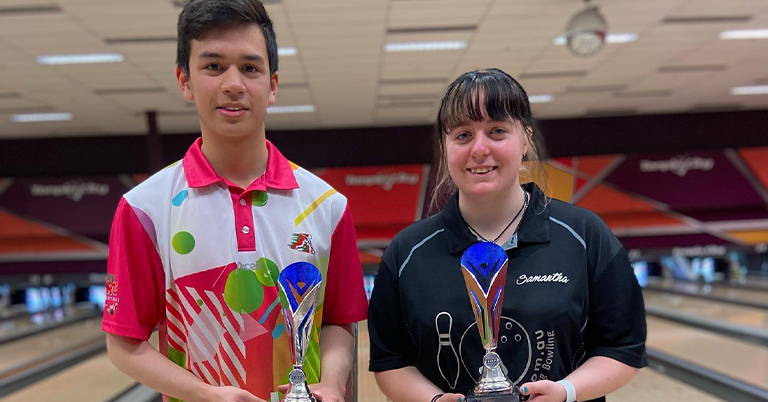 In a nail-biting stepladder final series, Sam Clifton and Justin Dinham took out the 2022 Junior Storm Sydney Cup titles at Tenpin City in New South Wales on the weekend.

With most of the NTS18 group travelling in New Zealand, the 2022 Junior Sydney Cup was set to be a competitive contest with an opportunity for new winners to be crowned. That’s exactly what happened with the two champions claiming their first-ever ranked event titles.

One of a handful of bowlers from the NTS18 that didn’t make the New Zealand trip this year was Samantha Clifton.

A local bowler from Dullboy’s Social Co. in New South Wales, Clifton has had an impressive 2022 season on the lanes finishing in the top 10 of several ranked events in both the junior and youth divisions. The long-time goal of winning a ranked event providing joy to the victor.

“It’s been a goal for me for many years” said Clifton to Dion Alexander at the end of the event. “Eventually I got there, and it makes me very happy that I have achieved that goal”.

Averaging 193.3 over her first 12 games in qualifying, Clifton would enter stage 2 as the top qualifier. In the four-game stage two, Clifton would maintain her lead heading into the match play section.

Clifton won three of the five match play games with bonus pins on offer to cement her spot as the number one bowler for the stepladder final. Samantha finished on a total pinfall (including bonus) of 4,133.

The stepladder saw second place Shanae Key face Emily Hart in the first 2v3 round with Hart progressing with a 202-185 victory. In the stepladder final, Clifton would be initially defeated by Hart 233-190 requiring a repechage match to be played.

In the repechage, it couldn’t get closer. Emily Hart missed a crucial double allowing Clifton to win their battle 182-179 to take the title.

Local knowledge came in handy in the male division with Justin Dinham taking out his first ranked event title in his home bowl – Tenpin City, Lidcombe.

The younger brother of Jordan, Justin has begun to make a name for himself in 2022 with several high finishes.  Finishing fourth in the Werribee Youth Cup, a runner-up at the Queensland Junior Cup and equal 11th at the Sydney Youth Cup, the 16-year-old is following in the steps of his older brother who also won the event a few years ago.

“It means quite a bit because my brother won it a few years ago so for me to win it as well is great,” said Justin to Dion Alexander following the event.

Dinham would finish the third top qualifier after the first twelve games averaging 196.3. Ahead of him was Brock Gordan from Ballina and Travis Kloer from Logan City Tenpin led all bowlers as the top qualifier averaging 204.4 over 12 games.

The top 12 would progress to stage two for four further games. Kloer would maintain his lead heading into match play while Dinham climbed to second spot. Victorian Seth Gray would make the highest climb finishing in third place after finishing in eighth position after qualifying.

With bonus pins activated in the match play section, Dinham cemented the top spot heading into the stepladder finishing on a total pinfall (including bonus) of 4,239 winning three of his five encounters.

It was a tight tussle between the top four to make the stepladder final. Local Sean Lam narrowly missed out by 19 pins. Even after winning only one of his five matches in the match play section, Kloer would not drop far finishing in second spot. His opponent to be in the stepladder would be Seth Gray who continued to finish strongly at the conclusion of the event. Gray would win four of his five matches collecting 80 bonus pins.

Travis Kloer’s best run at a ranked event would end in the first step ladder losing to the in-form Seth Gray 269-138.

Dinham would not waste time claiming his first title in the title match. In a nail-biting finish, like the girl’s repechage, Seth missed a double allowing Dinham to take the title in a 184-181 scoreline.

Congratulations to the top 3 bowlers in the under-13 division.

Victorian William Zaccaria won the title by 167 pins over Jayden Tran in second place and Zavier Trajanovski in third. William also qualified for stage 2 in the open division. Way to go William!

Thank you to Dion Alexander and the team at Tenpin City who provided the photos and check out their Instagram page for some videos with the winners over the weekend. https://www.instagram.com/tenpin_city/