Pathway to Improvement Includes Giving Back 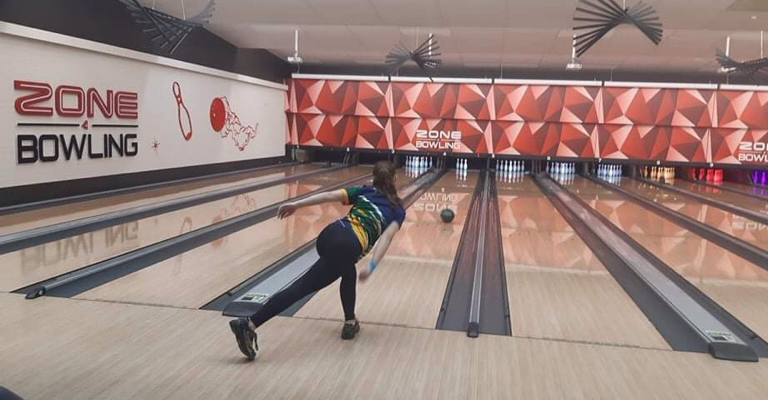 Whilst there’s no single secret to perfecting your game, there’s something to be said for those bowlers who see meaningful improvement in ‘giving back’ to the sport. Whether that’s in the role of friend and mentor to newer bowlers, taking up the pathway of coach, or finding volunteering to help the local association; it all adds up.

Meet Emma Blunden, whose commitment to the sport saw her win the honours at Western Australia’s first-ever Women’s Tournament – LiveLighter WA Tenpin Bowling Ladies’ Challenge. Bowling a Personal Best of 278, she bagged nine strikes in a row to later help her team win the overall title at the historic Tournament.

Rather than being disappointed about missing out on the perfect game, Emma remains driven. “Now that I got so close, I know it is in my reach – I’m more determined than ever!” Emma’s first official average was just 13, after following her two big sisters into the game when she was only seven years of age. Emma first represented Western Australia at the 2019 Australian Junior championships and was recognised in the same year as WA’s Most Improved Junior Bowler at only 14 years old!

As the pathway can often lead, she was delighted to be selected in the National Training Squad for the first time this year. Tenpin Bowling WA’s Sport Development Officer Mia Buswell asked how she prepared for the event; “Tenpin is an endurance sport. I fuel up with a high-carb meal the night before and along with a lot of training, it helps me maintain my focus and energy for the full 11 games of the Tournament.” Emma currently trains three times a week and competes in two separate Leagues.

It’s worth mentioning Emma is only 16 now but is already giving back to the sport she loves. She has volunteered her time, delivering Tenpin Bowling programs in the school holidays, to young people through the Bowl Patrol program. These participants had a connection with Autism Western Australia and Emma was fantastic for them, she’s well on her way to completing Bowl Patrol’s online Lane Ranger qualification.

This young lady is athletic, committed, and cool under pressure. Her dream is to represent Australia and bowl in the PWBA – with dedication like this, we’re pretty sure she’ll get there!

Special thanks to Tenpin WA and Mia Buswell for collaborating with Emma on this story. Have you got a great story about your pathway in bowling like Emma? Share it with us! Email [email protected] (under 500 words, include two images of high resolution) to be considered.