NSW Prove a Class Above at National Disability Championships 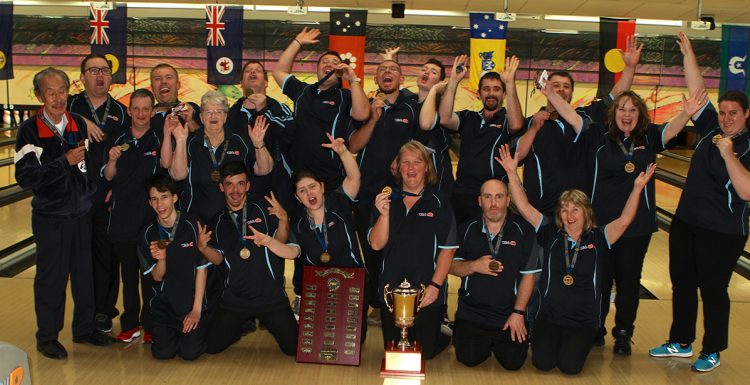 New South Wales have won the 2019 Cole Cup and Open State Team Challenge at the National Disability Championships in Canberra.

Following seven rounds in each event, New South Wales proved the dominant State finishing on 29 points in the Cole Cup, two points ahead of next best Victoria and the ACT in third.

On Friday, bowlers competed in the Open Masters, with New South Welshman James Sitters claiming back-to-back victories in the event after taking home last year’s title.  After leading the qualifying rounds Sitters watched Kallan Strong and Adam Sutherland battle it out in the first final with Strong finishing the victor 223 to 163. Strong went on to defeat Sitters in the opening match 214-192 to force a repechage match where Sitters hit back with a 278 game and with Strong bowling 215, Sitters took the 2019 title.

In the Restricted Masters, Paul Bell sat in second place behind Katelyn Smith which saw the Western Australian bowler draw Graham McGee in the opening match of the stepladder final.  Bell finished the match as the victor winning 262-229.  In the final Bell’s confidence was high and he forced the repechage match after defeating Katelyn Smith 255-229.  In the repechage, Bell continued his stepladder-winning streak taking the title 286 to 230.

In the Classic Masters, Nicholas Jefferson finished on top after qualifying and waited to see whom he would come up against in the final.  In the first match of the stepladder final, Zac Marshall and Jyrah Sammut went head to head.  With a 237 game Marshall took the win from Sammut who shot 173.  Progressing to the final Marshall came up against Jefferson and with a 217 game Jefferson took the title by 17 pins in the final.

For all the results from the Open, Classic and Restricted Masters visit www.tenpinresults.com.au.