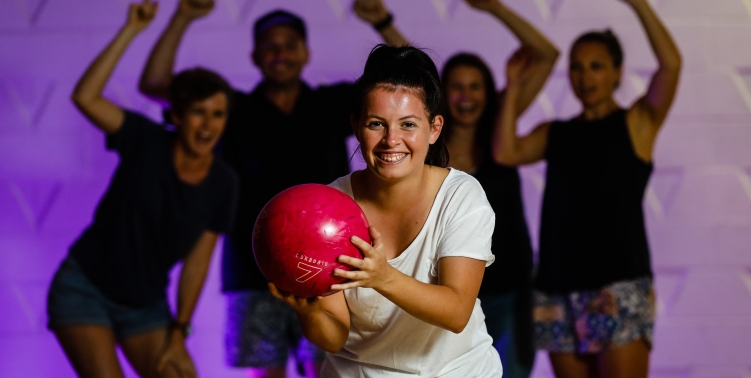 What is a League?

The term ‘league’ refers to an event where several teams bowl against each other in friendly competition. It’s an opportunity for people to gather together and play the sport of tenpin bowling in an organized manner on a regular basis.

Leagues range in size from single players, doubles format, triples, four and five person teams. Leagues generally bowl every week on the same day at the same time, but in recent times, there are those which bowl once a fortnight or even once a month. Most centres also have what’s known as a ‘Phantom League’, for those bowlers who may not be able to make it on the same day and time each week due to work commitments, for example. Phantom leagues allow bowlers to come in any time throughout the week and bowl their games.

League affairs are conducted by officers elected by the bowlers, or by the bowling centre management and staff. Leagues follow established rules, but can add their own when necessary.

H4 This is a heading

A league organises its season so that every team (one, two, three, four or five players) plays every other team usually twice, according to a draw. In this manner, members get to know each other in the nicest possible way – by bowling together! At the end of each season, trophies, prizes* etc are handed out to recongise both team and individual achievements such as league champions and high individual game.

New members are always welcome in a league – it means new friends for everybody! Don’t worry if your average is low as most leagues are handicapped so that the lower a bowler’s average, the higher their handicap. This allows people of all abilities to compete on an even playing field.

In traditional bowling leagues, each team plays three games per visit however there are two and even one game leagues particularly for juniors. In the first week of the league, the average and handicap of each player is set but in some leagues this can take up to 3 weeks.

*varies from centre to centre, so please check with your local centre