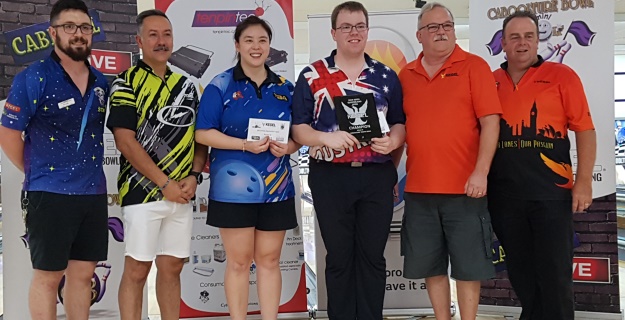 The newly developed finals format made for an exciting finish to this year’s event. The top 8 players (made up of 4 ladies and 4 men) competed in a 2 game eliminator. Langford qualified in first place and drew Bec Whiting, who qualified fourth. Langford was out of the blocks fast with an impressive 2 game series of 534 (279 & 255) to Whiting’s 404 series (221 & 183). Langford’s win progressed him to the semi-finals where he waited to see who his next opponent would be.

Number 2 seed Minhee Kim also won her first match, defeating Alicia Melton 457 to Melton’s 348, progressing Kim to the semi-finals. Kim’s next opponent would be Bec Whiting who defeated Chris Haynes from New Zealand in the second round of the finals, 200 to 170.

The scene was set for a big semi-final with Kim the former Korean representative up against Australia’s number 1 Bec Whiting. A 202-192 saw Kim progress to the final match against Langford.

In the final and with the pressure on, Langford hung on to bowl 194 with Kim bowling 178 to win the 2019 Kegel QLD Open.

On Friday in qualifying Langford shot to the lead averaging an impressive 235 across the opening 12 games to lead the 91 strong field.

For the final standings visit www.tenpinresults.com.au