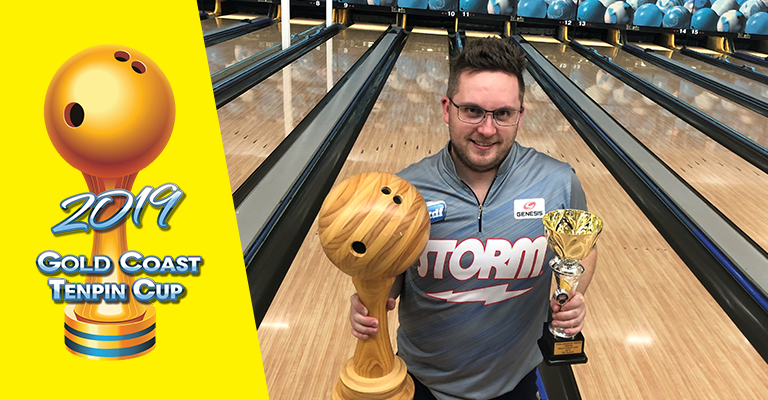 Victorian Chris Castle is the 2019 Gold Coast Cup champion after climbing the stepladder and defeating Minhee Kim 195-178 at Coolangatta Tweed Tenpin over the weekend.

After placing 7th at the Kegel QLD Open and 6th at the prestigious Melbourne Tenpin Cup, Castle has rocketed up the 2019 Open Division Ranking points table, following the win to sit second (189 points) behind current leader Jarrod Langford (280 points).

The Gold Coast Cup victory is not only Castle’s maiden win in 2019 but his first ranked event win since 2009 when he won the AMF Youth Masters in Tuggeranong.

“I’m still trying to figure out what’s happened!” expressed Castle after the victory. “After I just missed winning the masters last year my aim was to win a title. Especially after losing my dad last year everything bowling has been for me and him; if it wasn’t for him, I wouldn’t be where I am today”.

A tough 2018 has helped spur Castle to have one of his more enjoyable years of bowling. Castle travelled to the US at the start of the year to compete in the USBC Masters and Open Championship “It been a year to remember with finishing 3rd in the team event at the Open Championship. Also winning a team event and team all events at the Minnesota State Open Championships was an amazing experience”.

The Gold Coast Cup kicked off on Friday night and the squad’s on Saturday provided a glimpse of the eventual key players at the event. At the conclusion of stage one, three ladies led the way in qualifying.

Queenslander Alicia Melton led with a 2,176 pinfall and an average of 209.6 throughout the 10 qualifying games. Closely behind Melton was Logan based Minhee Kim and the Northern Territory star Rebecca Voukolos who produced 2,154 and 2,152 respectively. Two Victorian’s rounded out the top five qualifiers with Castle averaging 212 and Ryan Edgar 211.7 over the 10 games. Edgar threw the highest qualifying score of 282 in his third game.

The field of 74 was cut to 24 on Sunday with the top qualifiers progressing to stage two to bowl a further 6 games.

Pinfall carried over and so did the bowler seeds, with the top three ladies remaining in front with a reshuffle of placings. Queenslander Bec Meads continued to advance up the standings to 4th place from 7th, with the second highest stage two score of 1,294.

The ever reliable and decorated George Frilingos scraped in to the eventual top 15 cut, bowling 1,152 in the morning session and jumped 7 spots (from 22nd) from his original qualifying efforts.

Stage 2 concluded and produced the top 15 to compete in a 7 game, 3-way matchplay format with previous pinfall dropped. Bonus pins of 20 for first, 10 for second and 0 for third were on offer to help incentivise wins in the section.

The experienced Frilingos timed his run perfectly by making his move in the third game by throwing a 270 and averaging 216.9 throughout the 7 games to shoot up to second seed in the stepladder. Voukolos continued her impressive Gold Coast Cup debut by winning five games to sit in third. Meads cemented her best 2019 ranked event performance by claiming 4th.

Castle gained the 5th and final spot in the stepladder section by edging Jayden Panella by 14 pins and Alicia Melton’s great run ended by finishing in 7th place.

From Stage 2 onwards, it was Minhee Kim who consistently led the pack and was awarded the top seed and automatic title match spot after winning all 7 of her games in the matchplay round.

With a daunting task of needing five wins in a row to claim the title, Castle began his ascendance up the ladder by defeating Bec Meads 214-185 in the first. Next up, a tough Bec Voukolos stood in the way which Castle overcame 237-208 on his way to a semi-final berth.

The semi-final saw Castle take on George Frilingos. Finishing first, Frilingos forced Castle to finish on a double to take the win 202-195.

When asked on his strategy in the stepladder, Castle replied with “keeping the ball in play, be patient with my shots and make moves according to ball reaction. I started to see that early in the match against George so I got a little softer with my ball speed and a little more rotation”.

With all the momentum on his side, Castle continued his blitz by dismantling the top seeded Minhee Kim 195-178 in the title match. Unfortunately for Kim after dominating all previous stages, saved her worst game for last throwing a 178 which was her lowest of the weekend. Castle pounced on the opportunity and was crowned the 2019 Gold Coast Cup champion.

With two open division ranked events remaining in 2019, Castle and others will continue to solidify their claim and gain ground on leader Jarrod Langford and a 2019 Rankings title.

The NSW Open is the next stop on the Open Division circuit which will take place at Lidcombe on the 7th and 8th of September.

For all the results of this weekend’s Gold Coast Cup, head to www.tenpinresults.com.au