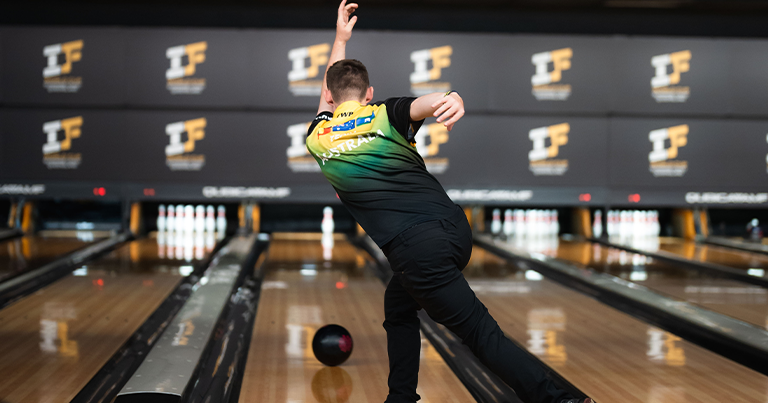 Recognition for 21-year-old NSW tenpin bowler Kallan Strong’s incredible year rolls on after adding yet another award to the growing collection after being named the Sportsperson of the year with a disability at the Central Coast Sports awards this week.

A total of eleven awards were presented at the popular annual event on Tuesday,  29 November, at the Mingara Recreation Club in Tumbi Umbi on NSW’s central coast.

“Speechless,” explained Kallan on his feeling when hearing his name called. “It is an absolute honour to win it”.

Born and raised on the NSW Central Coast, Kallan is a local bowler at Bateau Bay Tenpin Bowl. Kallan has an intellectual disability and has Attention-deficit/hyperactivity disorder (ADHD) and an autism spectrum disorder. Yet, nothing stops this young man from achieving goals in the sport he loves.

“I love the science behind the sport,” explained Kallan. “Meeting new people and travelling around the country”.

You would be hard-pressed to find a better year on the lanes in the country than what Kallan Strong has achieved in 2022.

Kallan was a key member of the NSW open team that completed a three-peat of the National Disability Championship (NDC) Open team challenge, sporting a new name of the Michael Cooke Memorial Shield, this year.

At the 2022 NDC, Kallan also won the open master’s competition, which helped solidify his selection in the inaugural Inclusion National Training Squad to be then chosen to represent his country at the 2022 Para Bowling World Cup.

A pioneer member of the first-ever Australian team to compete in such an event, Kallan claimed gold and became the world champion in the Intellectual Disability men’s individual event.

“It’s been my best year of bowling, and I have plenty more to come,” said Kallan.

Crediting ‘patience and the mental game’ as important elements of improvement in his game this year, Kallan has been busy attending award events this week.

Joining fellow finalist Sam Cooley, nominated for Athlete of the Year, Kallan was pinching himself at the experience.

“I feel like a small person in a very big world of athletes,” explained Kallan on how it felt to rub shoulders with some of sports most prominent stars. “To be able to represent the sport I love and show people that bowling is a sport is a big honour”.

Off the lanes, Kallan spends his time behind the lens as a photographer as his full-time job. Starting three years ago, Kallan captures a wide range of imagery from astronomy, commercial/corporate, events, landscapes, portraits, weddings, and sports, just to name a few.

“I love capturing memorable moments that people can share forever and ever,” explained Kallan.

Australia’s new World champion has had a stellar year on and off the lanes. His commitment to the sport he loves has been evident for a long period, and through patience and continued dedication, he is now reaping the well-deserved rewards.

How do you top a year like 2022 next year when setting out your goals?

“I just want to make the Australian team again and make people proud,” is the answer.

Tenpin Bowling Australia congratulates Kallan Strong on his success this year and looks forward to witnessing the developments in his promising future.