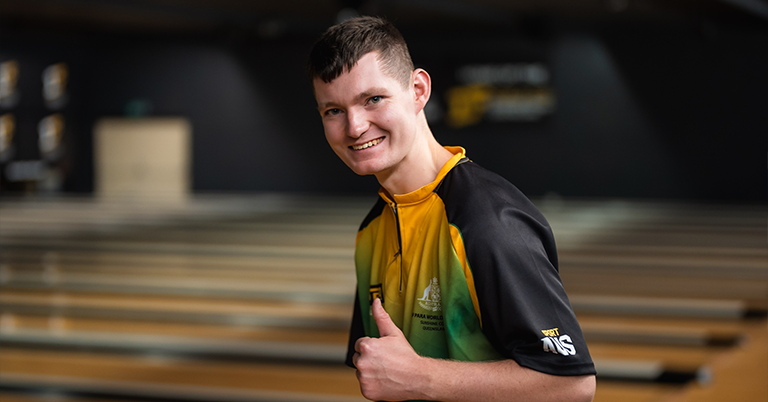 Kallan Strong has long been a force at domestic and national bowling tournaments around Australia. And now, Kallan has now proved he is the world’s best after a dominating performance at the Tenpin Para Bowling World Cup on the Sunshine Coast in Queensland.

The 21-year-old from Wadalba, New South Wales (NSW), lived out a dream this week. Kallan had the opportunity to represent Australia at an International event for the first time in his life. For the sport, it was also the first time the country had a team at an international event, allowing Kallan and his team to pave the way for future bowlers with a disability.

When debuting in such a new environment, you can be excused for having sub-par performance levels that you are used to due to nerves. However, for Kallan, the opposite happened as he controlled the lanes on his way to being crowned Australia’s new World Cup champion.

“It’s an amazing achievement, and I am very blessed to have the opportunity to bowl for the country, as it’s something we have never done,” explained Kallan.

In the opening ID singles event, Kallan took no time to showcase his world-class talent by averaging 195.3 over the twelve-game format with a high game of 247 in match eleven. The performance crowned the Bateau Bay Tenpin bowler with gold and a new title – World Champion.

“It was very tough out there with the oiling pattern, as we haven’t bowled on that before,” said Kallan. “Official practice was tricky, but I went back and drew up the gameplan, stood where I needed to be, and it was about repeating shots and closing frames”.

Kallan has bowled hundreds of bowling tournaments in his life, yet this one had a different vibe, and the oil pattern forced changes for equipment and his stance.

“It was a very professional setting where everyone took it very seriously, and everything had to be done on time,” explained Kallan.

“I had to change the surface on the ball as I needed it to reach the mid lane to get to the pins better. My stance also had to accommodate the break point down the lane, which was much further down than in any other tournament I have ever played on.

“I know those that have bowled overseas before would have seen a pattern like this, but for me, I may have seen something similar but never had the chance to bowl on something like this before,” added Kallan.

Strengthened with his biggest supporter by his side, with his mum Lee, Kallan was overwhelmed at the support he was receiving from back home, sharing all they could while he kept dominating the lanes.

“They are all really proud and impressed,” explained Kallan.

“I want to thank my sponsor QubicaAMF for all their support and the boss Glenn Rowland who has helped so much along the way.

“I also want to thank my personal coach Doug Elliott as this is just as much for him as well. Finally to Louise Eady and TBA for selecting me and giving me a chance to represent my country” added Kallan.

Kallan would go on to take two more wins.

In the ID Doubles event, a pairing with female singles champion Amanda Threlfall would see Kallan average another 196.3 over six games steering his team to gold. Then in the baker teams event, he would play a vital role in the male team edging out the females by 27 pins.

“To be able to place, you had to make sure you closed frames and left easy spares,” explained Kallan. “You struggled to get them all out if you didn’t leave the easy spares”.

A key founding member of Tenpin Bowling Australia’s (TBA) Inclusion National Training Squad (NTS), the 21-year-old from NSW would have been one of the very first names chosen by selectors for the inaugural Australian Intellectual Disability (ID) team to compete at the IBF Para Bowling World Cup.

After an incredible 2022 season that has seen Kallan awarded national titles and state sport awards nominations, it’s not hard to understand why.

This year Kallan was a key member of the NSW Open State team, who won their third straight open team state vs state event and the inaugural Michael Cooke Memorial Shield at the National Disability Championships in Victoria.

At the same championships, Kallan was crowned Open Masters champion after several close encounters in previous years. To top off the great year,  Kallan has also been named a finalist in the NSW Sport Awards for Young Athlete of the Year with a Disability.

Now a World champion, the long list of accolades continues, and Kallan hopes it’s only the beginning.

“Hopefully, I can make another Australian team and bowl overseas,” said Kallan. “It’s something I’ve always wanted to do, and my dream is to bowl in Vegas in the USA”.

With NTS Inclusion and a visible pathway to achieve extraordinary things on the lanes, the future looks bright, and the possibilities are endless for Kallan Strong.