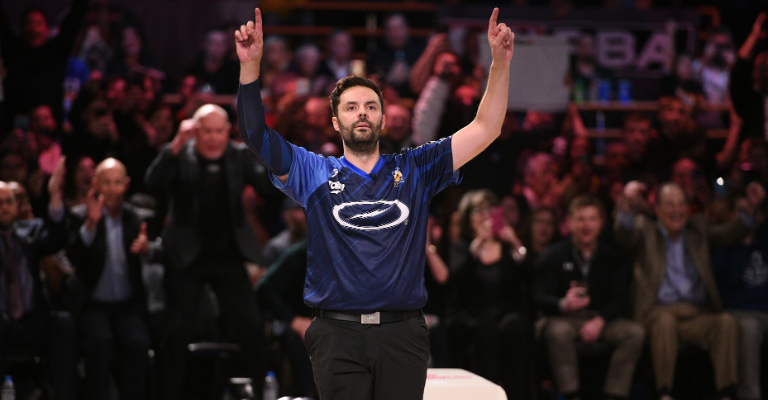 For a fifth time, Australia’s Jason Belmonte has been named the Chris Schenkel PBA Player of the Year.

Belmonte had another dominant season to earn Player of the Year honours and re-wrote the PBA record books, winning the PBA Tournament of Champions for a record-tying third time before winning the PBA World Championship to set the all-time record of 11 career PBA major titles. At just 36 years of age, today’s 2019 Player of the Year award lifts Belmonte into the realm of bowling icons – six-time winner Earl Anthony and Walter Ray Williams Jr. who won the honour seven times.

Accolades are exploding on social media platforms globally as the bowling community celebrates this momentous win which reaffirms Belmonte in the top ranks of the sport’s greatest heroes.

“One of those athletes that believes he can do anything … one of the great careers of the game,” enthused Tom Clark during this morning’s telecast. “It’s really special to be a witness to Jason’s achievements. His mental game is the strength of his game – all-time major winner of the PBA only happens when you have a focus unmatched in the history of the game”, he said.

A multitude of fans worldwide added their own perspective, summarised by a post on Belmonte’s popular Facebook site … “You earned it Jason – you are called the best there has ever been for a reason – you work your ass off and it shows with the most majors in PBA history and still many more to come”.

Belmonte responded to the deluge of congratulations with a heartfelt post on social media thanking PBA, his peers and media professionals who voted overwhelmingly for this title, his family who provide unwavering support, his sponsors and his legion of fans worldwide. “Lastly I want to thank my fans. Each and every one of you. The emails you send, the social media support, the crowds that come to watch live and the many handwritten letters sent to my home is overwhelming. Thank you for sharing your stories, for having my back and for screaming at your TV screens (or computer screens) hoping I strike on every shot.”

“I have the best fans in bowling and so I will continue to give my all to give you my best performances and continue to inspire and educate my fans on pursuing their dreams as a bowler,” he added.

The 2020 PBA Tour season kicks off on 15 January with the PBA Hall of Fame Classic in Arlington Texas, the first of the year’s exciting series of events that will include five majors in the space of just seven weeks in the first quarter of next year. An exuberant Belmonte is raring to go, telling fans, “… I can’t wait to do what I can to have a bigger and better 2020 PBA tour season”.