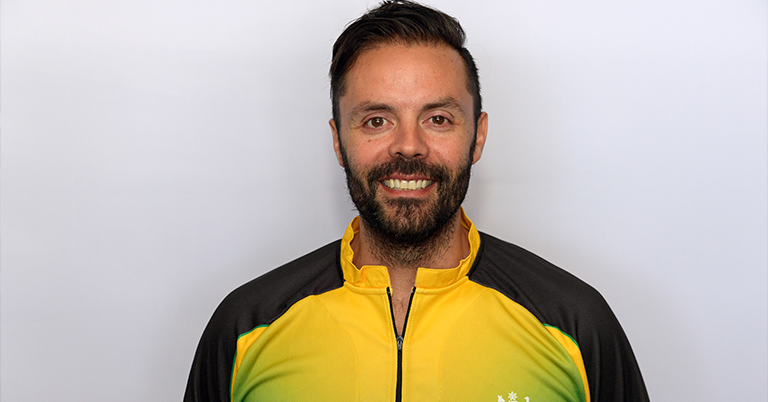 There is plenty of experience on Australia’s World Cup team this year, with athletes having represented their country up to thirteen times. In fact, Belmonte said he had lost count of the times he had represented Australia.

Even with years of experience backing him, Belmonte has been working hard in the lead-up to this year’s World Cup event, his first experience donning the green and gold in Australia.

“I’m really excited to wear the Aussie colours on home soil. “I’ve never had this opportunity before and I’m working hard on my personal game to be as sharp as possible, to give the other countries as much trouble as possible.”

Belmonte has full belief in an Australian team that is strong across the board, with a wide skill set and filled with “a good bunch of lads.”

“For me personally – and I’m sure my teammates will say the same – I would love to claim a gold medal in front of the Aussie fans, and we have the team to do that. It’s definitely a realistic goal, and with the hometown fans behind us, we just may grab it.”

This year’s World Cup event will be played for the first time utilising the Baker  format. Not many bowlers are very experienced with this format, but Belmonte believes all competitors will adjust quickly and produce some exciting bowling.

“I’m not entirely sure how it will play out, but I have a feeling it could produce a few upsets. “This head-to-head format will be something the crowd will really enjoy,” said Belmonte.

“At the end of the day, even with years of experience in the game, it’s always the same. “Knock over as many pins as possible with every delivery. “My thought process won’t change one bit for this format.”

Belmonte recently bowled in the Tenpin Premier League tournament (TPL) event on the Sunshine Coast, where competed for the first time at the AGL High-Performance Centre, the venue that is now hosting the IBF World Cup and Para Bowling World Cup.

“It’s a unique venue and having a team with experience there will help greatly,” he said.

“Some of the pairs of lanes are a little tricky, and hopefully our previous knowledge of that will give the team an advantage through the course of the World Cup.”

Since returning from competing on the PBA Tour in July, Belmonte has enjoyed being based in his hometown of Orange, New South Wales and spending some quality time with his family and personal support network.

“There is no place like home. “I have enjoyed everything my hometown of Orange gives to me.

“The majority of my time these past few months has been spent being a husband, a father, a brother, a son and a mate.  “While on the road, I miss the social aspect of these relationships so much and it’s been so good to spend time with all my family and friends.”

Jason Belmonte has just won his seventh PBA Player of the Year award, capping a remarkable year on the professional Tour, and tying with Walter Ray Williams Jr. for the most PoY awards in PBA history. To read more about this outstanding achievement, read the official announcement by clicking here