James Taafe Appointed a Member of the Order of Australia 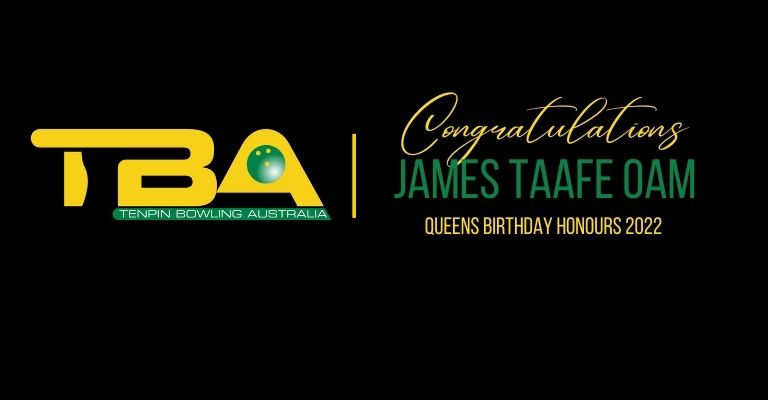 Tenpin Bowling Australia (TBA) is excited to congratulate James Taafe OAM as a recipient of the 2022 Queens Birthday Honours.

“It’s an honour to receive this acknowledgement. I am feeling somewhat humbled and grateful to have been involved with such an inclusive sport and with so many wonderful people,” said Taafe..

James Taafe has been appointed a Member of the Order of Australia (OAM) (General Division) for services to Swimming and Tenpin Bowling. He joins Jason Belmonte as a Tenpin Bowling recipient of an AM this year.

James has demonstrated outstanding service to the sport of Tenpin Bowling. He has been a Director of Tenpin Bowling Association of Victoria (TBAV) since 2005 and Chair of the TBAV Board since 2019. James also held office bearer roles at TBA, where he was Chair from 2010-2015 and also in 2017-18.  He has contributed to the leadership of the sport on a number of sub committees, inclusive of Governance and Remuneration, Finance, Risk and Audit and High Performance.  James’ professional role as Company Secretary and Bursar of Wesley College for 20 years ensured TBA was able to be in the position it is in today.

The Australian Honours and Awards system recognises the outstanding service and contributions of Australians, celebrating those inspiring people who make our nation what it is.

Chair of TBA Jerome Joseph acknowledged James’ continued contribution to the sport. “On behalf of the Tenpin Bowling community and the TBA Board, I congratulate Jamie for this award. It is undoubtedly deserved; Jamie’s contribution to the sport is second to none. We, as an organisation, are very proud of his achievements and thank Jamie for his continued service to Tenpin Bowling in Victoria and across Australia,” commented Joseph.