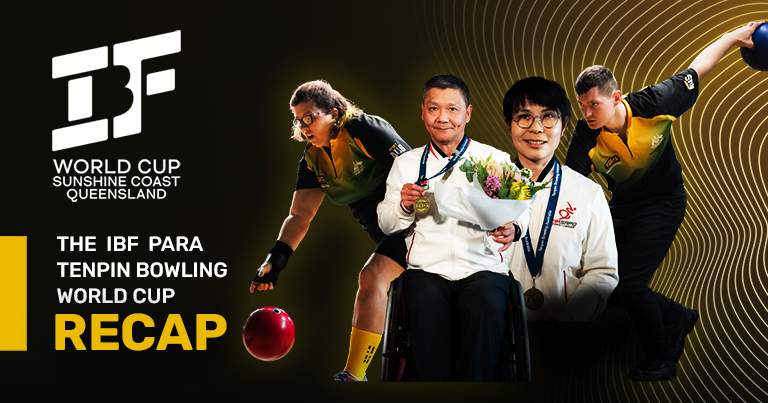 Australia, Hong Kong, and Singapore entered into the various classification events for the Tenpin World Cup 2022.

“It was a great event that saw some high scores bowled by some very talented athletes,” said TBA High Performance Manager Mike Griffith. “The countries who attended competed in great spirit and enjoyed the opportunity to bowl on the World stage here at the Sunshine Coast”.

The event commenced with the Intellectual Disability Singles with 8 competitors from Australia.

Following his finalist nomination in the NSW Sport Awards, Kallan Strong secured his World Championship with a dominating display in his 12-game singles event.

The Bateau Bay export from New South Wales bowled a total of 2,344 over his twelve games, an average of 195.3 with an event high score of 247 in his fifth game.

Rounding out the podium for the male division was Queensland duo Matthew Hurst and Tyler Allen. Hurst claimed the silver medal with a total of 2,117, 227 pins behind Kallan Strong. Bronze medallist Tyler Allen finishing on 2,110 narrowly edging teammate Adam Sutherland for the podium.

In the female division, Victorian Amanda Threlfall was crowned World Cup champion. Bowling a total of 2,044 over the twelve games, the Oz Tenpin Shepparton bowler averaged 170.3 and a game high of 201 in her second to take the title.

New South Wales bowler Dianne Demello finished in second spot claiming the silver finishing on a total of 1,937 ahead of Queenslander Karnie Taylor who rounded out the podium finishing on 1,911 pins just ahead of fellow Queenslander Courtney Bucknell in fourth place. 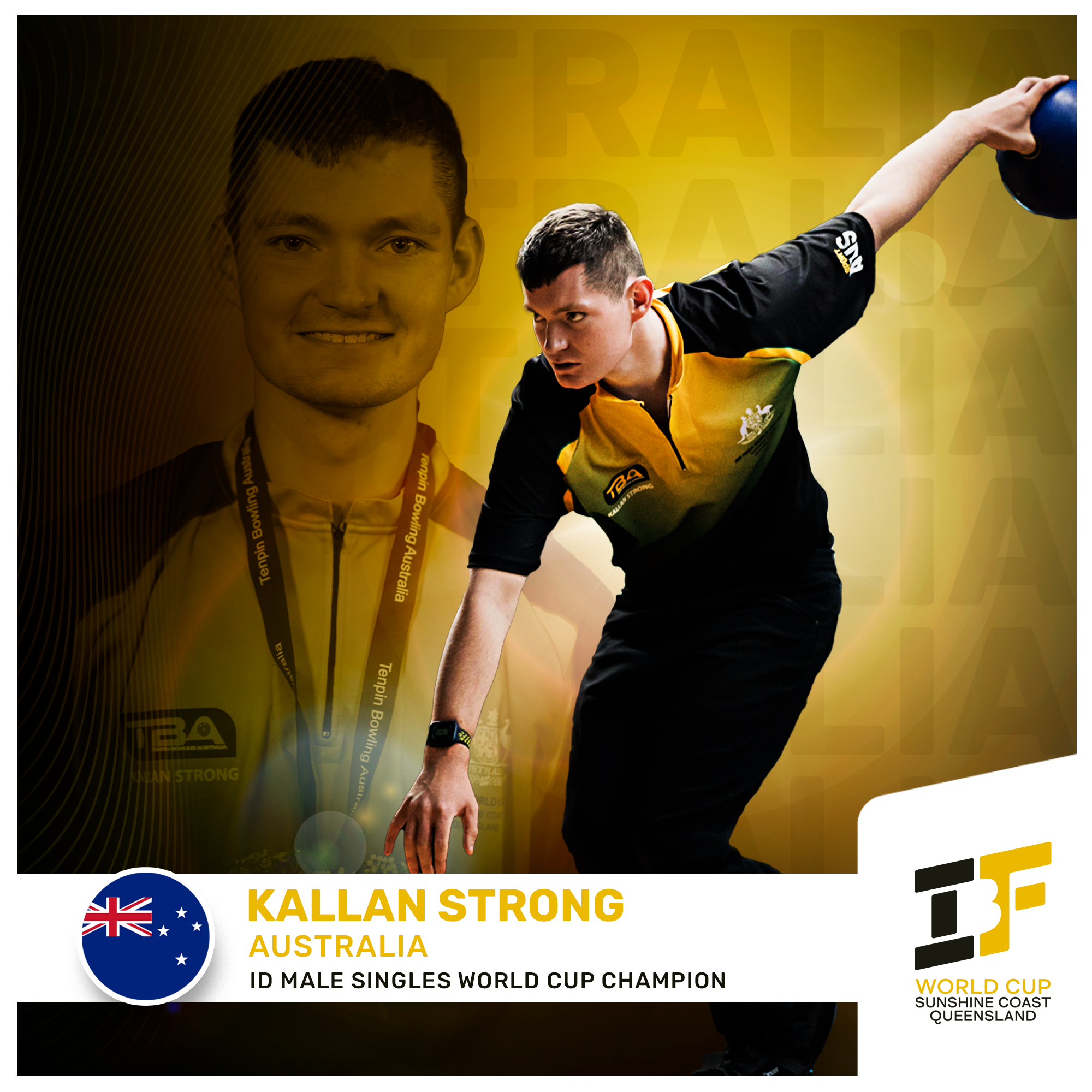 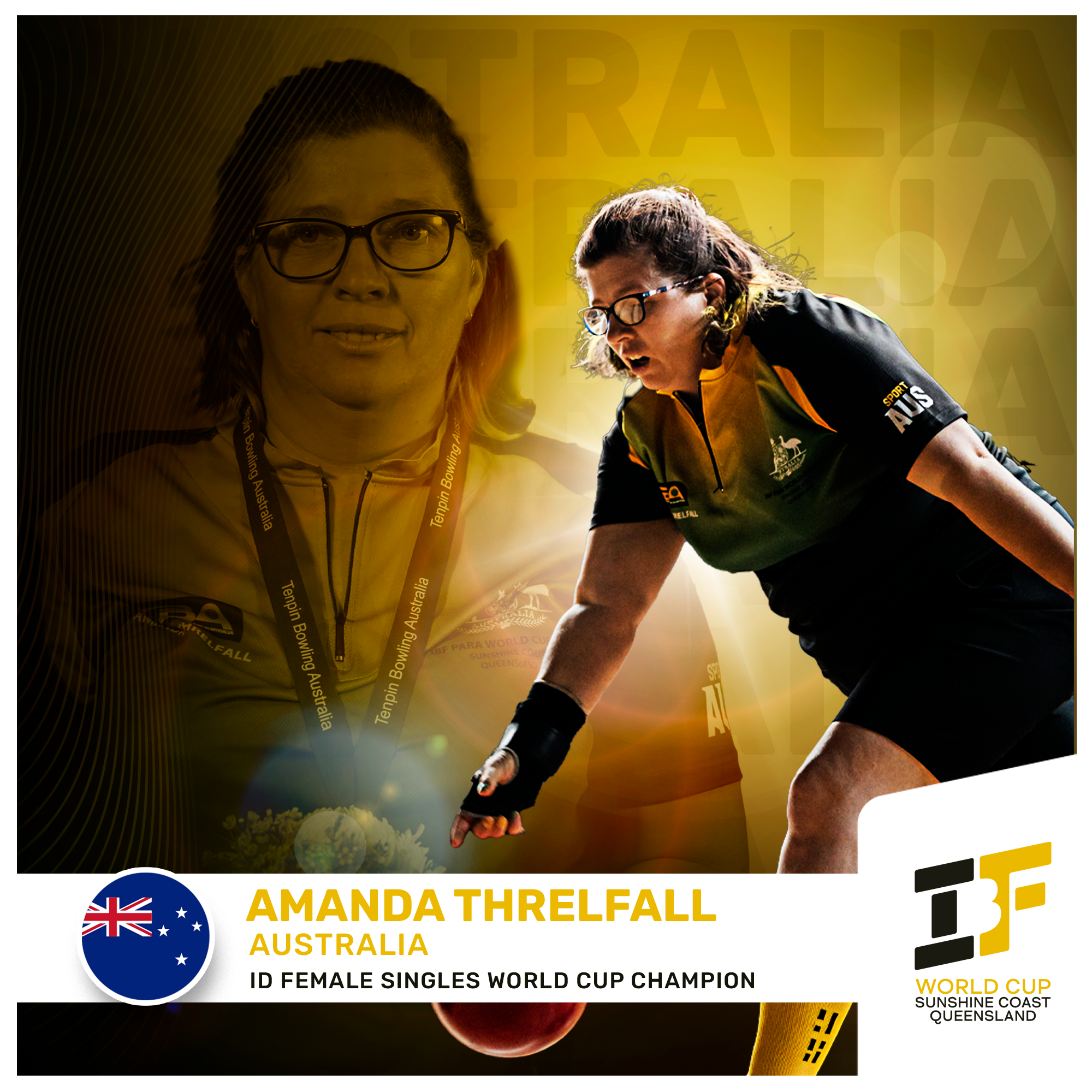 The Vision division got underway on day three with Hong Kong and Singapore entering the fold.

Teams would first compete in the singles event which saw bowlers complete 12 games over two rounds on two days.

In the mail division, Hong Kong’s Hoi Tung Cheung claimed the gold medal after finishing on 2,097. Cheung averaged 174.8 over the twelve games with an even thigh of 217 in the fourth game.

Hussain Mohd Ismail from Singapore finished with the silver medal on 1,999 and Tat Chung Chan from Hong Kong finished in third place on 1,972 to claim bronze.

For the female division two Hong Kong bowlers contested the title with Wing Kum Chu claiming gold with 1,926 over twelve games, edging her country counterpart Wing Shan Yuen who settled for silver on 1,865. 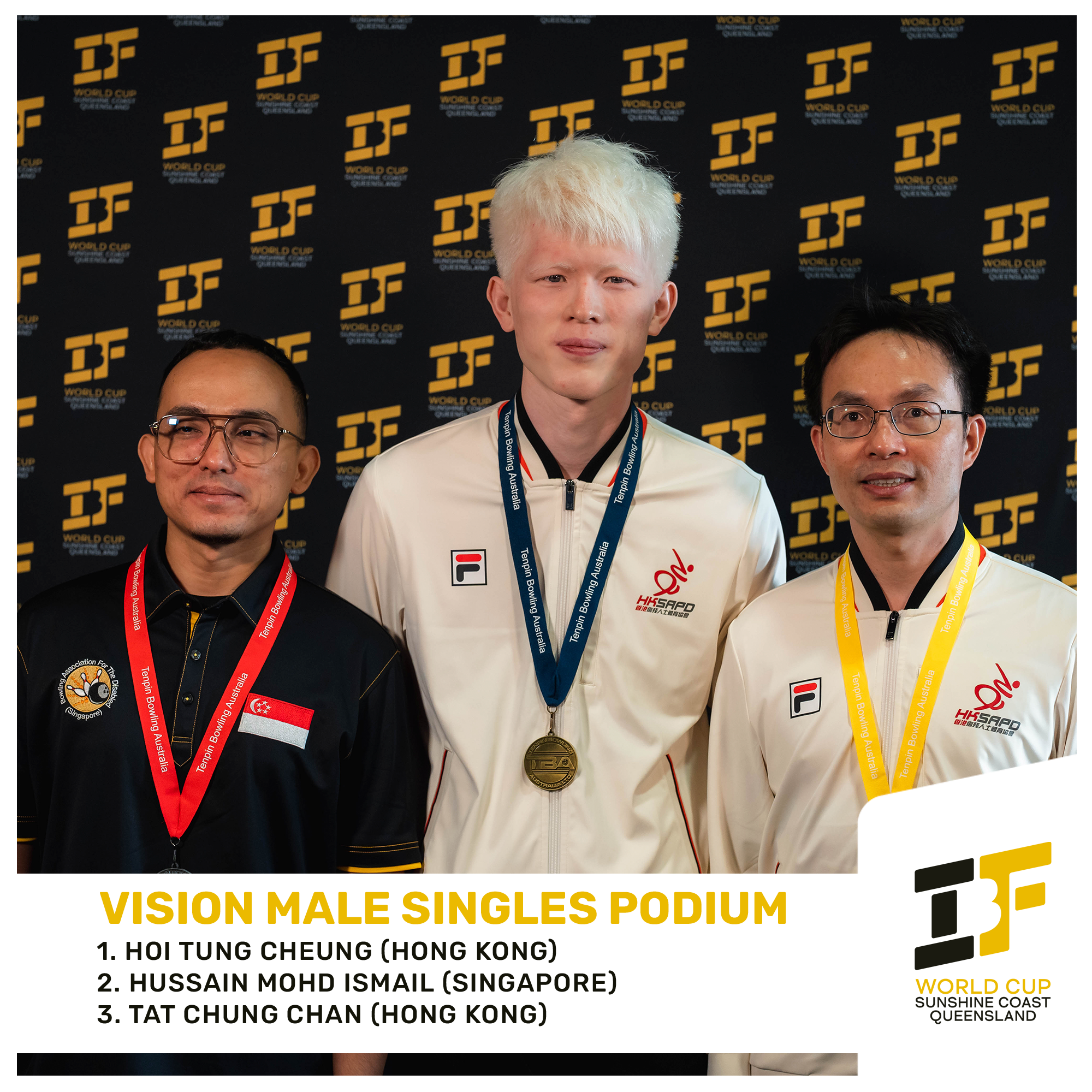 The Wheelchair singles classification saw bowlers from Hong Kong contest the titles on the last day of play of the IBF Para Bowling World Cup.

This mixed division was contested with three athletes vying for medals. Kwok Cheung Wong claimed gold with a 1,833 over his twelve games and an event high of 192 in his seventh game.

Mei Lan Wong was the sole female competitor and finished on 1,456 over her 12 games with a 145 high game in the fourth match. The teams undertook a number of friendly matches across the format – including the ID Doubles and Teams Events, along with a Mixed All Abilities event.

The Australian team returned on day two for the doubles event. The athletes would compete in a mixed doubles format completing six games.

Taking out the gold medal was the two single World cup champions in Kallan Strong and Amanda Threlfall.

Bowling three 200 + games in his block, Kallan Strong continued his dominance on the lanes averaging 196.3 over the six games. The duo would finish on a total of 2,125 with a combined average of 177. 1 to claim the gold medal.

After missing out on medals in the singles event, Tasmanian Adam Sutherland and Queenslander Courtney Bucknell claimed the silver medal finishing on 1,995 pins and a combined average of 166.5.

The pairing of Karnie Taylor and Tyle Allen finished in third spot on 1,961 total to claim the bronze medal.

The Australia teams returned for the third day of competition with the males taking on the females in a six game baker format teams’ event.

In a tight contest, the males eventually came on top winning four of the six games and finishing on a total of 1,016 with an event high game of 192 in the first match.

The female team won two of the six matches and lost the second match by one pin to finish on a total of 989 and an event high game of 194 in the fifth match.