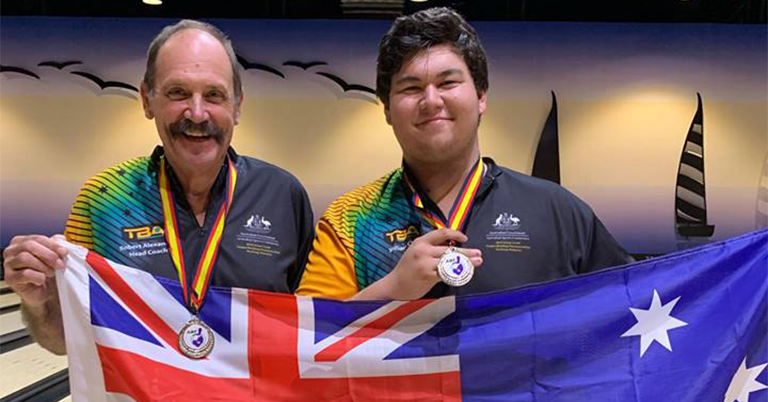 Robert Alexander, an Aussie Rules coach from Adelaide, never imagined he would one day be the Head Coach of the Australian Tenpin Bowling Team, leading the team to a home World Cup at Suncity in November 2022.

When asked how he transitioned from being a level 3 Aussie Rules coach to coaching Tenpin Bowling, he credits his son.

“When I was younger, I did bowling but not competitively. I was originally an Aussie Rules fan, but my son went to a come-and-try bowling event in the late 1990s and really enjoyed it,” Alexander said.

“That led to him joining the Cross Road Crushes, and at his training sessions, I’d see 30 kids being trained by one coach, so I offered to help.”

Alexander went on to complete the Tenpin Bowling Australia high-performance coaching courses after realising he had something to offer from his Aussie Rules coaching days. In 2004, Alexander found himself as a qualified coach and leading South Australia as the state head coach. This led to several roles as Assistant Coach for Team Australia, then taking on the role of Head Coach of the National Training Squad (NTS).

Throughout 25 years of coaching experience, Alexander has developed a coaching strategy based on communication, trust, and creating a symbiotic relationship with his athletes.

“When it comes to a coach and their athletes, you must understand that it is always a two-way street,” he said

“I may make a suggestion, and they may accept it or reject it; I am open to suggestions. I just want them to have fun and improve as much as they can.”

When looking forward to the upcoming World Cup, set to get underway at the country’s new National High Performance and Community Centre at Suncity Tenpin Bowl on the Sunshine Coast from 11-23 November 2022, Alexander is focused on providing a supportive environment where the athletes feel equipped to perform at their best.

“We are making sure the athletes prepare the best they can. Our bowlers are from all over Australia and so we can’t train together as much as we like.

“As Head Coach, I try my best to guide them, but their personal coaches have the most impact on them and put in the hard work,” he said.

This year’s Australian World Cup Team includes major international names such as six-time PBA Player of the Year Jason Belmonte, and defending World Cup champion Bec Whiting. However, when asked about the team’s goal for this year’s World Cup, Alexander said that while medals are always a bonus, his focus is for the team to put down performances they will be proud of.

“It would be great to win some medals but I won’t be disappointed if we don’t. I just want them to bowl well and perform to the best of their ability.

“There are a lot of good teams coming over and filled with star bowlers, it’s about how well we gel and with the new format it’s now more important than ever that everyone helps everyone and we work as a team.”

This year’s World Cup will see our Aussie team play a relatively new format known as the ‘Baker’format which they don’t play here in Australia. The Baker format is where a single line (game) of bowling is shared by an entire team.

“The Baker format is an interesting format as we don’t play it here in Australia, so other countries will definitely have an advantage over us. In saying that we have two exceptional bowlers that have played in this format and so they can pass on their knowledge to the rest of the team.”