Hard Work Pays off for Perry 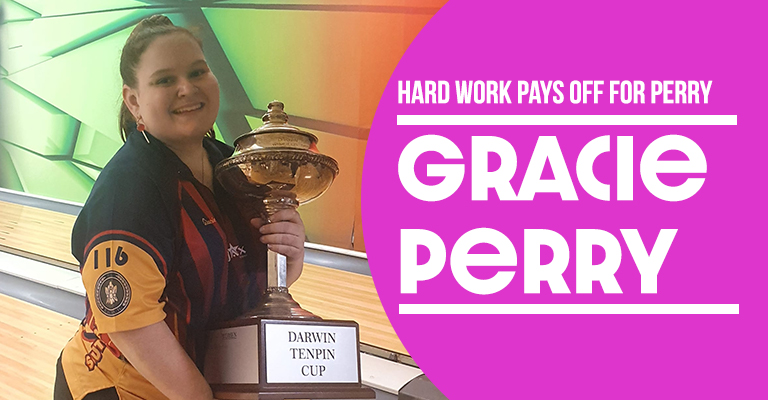 The young 21-year-old from South Australia claimed her first national title by winning the Darwin Tenpin Cup at Planet Tenpin over the weekend.

The Women’s division ranked event calendar once again opened in the top end over the weekend after becoming the last event for them in 2020 before COVID-19 struck down the year. Hosting some of the best bowlers in the country and a current defending World Cup champion, it was young Gracie that would reign supreme and claim her first national title.

“The feeling of winning my first nationally ranked event is like nothing I have ever experienced” explained Gracie. “Once I had realised, I had won there was an overwhelming feeling of shock and disbelief but also a feeling of relief as I felt as though my training and hard work has finally started to pay off”.

Hard work has been connected to Gracie’s name in the bowling community for some time.

Bowling since she was six years old, Gracie like so many other bowlers would be introduced to the sport through family.

“I got into bowling because both my brothers go into it, I got bored watching, and I wanted to join in” explained Gracie.

Bowling her first Junior Nationals at eight years old, Gracie began rolling-off for the President’s Shield team from 10 years old. “It took me five years before I made my first Shield team after getting drafted to the Northern Territory”.

Gracie’s resume now includes 3 President’s Shield appearances, 5 Youth Team Challenges and 2 Rachuig’s, and being selected in the 2020 team that missed the chance to occur last year. The performances at state level caught Australian selectors eyes as Gracie was involved in the Youth National Training Squad (NTS) for two years before now having a spot in the Women’s NTS.

Capturing her first national title, Gracie was quick to thank those always in her support corner.

“The first people I contacted to tell were my coaches Bob Alexander and Shane Bernhardt as well as my ball driller, Al Przybysz” said Gracie.

Success in this sport is not an overnight process. It comes from years of hard work and attempts along the TBA pathway. That hard work continues even when one is performing on the stages Gracie is.

“I bowl two leagues a week, I train once a week with Bob Alexander, our smaller state tournaments run on Sunday morning, so I bowl 3-4 times a week” explained Gracie.

Not only does the bowler from ZONE Bowling Cross Road bowl, but she spends her spare time coaching the sport she loves. Gracie gets a lot from by not only helping others but also expanding her knowledge for her own game.

“I currently have a bronze coaching accreditation and have been fortunate enough to be an assistant coach for a President’s Shield team, an experience I will never forget,” said Gracie. “I am currently working towards gaining my silver accreditation to further my coaching career as well as develop my own bowling”.

Like so many Bronze accredited coaches, Gracie uses her coaching accreditation to teach the next stars in the Bowl Patrol program at ZONE BOWLING Woodville.

“I believe this program is exceptional and wish there was something similar to Bowl Patrol when I started Bowling” stated Gracie. “It’s amazing to coach and encourage the next generation of young bowlers”.

To allow a sport to consume a large majority of her time, the love of the game is a strong one for Gracie.

“I love bowling because it is a sport for everyone! It is so inclusive as evident through the Bowl Patrol and Bowl Abilities programs. I have a small physical disability in my right shoulder that would prevent me from doing other sports but not bowling” explained Gracie. “I also enjoy the fact that there are so many layers to bowling. You can come into bowl a couple of games for fun, bowl a league, or bowl competition. There is something for everyone when it comes to bowling”.

Gracie studies a Bachelor of Business (Management) and a Bachelor of International Relations and Political Science at Flinder’s University when not bowling.

“Flinder’s is very accommodating of my sport commitments and have an Elite Athlete Program that allows me to seek assistance with my studies so I can maintain both my study and my bowling. I also have a part-time job in retail”.

As we know, the 2020 season did not provide much joy for tournament bowling across the country. South Australia did not endure a significant impact from COVID like some other states may have, but there were periods of extended lockdowns that lasted months that didn’t allow Gracie to enjoy the sport she loves. Gracie would still find the silver lining of the situation.

“My NTS coach last year Geoff Bowness kept me on track asking us to send in monthly calendars about our bowling and activity as well as getting us to contribute to discussion once a fortnight” explained Gracie. “This helped me keep interested in bowling and continue to expand my knowledge even when I couldn’t be on the lanes. I think taking time off made me realise just how much I love bowling and how much of my life I dedicate to it, I suddenly had all this free time and no idea what to do with it”.

The return to tournaments is something Gracie has craved after what transpired in 2020.

The new year has started well for the South Australian, and she only intends to add to it as it progresses.

“I want to keep striving towards my silver coaching accreditation, continue to expand my knowledge, and get to as many nationally ranked events as possible”.

Keep an eye out for the young South Australian as the ranked event season continues.