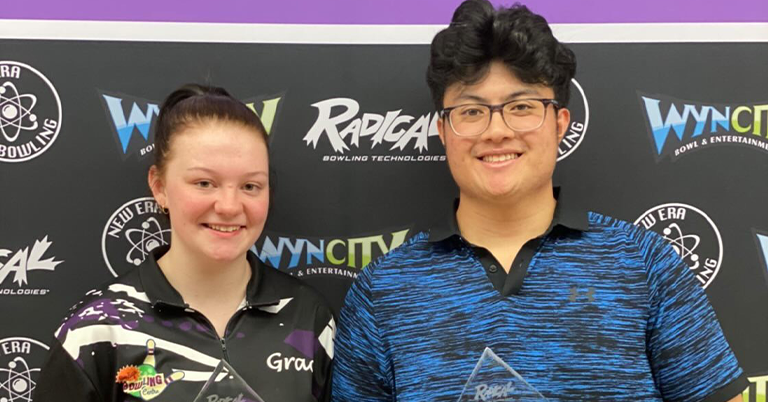 After a COVID interrupted 2021, which saw only the Sydney Youth Cup in May and the TBA21 Masters in July run – 217 days ago, a national youth tournament was back on the lanes.

Bernie Grueso Jnr made history at the Wyncity Keon Park Bowl over the weekend by becoming the first bowler to win three Werribee Youth Cup titles.

In almost two decades of the tournament running, several bowlers had won two titles including Sam Cooley’s back-to-back victories in 2010 and 2011 as well as Glen Loader, Emily Robertson, David Porto, and Janet Hunt.

Winning his first WYC in 2017 at the age of 15, before taking the title again in 2020, Bernie is fast becoming one of the best youth bowlers in the country.

The two-handed right-hander from Wyncity Point Cook put on a show leading the field throughout all stages. Averaging 213.4 over the first ten games of qualifying, Bernie would continue his hot form in stage two, maintaining the top spot by 157 pins from nearest challenger Nixon Chan leading into match play.

Never one to take a backward step, the NTS 21 team member upped his game in match play averaging an impressive 233.6 over his five games. The performance warranted bonus pins and victories in three of his five matches on his way to the title.

“This is probably the most rewarding win in my career so far,” explained Bernie.

“This was the most challenging lane condition I have ever faced in a ranked event, and I absolutely loved it! It wasn’t a carry contest, and it wasn’t an area contest. Shot making was at a premium with errant shots in terms of placement, release and speed being punished and exposed.

“I loved the fact that this event was about lane play strategy, a puzzle-solving competition, and a shot makers contest. I really enjoyed the challenge,” added Bernie.

The recent victory is yet another achievement in the growing collection for Bernie. The results driven by hard work and a will to be the best he can be.

“I bowl anywhere from 5-9 times a week depending on how busy I am,” said Bernie.

“I have been working really hard on my versatility regarding my speed control and my release.

“I wouldn’t say I was one dimensional, but I did feel like too often I was locked out of an event because I couldn’t match up. I was extremely grateful to finally be able to use a lot of the things I work on in practice in just one event” added Bernie.

It was a Victorian whitewash as fellow Victorian Grace Fahy from Bendigo performed superbly at the Werribee Youth Cup in a fierce battle with South Australian rising star Emily Hart.

A silver medallist at the team’s event and a seventh overall placing in the All Events at the 2018 Asian Schools Championships, proves Grace has all the qualities needed to compete with the very best at all times.

After taking some time away from the national team commitments, Grace is now ready to prove that she belongs with the top youth bowlers in the country and hopes to position herself to wear the green and gold once again.

“I would love to represent the country again; it was such an unreal experience,” said Grace.

On the weekend Grace began her return to the lanes in style averaging 185.4 in the first ten qualifying games and finishing just three pins behind top qualifier Emily Hart leading into the match play finals.

With 30 bonus pins on offer in all five of the match play games, Fahy grabbed the opportunity to prove once again she is one of the very best bowlers in the youth division.

In the first of five games in the match play finals, Fahy was drawn to bowl against her closest rival in Emily Hart. After bowling only two 200 + games on day one, the bright lights of match play bowling saw Fahy rise above her opponent and post a 206 score to defeat Hart in match one.

The result set the tone for an outstanding match play phase that saw the girl from Bendigo claim victory in all five matches including a super impressive 269 in the last game. The win reminded everyone including herself that she has what it takes to be the best.

“I feel like I’m going to cry again. I am just so happy,” explained Grace.

“I haven’t won since 2019 so I was feeling like I may have been past my prime because all the new kids are so amazing.

“Since COVID, it’s been really tough in terms of preparations and getting back into the bowl has been a struggle within itself.

“I want to thank the Bendigo Bowl for sponsoring me – I wouldn’t be here without them and congratulations to everyone else who bowled this weekend,” added Grace.

The next Youth division ranked event is the Sydney Youth Cup at Tenpin City. Entry forms for the event should be released shortly, so keep an eye on the ranked event page for any updates.