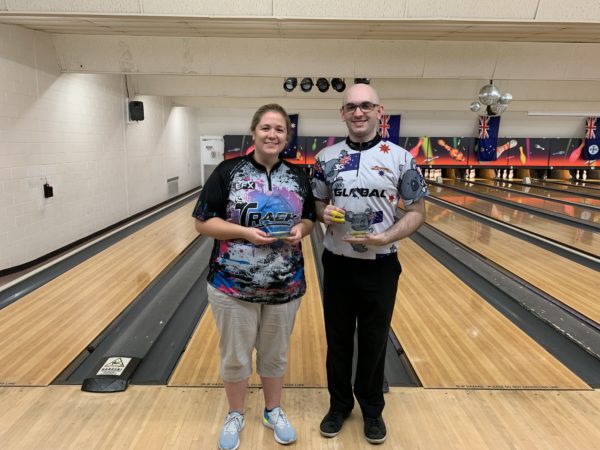 Sam Cooley has earnt the right to defend his World Cup title after winning the weekends Australian Open at ZONE BOWLING Keon Park. Cooley will again be joined by Bec Whiting in Palembang, Indonesia in November, after the three-time World Cup representative finished as the top scratch bowler at the Vic150.

In Sunday’s matchplay finals, Cooley went on a run to finish on top and earn the right to defend his 2018 World Cup title which he won after defeating Kyle Troup in the final in Las Vegas last year. With 11 matches standing in his way Cooley won the opening three. Then without winning the fourth, fifth and sixth matches the Shellharbour bowler won the seventh and picked up bonus pins in the tenth and eleventh to finish a huge 306 pins ahead of second placed and 2017 winner, Jarrod Langford (7547) with James Bowles (7458) rounding out the podium in third.

In qualifying, Ryan Burton led the field after the first and second block of qualifying. The Chirnside Park bowler averaged 233 which included a 300 in game four of the opening block, to lead Sam Cooley who sat in second by 52 pins heading into stage one of the finals.

With a further six games to bowl before the match play rounds, Cooley jumped into the lead with Bowles in second and Jayden Panella in third.

In the Vic150, Bec Whiting was back to defend her crown after being the best scratch bowler in the event for the past three years. When qualifying got underway Whiting fended off a strong field to average 228 over the sixteen games to sit in second and 17 pins behind leader Bree MacPherson.

After finishing 17th at last year’s World Cup, Whiting was determined to earn her place at the prestigious tournament and in the matchplay rounds she opened with games of 248 and 257. With not just prize money up for grabs, Whiting found her line to finish as the leading scratch bowler by 148 pins and book her spot at the 2019 World Cup with Macpherson finishing (5980) in second place and Dena Buxton (5960) in third.

With the top 12 graded and scratch bowler pairing up to determine the winners of the Vic150, Whiting continued her solid form with partner Nola Downie to win the tournament, after winning the event last year with Debbie Naughten.

The 55th QubicaAMF Bowling World Cup will be held in Palembang, Indonesia from November 16 to 24. For more information on the tournament click here.