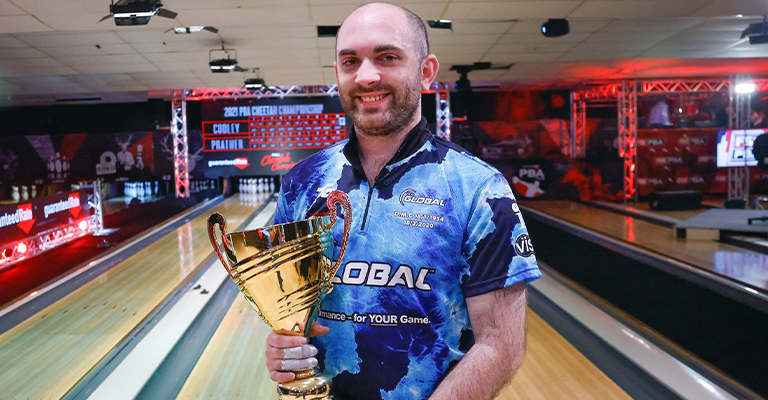 Heading into the final frames of the match, Cooley was overcome with emotion. Not only from realising he just won his first PBA career title but thinking of his mother, Donna, who passed away last year from a battle with cancer. Sam would dedicate the victory to his mum in a touching moment as he reached for the trophy.

“She’s why I’m here”, Sam explained to Lucas Wiseman from FloBowling. “She sacrificed a lot – financially, time, effort, she was always there for me at a tournament, she would still travel with me a lot of the times when I went overseas, she gave me advice, even a kick up the butt if I needed it. Having one of my biggest supporters gone, it was tough”.

The bowler from Shellharbour, New South Wales, entered the round of 16 of the PBA Cheetah Championship as the eighth seed to battle it out in a best-of-five match play format. On his way to the eliminator finals, Cooley would defeat number 9 seed Brad Miller and number 2 seed Chris Via.

The match play victories enabled Cooley to settle on a strategy for the eliminator finals.

“I went with what got me here through match play,” Cooley said, “throwing reactive at the gutter, which is one of my strengths. I got through the first match, and my reaction got better from there”.

On route to his first career title, Cooley was matched up against three superstars of the PBA – Anthony Simonsen, Marshall Kent, and Kris Prather. The eliminator finals saw all four players bowling a single game with the lowest score eliminated.

In match one, Cooley posted the third-highest score, eliminating Anthony Simonsen. Cooley rolled 258 in the next game while Prather shot 236, knocking out Marshall Kent.

Like all TV show finals in the championship match, commercial breaks throw another challenging element into the mix. After building a lead over Prather, Cooley had to stop himself from thinking too far ahead.

“There were a few moments during the break when I had thoughts that this was actually going to happen,” said Cooley. “I had to tell myself to stop. That’s what kills you, overthinking or thinking it’s already over when it’s only halfway. I treated each frame as important as anything else. It all worked out”.

Cooley rolled seven strikes in the championship match to defeat Prather, who recently won his fourth career title in the PBA Roth/Holman Doubles Championship. After making his debut on the PBA Tour in 2015, Sam chased the dream for the last six years.

Now he has a title; he hopes there is plenty more to come.

“I’m glad today worked out,” said Cooley. “I’ll have a lot more confidence moving forward. Now that I know I can do it, hopefully, it’ll happen more regularly”.

Tenpin Bowling Australia would like to congratulate Sam on his incredible performance and victory. We know how hard he has worked in reaching these fantastic heights in the sport. We believe it’s the start of many more to come.

Credit to PBA and FloBowling for the images and quotes.