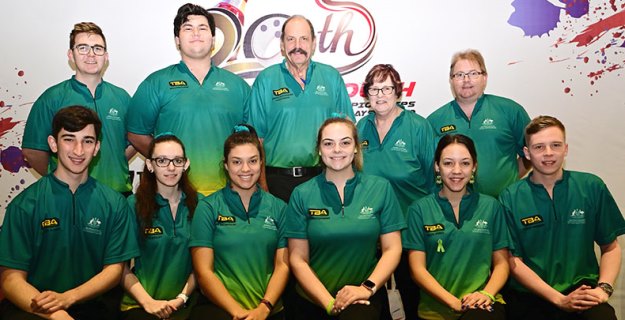 Australia’s youth team have finished their Asian Youth Championships campaign in Malaysia with Will Clark leading the team to 6th on the overall medal tally after claiming silver in the singles event and finishing fourth in the Masters.

On the opening day of competition, Clark got Australia’s campaign underway at the Megalanes centre in Kuching after the Newcastle bowler stormed home in the singles event averaging 222 to finish second overall and 15 pins behind, winner Merwin Tan from the Philippines.

After accepting his medal on the podium Clark who represented Australia for the third time said the silver medal was “special” and the result set him up for the rest of the tournament.

“I knew I was in for a chance,” Will Clark

“I knew that if I threw plus 120 in the last two games I knew I was in for a chance. Shooting the 280 with everyone behind me (in the final game) was great to get into the top 3 and then finish 2nd,” Will Clark said.

“The ceremony was great receiving the medal with the Australian flag on the back was something special,” he continued.

On day three, it was Callum Borck who led the boy’s team to 4th place, averaging 211 and see them fall 197 pins out of the medals. The girl’s team was led by Ivy Dickinson, who averaged 187 to finish in 5th place.

After finishing 8th in the All Events, Clark joined Jones (11th) and Dickinson (16th) in the Masters event which would conclude the tournament. Again it was Clark who led the remaining Aussie’s in the first block on the medium oil. After winning five of the 8 matches in the opening block Clark sat in fourth on the leader board with a further 8 matches on the long oil. In the second block Clark won three matches out of the 8 to finish the event in 4th and 42 pins outside of a medal. For the girls it was Jones who finished the best in 11th with Dickinson in 16th.

The Philippines and Macau picked up the other gold medals at the Championship in the boys and girls singles on the opening day of the championship.

A total of 40 boys and 36 girls from ten countries participated in the week long Championships.

For all the final standings, visit the abf-online website here.