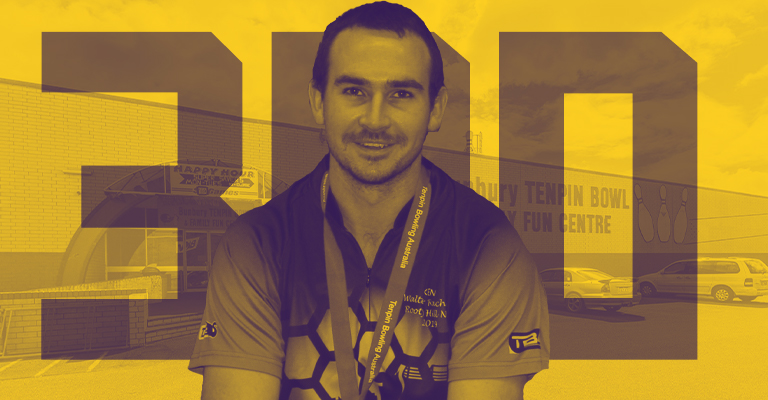 2020 has largely been a year that many wish they could forget. In Bunbury, Western Australia, a league bowler will remember it fondly after posting the centres first perfect game of 300.

A population of around 31,000, and 180kms south from Perth, Bunbury is a vibrant seaside port city known as the City of Three Waters. As the status quo for many regional areas of Australia, the way to explain life is that it’s a ‘laid-back and friendly’ town. A city that boasts picturesque waterways that play home to the popular and friendly bottlenose dolphins.

A location that has many things to see and do. One of those things is bowling. The Bunbury Tenpin Bowl & Fun Centre – a centre that until 2020, had never seen a perfect game occur.

Opening in 1982, the bowl has always been a locally owned and operated business. In 1999, Linda Mill’s began work at her local bowling centre. Two years later, Linda would take over the business and remains proprietor to this day.

Like many industry owners, Linda has a history in the sport that spans many decades.

With the responsibility of running a regional centre in the South West of Perth, you could be excused for not getting too involved with the sport side of tenpin bowling.  Yet, Linda has always remained a big supporter of the sport and Tenpin Bowling Australia.

A week in the Bunbury centre sees many examples of our great sport taking place.  A total of 7 leagues take place throughout the week. Approximately 100 registered league bowlers take to the lanes in a mixture of offerings with singles, doubles and trio leagues to choose from.

A group of people with a disability in the Bunbury Bandits hit the lanes on Saturday afternoon while Bunbury is also a great supporter of the national junior participation program Bowl Patrol with their sessions on Tuesday afternoon.

An increased involvement from TBA at a State and National level by offering high level coaching courses and support to the regional centre has seen plenty happening at Bunbury Tenpin.

The 5th March 2020 – like all Thursday nights, the Scratch Singles league were scheduled to take over the bowl.  Unlike other weeks, history would be made in the 38-year old centre where it would see more pins fall in a single game than ever before.

24-year-old Bunbury local Ken Temme would be the first to achieve an accredited perfect game of 300 in his second of three games for the league night.

“I felt a sense of fulfillment that I had finally bowled a perfect game after so many years of trying” explained Temme. “I’m so happy that my first 300 was in my hometown and home centre”.

Bowling since he was five years old, Temme has been a registered bowler since the early 2000’s. Always at Bunbury, always in his hometown and always at his home centre – Bunbury Tenpin, where his mum works- Linda Mills.

“I was very happy for Ken to get his 300 especially in league!” said Mills. “I wasn’t here but I’ve watched him bowl a 300 in practice before, so I was not surprised- I knew he would be the first to do it!”.

Stepping up for the first game, Temme would open his nights league play with a 9 spare, strike and two open frames of 9 in the third and fourth frame. It all seemed like a usual night of league until Ken would go on a streak like never before.

Temme would close out game one from frame five with a string of strikes to end on an impressive opening game score of 237.

A Motiv Supra would serve as his ball of choice to continue his streak of strikes.

“I never thought it was a possibility until I got to the 10th frame and threw the first 2 strikes, it was only at that moment I knew I had a chance at a perfect game” admitted Temme.  Twelve strikes in a row. The perfect game and a score of 300 in game two.

Running hot, Temme would open game three with strikes in the first three frames before sparing in the fourth. A third game score of 223 and an impressive three game series of 760.

“After all 3 games were bowled I realised I had 23 consecutive strikes from the 5th frame in game 1 to the 3rd frame in game 3” said a surprised Temme.

The 300 would become the first recognised accredited perfect game Bunbury Tenpin has witnessed. Why in 38 years has such an achievement alluded Bunbury Tenpin?

“I think it has taken this long because we do not block the lanes with oil to get high scores that a lot of centres do. We only oil our lanes to protect them from the bowling balls” explained Linda Mills.

Ken has quickly become a bowler on the rise.

2019 would see Temme represent his state of Western Australia for the first time at a National Championships. Finishing in 24th place in the Australian Masters event, Temme would also bowl 18 games in the Walter Rachuig Trophy Tournament. A vital part in the silver winning men’s team, Ken would narrowly miss being named an All-Star after finishing sixth in the individual standings. He would finish his first nationals by receiving the Chairman’s Award which was a ‘surprise and huge honour’.

His obvious connection at Bunbury Tenpin has helped Ken realise the opportunities that exist to develop his game. Largely crediting his recent improvement in his game to two things that centre around the high-level coaching courses that TBA has ran recently.

The first is his coach Rick Laherty and his recent upgrade in coaching credentials to silver. The second being Ken’s decision to become a bronze coach himself. Both opportunities that were made only possible after completing them at a recent offering of the accredited coaching courses in WA.

“Rick has put a lot of time and effort into helping me better my game, keeping focused and reducing mental pressure” explained Temme. “The bronze coaching course has helped me better understand the science of bowling”.

Now, like his mum, Ken has decided to give back to the sport he loves by becoming a Lane Ranger for his centres Bowl Patrol programs.

“The program is great!” said Ken. “It’s a great opportunity for children to get into bowling and learn more about it. It teaches kids new skills and techniques in a fun and exciting way. Seeing the kids do well and progress further through the levels – seeing their smiling faces when they receive a coloured wrist band to make their level of achievement – that’s what it’s all about!”.

Above the customer service desk at Bunbury lives a chalkboard with lots of writing on it. Its titled – “Local Legends – bowl a 180 game or more and receive 1 free game and become a legend”. An initiative that was started by Ken – for locals to get noticed.

“Its great to see people try to get on the board to win a free game” said Linda.

The achievement from Ken has made management realise it might be time for another piece of recognition to lie within the walls at Bunbury Tenpin.

“I would love to do something to display Ken’s and the centres first 300 here” explained Linda.

Congratulations to Ken Temme on his 300-game achievement! Some good news in a strange year!