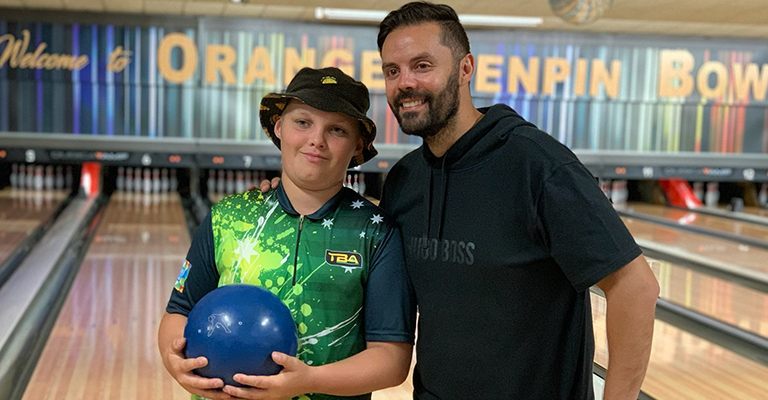 2019 has been a momentous year for 12-year-old Mitchell Parsons from Parramatta Park in Cairns, North Queensland.   A student at Cairns State High School and keen tenpin bowler, Mitchell was selected to represent North Queensland in the sport’s prestigious interstate Teams event – the President’s Shield Trophy – but a month before travelling to Melbourne to compete earlier this year, he was diagnosed with Lymphoma B-Cell.

Family and friends rallied to his support and following several months of treatment, Mitchell’s brave battle to overcome cancer was rewarded with a special Starlight Wish.

Organised by the Starlight Children’s Foundation, Starlight Wishes are created to excite and inspire children living with a life changing illness or disease and aim to act as a positive distraction, replacing stress, pain and hospital visits with fun, laughter and excitement.

It was no surprise when Mitchell revealed his dream of having an intensive one-on-one training session with the world’s top bowler – Aussie champion Jason Belmonte – at Orange Tenpin Bowl where Belmonte’s illustrious career began.

Accompanied by his parents, his uncle and coach Jamie Miller and cousin Bailey Miller, who is also his training partner, Mitchell and his family flew to Sydney before making the scenic drive across the Blue Mountains to Orange to meet his hero ‘Belmo’.

The visit was timed to coincide with a short break in Belmonte’s hectic schedule of commitments on the Professional Bowling Tour in the United States, and Mitchell and his family were warmly welcomed on their arrival at Orange Tenpin Bowl.   The group enjoyed meeting, and bowling with the world’s number-one player in his home Centre and following Mitchell’s highly-anticipated training session with Belmo the visit culminated with an impromptu contest.

After calculating a handicap based on their respective averages, Mitchell and Belmo hit the lanes, and buoyed by the tips he’d learnt during the earlier training session Mitchell stormed home to an exciting win.  His victory came with the bonus of a new signature series STORM Pro-Motion bowling ball, along with an autographed poster, capping a day that Mitchell’s family said will be long remembered.

“To not only meet Jason Belmonte but to bowl with him has made Mitchell’s year, which has been quite difficult at times.  “To be away from his family and friends for six months and to go through intensive chemo is very hard for a 12-year-old, and felt like a lifetime to him,” his father John Parsons said.  “Our family is very thankful and appreciative that Jason Belmonte, Marisa and Aldo Belmonte, the Orange Bowl and staff took time out of their busy lives to make this wish come true for Mitchell,” he continued.

“The constant smile on Mitchell’s face during the day said more than a thousand words could … Belmo has a fan for life (another one),” added his uncle, Jamie Miller.

With the family now back in Cairns, Mitchell is looking forward to sharing details of this unique experience with his friends and fellow bowlers at Go Tenpin Cairns, and has his eyes firmly set on using his newly-won bowling ball to return to competitive bowling and qualify for next year’s North Queensland President’s Shield team.