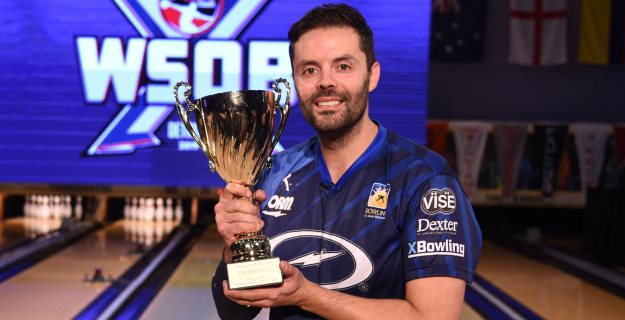 Australia’s Jason Belmonte has won his 20th career PBA title at this morning’s Chameleon Championship, where four PBA titles including a major are on offer at the PBA World Series of Bowling in Detroit, Michigan, this week.

In the championship match, Belmonte defeated three-time PBA Tour champion Andres Gomez, 236-194, at Thunderbowl Lanes for his second title of the season.

During the match, Belmonte had a clutch double in the eighth and ninth frames to take the lead and the victory was sealed when Gomez left and missed a 10 pin in the ninth frame.

Following the win Belmonte reflected on his 20th victory on the toughest bowling circuit in the world.

“Holding the trophy up for the 20th time tonight is absolutely insane to me.  To reach such a milestone wasn’t ever something I thought was possible, but now that it’s here, I couldn’t be prouder and happier,” the 10-time PBA major winner said.

The win sees Belmonte join Norm Duke and Dick Allen with two PBA titles in 2019.  Having won the PBA Tournament of Champions, a major on the PBA calendar and finishing second at the PBA Players Championship the Australian has the edge on his rivals in the player of the year race.

However, Belmonte will have a chance to add to his PBA titles in the coming days as he has qualified in the field for tomorrow’s PBA Scorpion Championship and has already earned the top seed for the season’s third major, the PBA World Championship, to be contested on Thursday night (local time).  Belmonte also joins fellow Australian Sam Cooley in the World team who will compete against the US on Friday March 22nd.

In the lead up to his victory tonight, Belmonte was the top qualifier and in the semi-final this morning Australian time, the 35-year-old survived a close match against AJ Chapman, which saw the competition move into the arena bay section of the bowl.  Coming down to the final frame Belmonte struck on his first shot to leave a 4-10 split on his second leaving the door open for Chapman.

Needing a double and four pins to secure the victory, the American got the first one but went wide right on the second to hit the pocket and leave the 10 pin.  That was enough to see Belmonte move into the championship match.

The World Series of Bowling continues on Wednesday (local time) with Belmonte having a chance to win his 21st PBA title in the PBA Scorpion Championship finals.

For the latest standings visit www.pba.com or to catch the action visit www.flobowling.com.