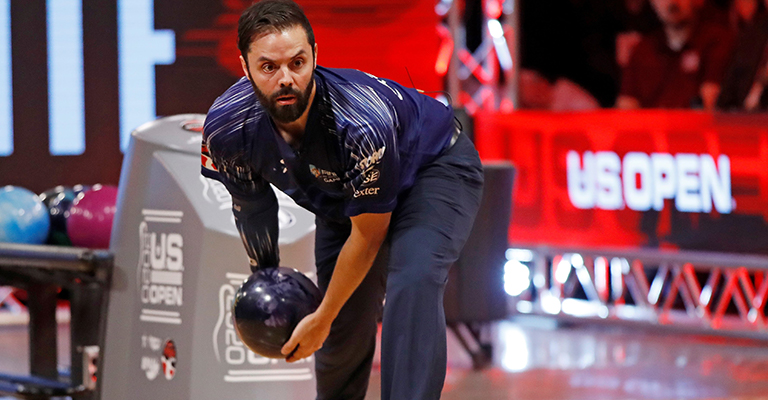 LINCOLN, Neb. – Australia’s Jason Belmonte no longer will have to answer questions about when he’s going to win the U.S. Open or what it would mean to have the iconic green jacket as part of his wardrobe.

The 36-year-old two-hander finally was able to add a U.S. Open title to his resume Sunday at Sun Valley Lanes with a 226-201 win against top seed Anthony Simonsen of Little Elm, Texas.

The championship round of the prestigious event was broadcast live on FOX, and, in addition to the coveted outerwear, Belmonte took home a $30,000 top prize.

He secured his latest place in the record book in dramatic fashion, converting the difficult 3-6-9-10 spare to shut out Simonsen.

Belmonte, the five-time and reigning Professional Bowlers Association Player of the Year, previously made the stepladder at the U.S. Open on three occasions, finishing third in 2012, second in 2013 and fourth in 2019.

The meeting Sunday was a rematch of the title tilt at the 2019 PBA Players Championship, where Simonsen defeated Belmonte to become the youngest competitor with two major titles. At the same time, he denied Belmonte his record 11th major win, which came a month later at the PBA World Championship.

The two also met in the stepladder at the 2019 U.S. Open, where Simonsen defeated Belmonte on the way to a third-place finish.

This time, Simonsen, 23, was looking to become the youngest bowler in PBA Tour history with three major victories.

“My first thought was, I just wanted to let all the air out of my lungs and yell,” Belmonte said. “It’s an incredible feeling. I feel for Anthony. In 2013, I lost the U.S. Open title in the exact same way. I led by hundreds and hundreds of pins and lost to Wes Malott. We will talk later, and I’ll tell him, ‘Hey, mine came seven years later, you’ll get yours.’

The record-extending 12th major title Sunday was Belmonte’s 23rd career victory on the PBA Tour and helped him join United States Bowling Congress and PBA Hall of Famer Mike Aulby as the only players in history to complete the Super Slam, which includes the U.S. Open, USBC Masters, PBA Tournament of Champions, PBA World Championship and PBA Players Championship.

The win came after some recent struggles on TV, including a career-low 148 game in the stepladder of the 2019 U.S. Open in Mooresville, North Carolina.

“I don’t think I was bothered by it, because I don’t even think I was aware of it,” Belmonte said of the struggles on TV. “When something is going wrong, it’s so much better to understand why, and try and fix it. Once I had a better idea of what was happening, I was able to work on it. I’m really proud of myself for not hiding behind the thought that it was just a couple of bad weeks.”

Strikes in five of the first six frames, including four consecutive starting in the third frame, gave Belmonte a lead of more than 20 pins halfway through the final.

Simonsen missed the headpin in the sixth frame after two strikes of his own, leaving the 1-2-8 combination. He converted the spare and doubled again, before a 10 pin slowed the momentum. It wasn’t enough to take the lead, but it did put pressure on Belmonte.

Belmonte entered his final frame with a chance to shut out Simonsen, a seven-time PBA Tour champion. He struck on his first shot, but his second offering drifted high, setting up the exciting finish.

As the event ended, Simonsen showed that he’s mature beyond his 23 years, offering a heartfelt congratulations to Belmonte, who has been a pioneer using the two-handed style Simonsen also employs.

“I told him I was happy for him, and that he has given me something to shoot for,” said Simonsen, who won the 2016 Masters at 19 years old for his first major title. “I bowled a pretty good last game, and there is only one shot I would want back, so, it is what it is.”

Belmonte has been in Simonsen’s position and reiterated that he knows the young star eventually will hoist the trophy at the U.S. Open.

“He is such a good kid,” Belmonte said. “He was congratulatory, and he told me he wants me to set a number he can chase. It’s an amazing thing to hear from him. He’s someone I’ve kind of taken under my wing. We’ve had many great conversations about bowling and about us as human beings. He’s such a good guy. He’ll get his.”

To earn the opportunity to take on Simonsen in the title match, Belmonte again delivered in the clutch, striking on the first shot of his final frame to shut out seven-time PBA Tour champion Dick Allen of Columbia, South Carolina, who was searching for his first major title. Belmonte advanced by a score of 215-187.

Belmonte had fallen behind early in the semifinal when Allen started the match with a double, but the 41-year-old right-hander wasn’t able to strike again until his fill ball, when the game already was out of reach.

Strikes in the sixth and seventh frames gave Belmonte the lead for the first time, and that increased when Allen left, and failed to convert, the 4-6-7-10 split in the eighth frame.

On the way to the semifinal against Belmonte, Allen stayed clean, including one double, to outdistance former Team USA member Perry Crowell IV of Chesterfield, Michigan, 205-181.

Crowell, a 28-year-old right-hander and former standout at nearby Midland University, was the first amateur to make the U.S. Open stepladder since Finland’s Osku Palermaa accomplished the feat in 2004.

He was looking to become the first amateur since the creation of the PBA in the late 1950s to earn the green jacket.

In the day’s first match, Crowell cruised to a 241-203 win against 27-year-old two-hander and former Team USA member Chris Via of Springfield, Ohio, tossing six consecutive strikes after an opening-frame spare.

The two previously met in the televised semifinals of the 2014 Intercollegiate Singles Championships, where Crowell defeated Via and then lost to now two-time U.S. Open champion Francois Lavoie of Canada in the final.

Lavoie entered this week as the defending champion. He finished 10th, falling 204 pins short of the stepladder.

The majority of the bowlers at the 2020 U.S. Open earned direct entry into the event based on their on-lane performances throughout 2019, while 20 bowlers advanced through the 64-entrant pre-tournament qualifier.

All 108 competitors bowled 24 games of qualifying over three days (eight games each day), before the field was cut to the top 36 for the eight-game Cashers’ Round.

Each day of qualifying featured a different oil pattern, and a fourth condition was introduced for the Cashers’ Round, match play and the TV show. The patterns ranged from 37 to 44 feet.