Belmo vs. Tiger – The Similarities Are Freakish 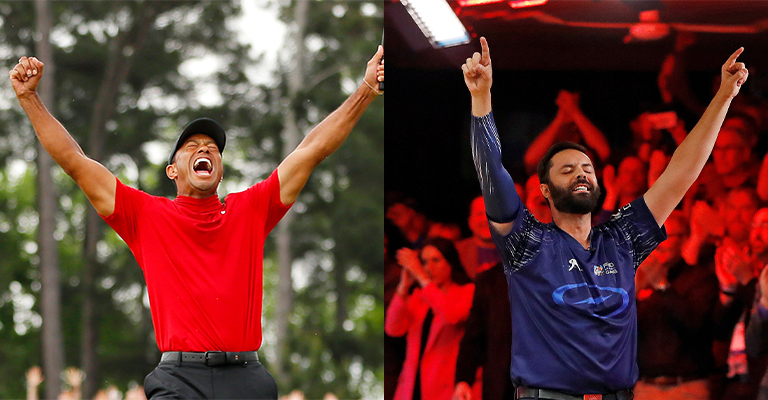 The Stats Say It All

The outstanding career success of world champion Aussie bowler Jason Belmonte is often compared to the best of the best in various international sports….’the Pele of the pins’ etc.

“Could a bowling wonder from Down Under be our sport’s answer to Tiger Woods?” asked Bob Johnson, author of a feature article in BOWLERS JOURNAL INTERNATIONAL early in Belmonte’s career.

“Think of the most fearsome, dominant individual-sport athletes of the past couple of generations. “At their best, you had little chance of beating them. Mike Tyson. Michael Phelps. Tiger Woods. Serena Williams. Jason Belmonte. Usain Bolt …” wrote WASHINGTON POST columnist Norman Chad.

“It seems fashionable these days to refer to a supremely talented, once-in-a-generation player in his or her sport as the GOAT. “Certainly, labelling someone as the greatest of all-time can be very subjective, but in the case of professional bowler Jason Belmonte there are numbers to back it up….” Lewis Bagley pointed out in the Indianapolis INDY STAR.

And now, self-described ‘numbers geek’ and data analyst Jake Boresch has turned his talents to publishing a fascinating analysis of stats and graphs in “OFF THE LANES” that highlights the ‘freakish’ similarity in the careers of Tiger Woods and Jason Belmonte – (https://offthelanes.com/belmo-vs-tiger/)

His graph of Major Tournament Finishes is captioned by Boresch as “the best way to describe the chart above is mind-blowing.” “It’s fair to say that Jason Belmonte’s current run on the PBA Tour has been nearly as dominating as Tiger Woods in his prime years on the PGA Tour.”

“On top of his accomplishments, Belmo continues to inspire and influence bowlers across the world with his two-handed delivery. “The style continues to gain popularity and has become more prominent in the sport, especially with younger generations of bowlers,” he continued.

“Jason Belmonte’s dominance and influence on the sport of bowling deserves to be recognised,” Boresch concluded.

The stats say it all!