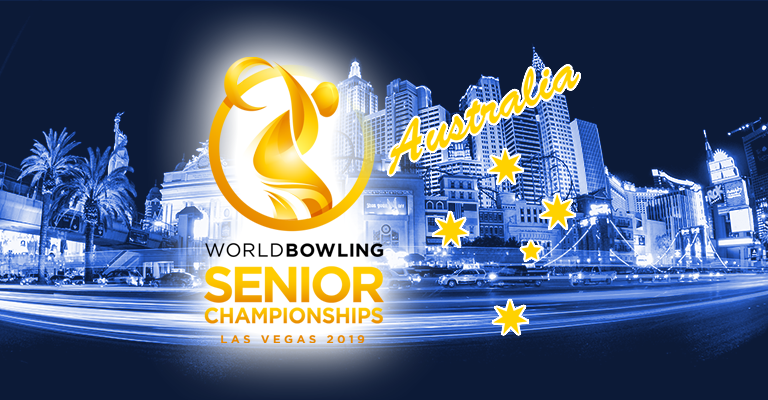 Please note the dates/times listed in this article are converted to Australian dates/times. Key links and details at the bottom of the page.

Tag! As one championship concludes, a new one begins. The South Point Bowling Plaza is set to host the second world bowling event in a row with the World Senior Championship scheduled to begin tomorrow morning in Las Vegas, USA.

A whopping 262 athletes from 42 countries will arrive in Vegas for six days of official competition, starting Thursday the 5th September 2019.  Whilst the World Women’s scheduled qualifying and final squads on separate days, the senior’s finals will commence at the conclusion of the qualifying squads (both genders) of each discipline.

Action will begin on Thursday morning with the men to participate in the singles from 2:00AM AEST, before the ladies have their chance on Friday in the same time frame. The Australian team of four women and four men will strive for medals in singles, doubles, teams, all events and master’s proceedings.

The Australian senior head coach is Tenpin Bowling Australia 2013 Hall of Fame inductee – Eric Jang. Jang, who has extensive experience is excited about the upcoming opportunity that awaits the team.

“Many of the sports professional & International super stars are competing in the 2019 World Senior Championship. I along with all team members look forward to banging heads and seeing how we stack up against this illustrious group”.

A pioneer in the country for the sport, Jang competed in the first ever major Australian tournament at Leichhardt Bowl, Sydney in 1962 and was crowned national champion. With that win he received a trophy, a trip around the world by Qantas, a thousand pounds, and the right to represent Australia at the Worlds Invitational Championships in Chicago that year.

After coaching the Australian World Men’s team in Hong Kong last year, Jang is well aware of the key elements that need to be considered heading into championships.

“In today’s competition environment, equipment set up and tactical responses to lane transitions during play is of paramount importance and more consideration has been given to this area in our limited training and preparation sessions” explained Jang.

Joining Jang, is another hall of fame inductee (1986), Jeanette Baker. Affectionately known as ‘JB’, Baker is a legend in the sport. Having represented Australian in FIQ competition many times and a victor of numerous medals, Baker will be keen to add to the collection in Vegas. A four time National Adult Master Champion and nine time National Seniors Cup winner, Baker is a bowler that many look up to and aspire to emulate. One of those is her teammate in Vegas, Heather Robertson.

“I’ve always been a fan and looked up to her” stated Robertson. “You don’t get much better than JB in enthusiasm, power and passion in bowling, so I’ve always tried to use her as a benchmark. Over the years it’s worked out pretty good for me and hopefully this trip will too”.

Robertson returns to the national squad after representing Australia at the Inaugural 2013 World Bowling Senior Championships and winning a bronze medal with Baker. Robertson says the difference this time around is the amount of practice and tournaments that she has done in preparation for the championships.

“I’ve tried to throw as many balls as I can in the last few months and hopefully all that will help in the upcoming championships”.

Bendigo bowler Christine Clark will be one of two rookies in the female team that will be making their green and gold debut on the World stage. A member of the 2018 Victorian TBA Seniors team that took the female and overall titles, Clark will join fellow teammates Jeanette Baker and the second rookie of the team, Mary Dodds.

Dodds who has represented her state of Victoria consistently since 2001 is excited to join her teammates who she has shared many memories with.

“I’ve shared many years at state level competing against and alongside these three other amazing women who join me at the World Championship” explained Dodds. “JB who has been at the top of our game for many, many years; World Champs bronze medallist in Heather Robertson who is a fierce competitor and fellow first timer and my good friend of many years Christine Clark who recently bowled a 300 is coming into fantastic form. All these women at some point have inspired me to be the bowler I am today and to be in a team alongside them representing our country will be a moment I will cherish for a very long time”.

“My advice would be to try and enjoy the experience as there is no better feeling than pulling on the green and gold, whether it’s your first or tenth time. I would also tell them to bowl like we do at any other tournament as it is no different – just get out there and knock the pins down” explained Muir on what advice he could share to those making their debut for Australia.

Due to injury, Andrew Frawley was a late withdrawal from the team which activated the first reserve of the team, Shaun Cummings. Cummings, will be entering his third World Championships (2013, 2015) and has always performed strongly in Australian colours. Winning a Silver and two bronze in 2015 then backing it up with dual bronze medals in Munich, Germany at the 2017 Championships, he will look to continue that trend in Vegas.

Another 2013 World Senior Championship representative and 2018 TBA Senior Cup winner Mick Talevski returns for another Australian campaign. Arriving in Vegas at the end of July, Talevski has spent his time acclimatising to Vegas with friends, putting time in practice and participating in local tournaments at the World Championship venue – South Point Bowling Plaza.

“I have dreamed about this for 5 + years to represent my country. Now I have the chance I am over the moon” explained Talevski.

A fellow Victorian helps round out the men’s team in Andrew Thorpe. Bowling since the age of 12, Thorpe will represent his country for the first time in Vegas. A sporting goal of representing Australia as a senior has finally come to fruition.

“All the practicing and effort to keep improving has been rewarded at the highest level” explained Thorpe. “It’s a great honour to be selected to represent our country competing in the sport I love and have played since childhood”.

Another World Championship, and another opportunity for bowlers to live out lifelong dreams of representing their country. What it means can be best summed up by team rookie Mary Dodds:

“I don’t think I can put into words that feeling you get when you receive the call that you’ve been selected to represent your country…I think the first thing I did was cry tears of absolute joy… all the years of dreaming those dreams suddenly becomes reality. It truly is a surreal feeling one of absolute honour and joy”.

The World Senior Championship will be streamed and available to watch on dailymotion. World Bowling has recently partnered with dailymotion to broadcast all their events on. Please go to https://www.dailymotion.com/World_Bowling or download the dailymotion app in your phones app store. Search and follow worldbowling.