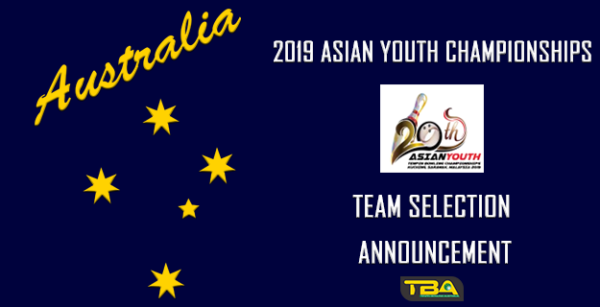 The team will compete in Kuching, Sarawak, Malaysia from April 17th to 26th at the 42 lane Megalanes Sarawak centre.

The 2018 National Ranking Youth winner and 2019 Youth Cup champion Chloe Jones is set for her fifth year representing her country.  Returning to the same bowl in 2017 where Jones claimed a silver medal at the Asian School Championships team event, Jones will be joined by silver medal teammate Kylie Bailey.  Ivy Dickinson joins the girl’s team in her first for the Youth Division after a strong performance in the 2019 Youth Team Challenge and claiming a silver medal in last year’s Asian School doubles event.  Emma Stephens makes her Australian debut after years of consistent performances on the local circuit.

2018 was a successful year for the Australian Youth team where they claimed a silver and bronze medal at the World Youth Championships in Detroit, Michigan.  The team will again be coached by Youth National Training Squad head coach Robert Alexander.

More information on the tournament can be found on the official website here.