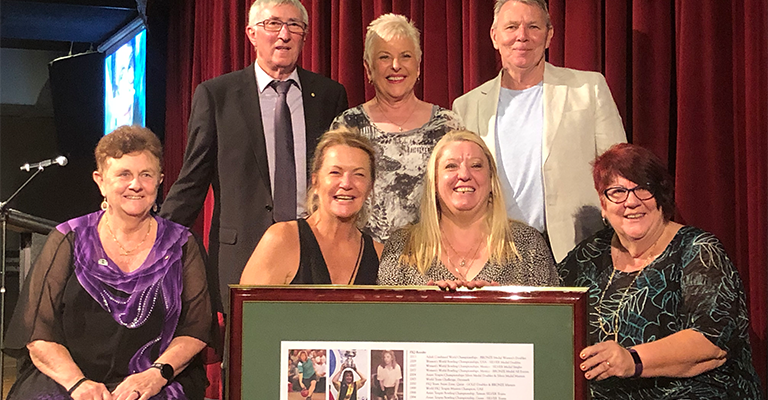 Not a rookie to Hall Of Fame inductions, Putney had previously been inducted into both the World Bowling Writers Hall of Fame in 2009 and the Hunter Region Sporting Hall of Fame earlier this year. Now part of the TBA Hall of Fame, Putney is proud and relieved to be part of the celebrated group.

“It’s great, it’s about time!” said an excited Putney. “I do feel like I’ve done a lot, but it’s not till you sit down and read the list of achievements, you think wow…I really have done a lot and it’s a great honour to be recognised like this”.

Former Australian team member and CEO of Tenpin Bowling Australia Cara Honeychurch helped clarify the reasons why Putney was being inducted into the Hall Of Fame.

“AMP’s performance is almost unrivalled in this country. A winner of the prestigious Bowling World Cup and World Championship Masters Gold medal, her list of achievements at both the international and national level reads a mile long. AMP took enormous pride in representing not only Australia but her beloved NSW and was a critical component of the dominant Women’s NSW Rachuig team for so many years”.

A decorated and celebrated champion at the end of it, bowling began from boredom at the age of 10 years old for Putney.

“Mum and Dad used to bowl league on a Sunday night and I used to sit there watching it and I hated it!”  said Putney. “One day I asked mum if I could have some money to go have a game and mum was shocked. She said ‘thank god I’m sitting down!’ and I went to go have a game and got a score of 108. That’s where it started and I was hooked since then”.

Through years of perseverance Putney would have an amazing junior career with wins throughout. One year specifically that kick started her success on the lanes saw Putney being crowned champion in the Sydney Junior Cup, Melbourne Junior Cup and the Brisbane Junior cup, all in the one calendar year.

Originally coached by Graham Lee in the early days, Putney would bowl without a coach for many years. At the age of 20 years old, she was approached by Geoff Bowness to become her coach. Since then, “we went from there” explained Putney.

Labelled as a key influencer on her career, Bowness would coach Putney for 24 years and have a real impact on Putney’s bowling. The two would complement each other with different skill sets that provided the outstanding results Putney was renowned for.

“He did all the brain stuff!” said Putney tongue in cheek. “He used to be a school teacher and he just knew how to explain things differently to others, he delivered the message in a way that got my attention”.

With the appointment of Bowness, Putney’s success started to take form. A youth division was yet to exist but Putney would get her one and only appearance in the newly formed youth division after it was introduced in 1991. That year, Australia sent a youth team to Guam for the Asian Youth Championships where she was part of the Gold Medal winning team of Sharon McLeish, Danielle McAdam and Cara Honeychurch.

“When I put that green blazer on, it was an amazing feeling and one I’ll never forget” explained Putney.

When asked if Bowness had the biggest impact on her career or if anyone else had an influence, Putney replied without hesitation.

“Me!”.  Evidence of the character references you hear of the superstar. A demeanour that ‘tells it like it is’ providing a very likeable character.

“I did it all myself, I obviously had people help me along the way but ultimately it was me, if I didn’t do it, I didn’t want to do it”.

Bowness who has been coach to many champions to this day explained what it was about Putney that separated her from others.

“Ann-Maree had a desire to win. She was one of the first to introduce a true power step in her approach and step pattern as a completely natural part of her game. As part of her game I saw ‘instinct’. It’s really hard to teach instinct but it came within her package” said Bowness. “When you combine a natural power step + a desire to win + instinct, then a champion lives within”.

A champion would officially be revealed in 1999. Putney would claim her first international title with Gold in the Masters event of the FIQ World Championships in Abu Dhabi.

The illustrious QubicaAMF World Cup would be one event that Putney would also use to announce herself to the bowling world. Making her debut in 1997 in Cairo, Egypt, Putney would finish in fifth place on her first attempt. A result that proved to kick-start many years of success at the famous event.

The ultimate success came in 2007 where Putney would be crowned World Cup Champion at the 43rd World Cup in St Petersburg, Russia. In a sliding doors moment, Australia would have two representatives in the finals of this famous World Cup. The Australian male representative with Putney in St Petersburg was Jason Belmonte and even though ‘Belmo’ lost the final against Bill Hoffman and came second, the experience had a lasting impact.

“Watching Ann-Maree do that, watching her win inspired me to want to do the same for Australia at the World Cup” explained Belmonte. “Watching her bowl that tournament, I don’t think I ever watched her bowl as well. Her dedication, her attitude to the way she played that week really inspired me and I know when she came home with the cup it inspired an entire generation of players”.

“It was all highlights!” answered Putney on what was the highlights of her career. “There was so, so much that happened, there was always ups and downs, but it’s like that in every sport”.

Other than her international efforts, Putney thrived on home soil where she made the Rachuig event her own. Representing her beloved state of NSW 19 times with 319 games bowled to her name, Putney still holds two records that exist to this day.

In 2001 Putney joined Cara Honeychurch as the highest pinfall bowled in a single year with 4,453. Then in 2008, Putney bowled eighteen 200 plus games during Rachuig, the most held by a female. It was fitting that Putney would be inducted into the Hall Of Fame with Rachuig bowlers present.

“I just loved the team aspect” explained Putney. “I am a team player, I just used to love playing in a team, playing with Sue Cassell, Katey Stuart and Amanda Bradley back in the day, ‘the gang’, that was the best! No one could beat the gang!”.

Cara Honeychurch helped explain the attributes that Putney possessed that made her so good.

“AMP was simply an outstanding competitor.  Incredibly consistent, AMP rarely put in a bad performance.  Her accuracy and speed control was a feature of her game and when she was “locked in” she was incredibly tough to beat.  AMP had an incredible fighting spirit and a never give up attitude”.

A bowler who has experienced so much success is bound to possess key attributes to help them on their journey. A short but important attribute was answered by Putney “Being a positive person. I just am always looking on the positive side of things’.

Putney likes short and simple answers. This is not a bad thing. This is exactly what contributed to the great success she experienced on the lanes and the glowing character endorsements that the bowling community has of her off the lanes.

“One of the attributes I admired the most with Anne Marie is her ability to keep the game as simple as possible” said Honeychurch. “She never lost sight of the fact that the objective of the game is to knock over 10 pins and she just got on with doing it – and doing it well.  Whilst others were focused on lane patterns, ball surfaces and a myriad of other distractions, AMP got on with getting lined up and striking”.

The myriad of other distractions like lane patterns and ball surfaces was something Putney never paid attention to.

“I didn’t want to learn or know that crap!” said an honest Putney. “I never got into the ball drilling or technical side of things, that’s the coaches job, that’s the ball drillers job, not me, I don’t need to know that, I just throw the ball down the lane” said Putney with a laugh.

A disregard for the technical side of the game didn’t mean a disregard for hard work. In her own words she “worked bloody hard” for the success she gained and “nothing was handed to her”.

“I did it all myself with help from mum and dad paying for things. I never had the sponsors and everything like that when I started like everyone has now on a platter” explained a proud and cheeky Putney.  “I got a ball sponsor for maybe the last 10 years of my career and it literally was 8 bowling balls a year, not like it is now, where you get some every month”.

In 2014, Ann-Maree hung up the shoes and retired from the game that she gave so much too. The reasons for her retirement was to have more time focused on her two sons. “I have had a great chance to do what I wanted to do when I retired” said Putney.

Five years on from retirement, Putney popped into the new revamped Warners Bay Superstrike to have a look. Has the champion had an itch to return to the lanes?

“I stood on the approach and said to myself ‘I don’t miss this’” said Putney with a laugh. “I miss the travelling and the people of course but I am done and dusted with the bowling…done and dusted!” said an honest Putney.

Ann-Maree Putney provided 34 years of wonderful service and achievement to the sport in this country. A jam packed career full of achievements that many would feel is impossible to replicate. A fierce competitor on the lanes, a genuine good person off them.

For all that Putney has given, she has received the thing she holds dearest in return.

“Great friendships with everyone”.

An expected answer from an unselfish champion that knew her strengths and worked ‘bloody’ hard to become one of the best in the business. A testament to hard work and not taking life too seriously, Ann-Maree Putney, forever a champion, the 33rd  member of the TBA Hall Of Fame.