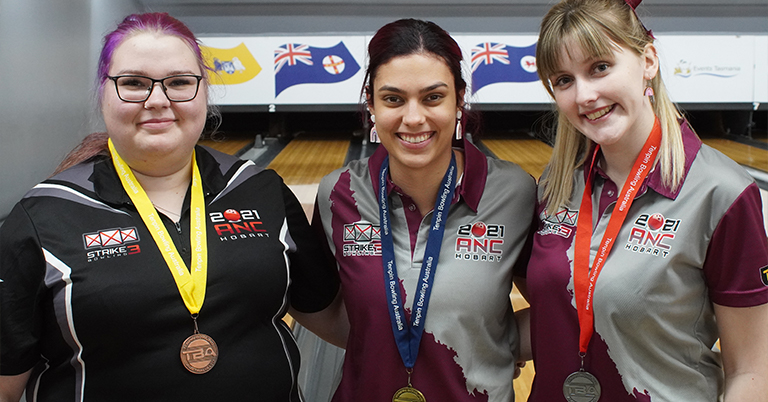 The TBA21 Team Challenge kicked off this morning at Zone Bowling Moonah in a unique way where the Singles and half the team’s event were completed.

This year’s event is between two teams – Queensland and New Zealand. Due to COVID restrictions and some states and territories unable to pull together teams, the event will proceed with two teams in a compressed schedule over two days.

Both teams completed their singles event today as well as half the team’s event. Tomorrow teams will bowl the doubles event followed by the second half of the teams’ event to conclude the TBA21 Team Challenge.

Congratulations Ivy Dickinson (QLD) and Ryan Julian (NZ) who have won the gold medals on offer at the TBA21 Team Challenge singles event.

Less than 24 hours from winning her TBA21 Masters, Ivy Dickinson continued her impressive bowling as the singles event got underway. Averaging 202.2 over the six and posting 1,213, Dickinson would win gold for her team in the first event for the TBA21 Team Challenge. Sitting 55 pins behind was fellow Queenslander Emily Bottomley, while New Zealander Melissa Moore would claim bronze to round out the placegetters.

For the boys, after finishing runner up in the TBA21 Masters, New Zealander Ryan Julian went one better today by claiming gold in impressive fashion.  Averaging an incredible 253.7 over the six games, the New Zealander claimed gold with games of 280 in the fifth and 300 in the sixth to complete an 804 series in his last three games. The perfect game by Ryan becoming the third 300 game bowled at ANC2021. To view the 10th frame of Ryan Julian’s 300 game, click here. Queenslander Cameron Stein would claim silver, whilst Ben Pettit would add to his collection of achievements claiming bronze. Ryan Julian led the boys again hot from his recent singles gold medal win. The incredible bowling continued for the New Zealander who averaged 254.7 in the first three games.

The other gold singles medallist in Ivy Dickinson would also help her team off to a good start. The Queenslander is averaging 203.17 over her first three games.

After one and a half events completed, New Zealand is holding onto a single point lead in the TBA21 Team Challenge overall standings.