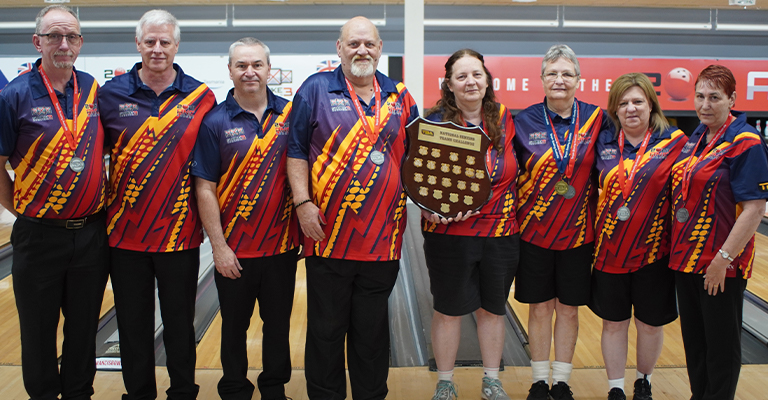 South Australia captured the last event on offer at this years Australian National Championship after being named the TBA50 Team Challenge champions for 2021.

It’s been a decade since a team from South Australia (SA) has raised the overall/combined trophy of the Senior state vs state national event. The 2021 achievement becoming the states second overall title and first since 2011’s AMF Rooty Hill victory in New South Wales.

Consistent performances across the board from both female and male squads would see the team from South Australia walk away with the combined division title. Finishing on top of the female division and runners up in the male division, the team would collect six medals throughout the three days of play, two of each colour.

After finishing runner’s up in the earlier run TBA50 Cup and taking out the TBA60 Cup, South Australian Jill Morris backed up the performance the next day by winning gold in the female singles event.

The bowler from Zone Bowling Cross Road was outstanding. After averaging 199 in the match play section of the TBA50 Cup, Morris would return with fire the following day, averaging 202.2 over the six games to claim gold and provide a solid start for the team from SA. A pair of Territorians in Janine Matheson and Kaye Talbot would round out the placegetters for the female division, finishing second and third.

For the men, a Tasmanian legend would win gold. Ashley Riley.

After finishing in third place in the TBA50 cup, Riley would return with a vengeance in the Teams Challenge, averaging an incredible 249 over his six games to claim gold. Fellow Tasmanian Lyall Gunn would claim silver, while Morty Douglass would finish with the bronze medal. 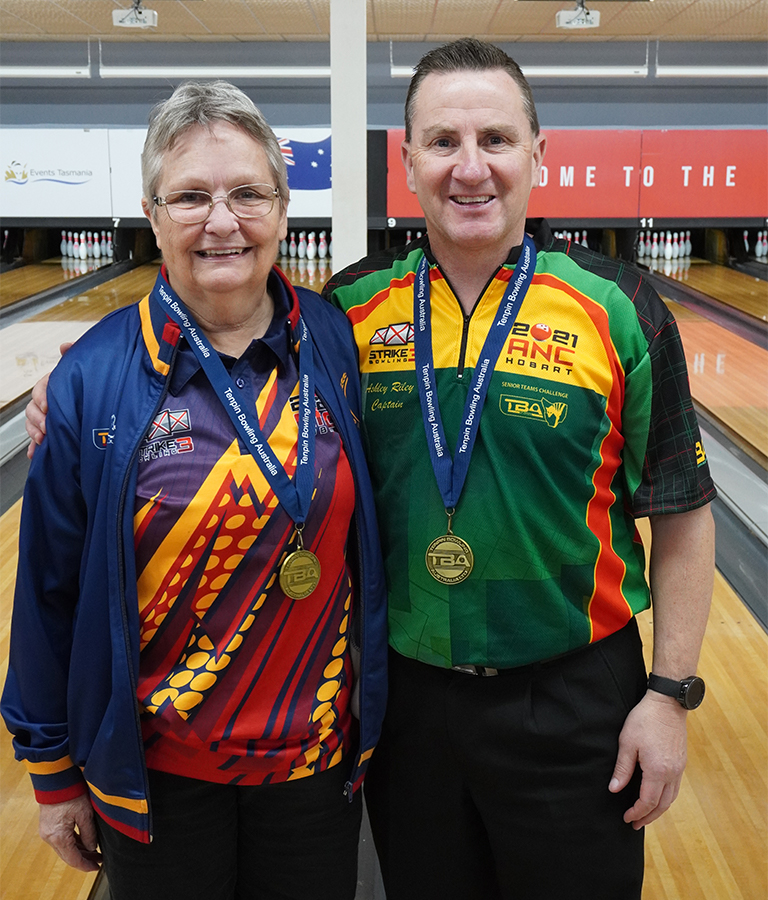 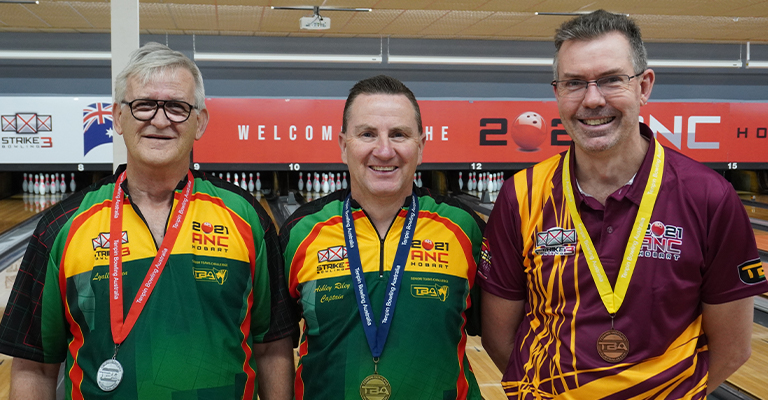 Pairing up with Maria Hansen in the doubles, the team from SA would finish 126 pins ahead of their nearest challenger on their way to claim the gold medals. Janine Matheson and Yvette Thompson would continue to ensure the team from the NT would remain close in the female division finishing with the silver medals. In third place would be SA’s second pairing of Tracey Howie and Joylene Dite, edging out WA pairing of Brenda Kirkwood and Maxine Forrest by 50 pins.

For the men, the host state of Tasmania would continue to extend their lead in the division.

After gold and silver in the singles, the pairing of Lyall Gunn and Ashley Riley would be an imposing combination for teams to chase. Heading into the sixth game, the pair looked to be adding gold to their collection. Instead, the second Tasmanian pair of Garry Crick and Phillip Wilkinson would overtake their counterparts with a 489 combined sixth game score. South Australian’s Andy Palmer and John Melnik would claim the bronze medals and the first for their state in the division. 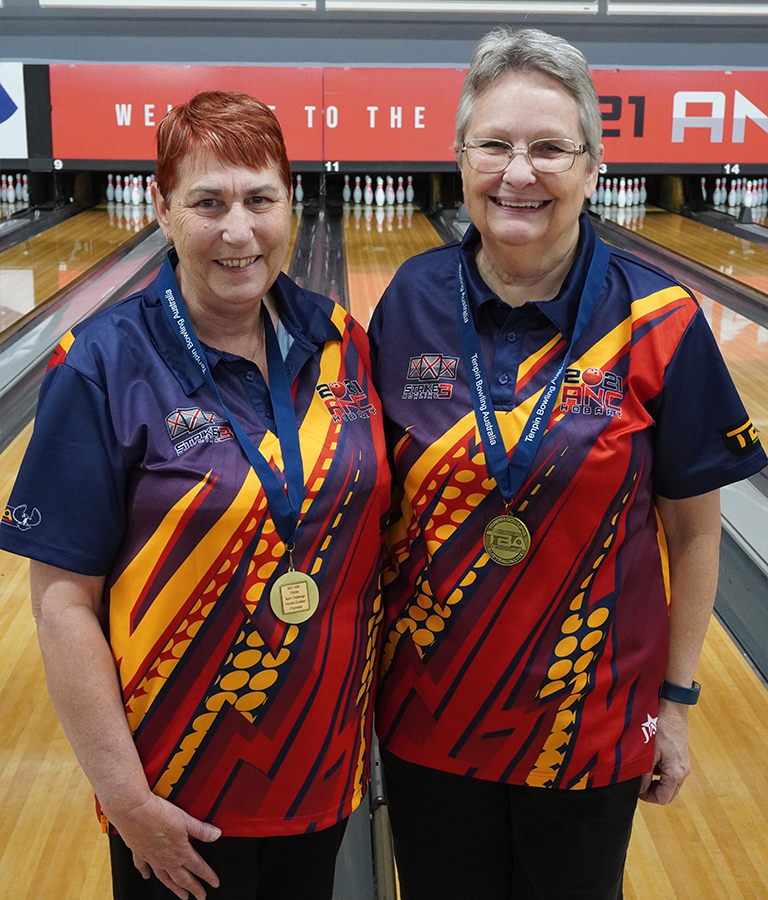 A determined Northern Territory team would win gold in the female division after impressive performances throughout the challenge. The Territories State Manager in Janine Matheson would lead the way for the team from the NT. Already claiming two silver medals from the singles and doubles event, Matheson would go one better in the team’s event claiming a gold medal for the girls from NT.

South Australia would claim the silver medal ahead of the Tasmanian team, who would finish with bronze.

For the men, after winning gold in singles and doubles, the home state team would go three from three, capturing the last gold medals on offer for the challenge. Ashley Riley and Garry Crick would average 218.2 and 217 over the six to steer the team from Tassie to a 132-pin gap between first and second. The second team being South Australia, and the Northern Territory men’s team claiming bronze. 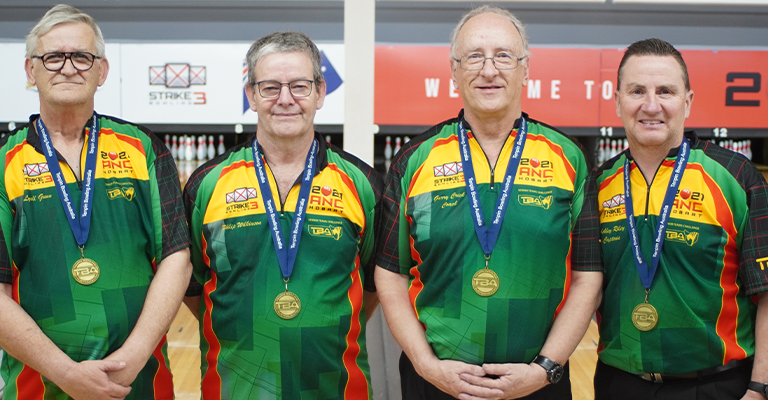 The following bowlers received the medals in the All Events category. Performances are from the completion of the 18 games of the challenge.

South Australia are the TBA50 Team Challenge champions for 2021. The overall champion title, their first since 2011’s victory at AMF Rooty Hill in New South Wales. Finishing on 1,128 points (542 male, 586 female) and 27, 217 pinfalls, the overall victory would be the states second in the senior’s national state vs state event.

South Australia are the TBA50 Team Challenge Female Champions for 2021. The victory is the states first female title since 2009’s AMF Mt Gravatt victory. Finishing on 586 points, and 12, 552 pins, the team from SA would maintain the top spot on the female ladder throughout and hold off a fast-finishing team from the NT.

Tasmania are the TBA50 Team Challenge Male Champions for 2021. The victory is the state’s first title in any of the divisions throughout the 14 years the formatted event has run.

That concludes the 2021 Australian National Championship at Zone Bowling Moonah!

A HUGE Thank you to Strike 3 Bowling, Ashlee, Mark and Morty for all their incredible efforts in running the event through challenging and unprecedented times over the past few weeks. Thank you to all the bowlers who were able to travel and compete in the events. To all those that unfortunately couldn’t be there – fingers crossed 2022 will allow the event to return bigger and better than ever!