Congratulations to New Zealand who have been crowned the 2021 TBA21 Team Challenge Champions at Zone Bowling Moonah this afternoon.

After completing their singles and half their team event on day one, teams returned to the lanes on day two to compete in Doubles and the last three games of teams to reveal the TBA21 Team Challenge champions.

Led by Ryan Julian, the New Zealand boys would win the male division, whilst led by Ivy Dickinson, the Queensland girls would take out the female division.

In a tight tussle throughout the two days, in the overall point score table, New Zealand would defeat the Queenslanders by 5 points – New Zealand 1,187 defeated Queensland 1,182.

We thank all bowlers and team officials who got the chance to compete in the TBA21 Team Challenge this year. We wish you all safe travels home! 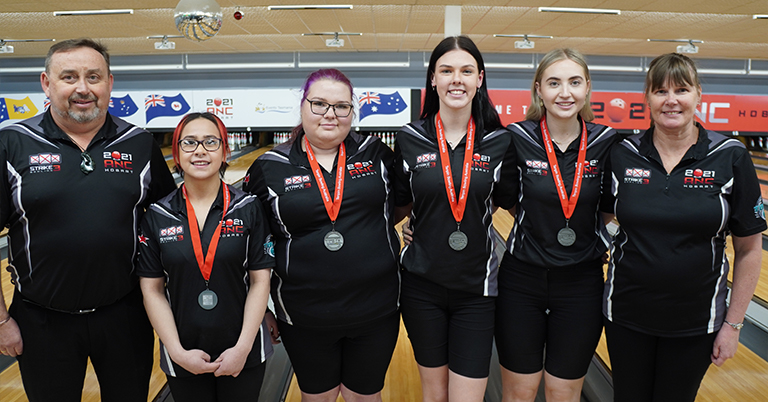 Congratulations to Queensland (Ivy Dickinson & Emily Bottomley) and New Zealand (Ryan Julian and Connor Frith) who claimed the gold medals for the doubles event of the TBA21 Team Challenge this morning.

The TBA21 Team Challenge singles gold medal winners from day one continued to shine when the doubles event got underway on day two with both playing key roles in the doubles victories.

For the girls, the Queensland team of Jess Canfield & Katy Melton led the way early by taking the lead into the sixth and final game. The sixth and last game push from Ivy and Emily saw them post their highest game of the six games (416) and overtake their teammates to claim the gold medal by 35 pins. Queensland would win gold and silver whilst the New Zealanders Paige Knox and Cindy Lister claimed bronze after finishing 30 pins behind the silver team.

The New Zealand boys have had great success with some brilliant bowling in the past week. Ryan Julian continued his incredible form in the boy’s division and partner Connor Frith well and truly kept up with his team member in the doubles event. Frith averaging 240.8, while Ryan Julian finished with an average of 243.3 over the six games. Ryan Julian would go very close to a second 300 game in the third game posting a 299 game. The 10th frame vision of this game can be found below.

The dominating performance would see the team claim gold in front of their New Zealand teammates of Osiris Cave and Ben Pettit by 182 pins. Both Cave and Pettit would perform outstandingly as well averaging 228.8 and 225.5 respectively over the six games. Queensland pair of Kaleb Coyne and TBA21 Master champion Mitchell Williams would claim the bronze medals. 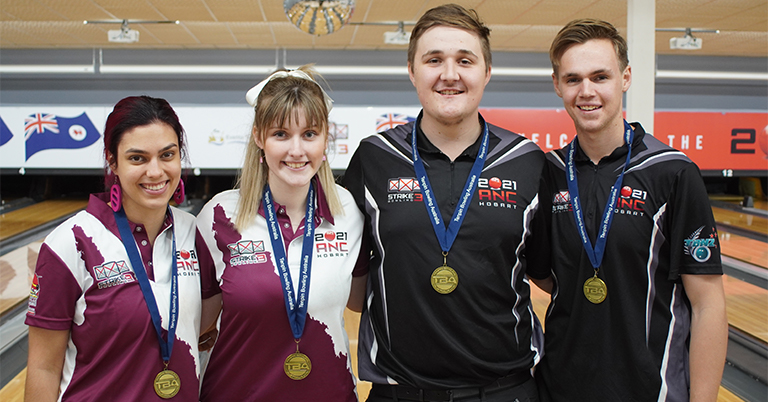 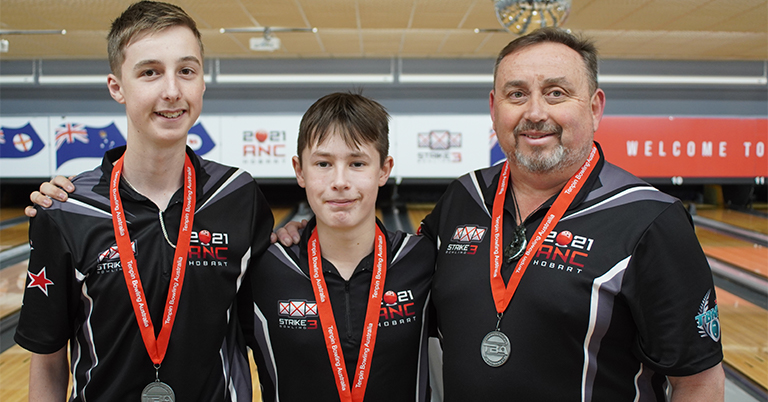 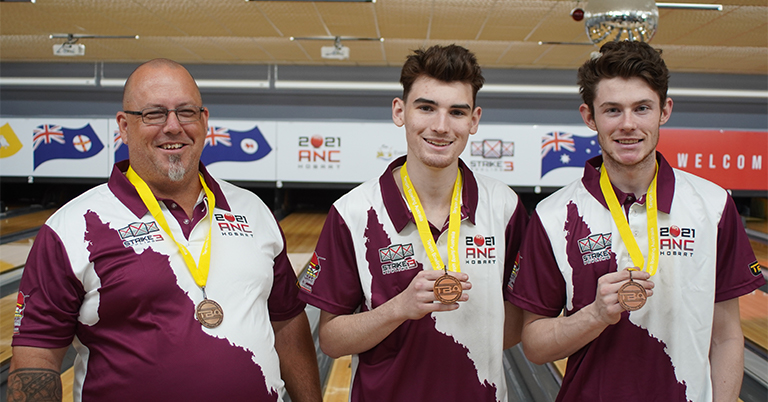 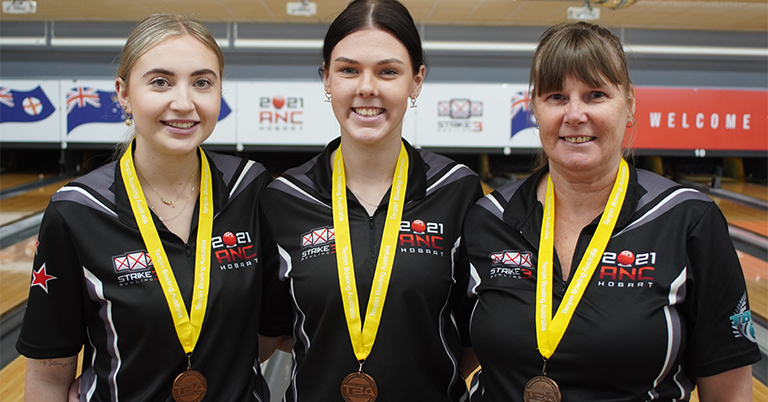 Congratulations to the New Zealand’s boy’s team and Queensland’s girl’s team who won the TBA21 Team Challenge Team event as the second half of the event concluded this afternoon.

In the compressed schedule of this years TBA21 Team Challenge, teams completed the first three games of the team event on day one before finishing the last three games on day two.

Day one would reveal that the New Zealand boys would be a hard team to topple leading the Queenslander boys by 485 pins. The third game of their block saw the team post a score of 1019 between the four bowlers. An achievement that Tenpinresults believes to be a record for this style of event in their system.

The Queenslander boys came out stronger on day two outscoring the New Zealanders in games four and five producing their highest games of the event (897 and 958). It wasn’t enough to stop the New Zealanders claim gold as the Kiwi’s finished with a 5,394 pinfall compared to Queensland’s 5,037.

For the girls, Queensland held a handy lead of 188 pins over NZ at the conclusion of day one. Ivy Dickinson leading the way averaging 203.7. The highest game for the division coming in the second game with the team from QLD posting 802. 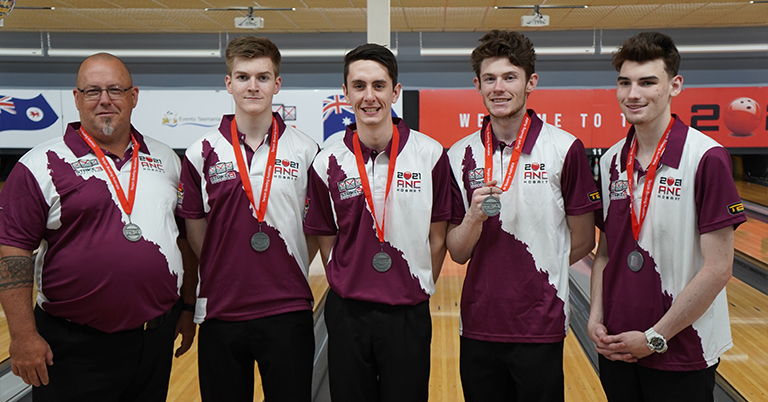 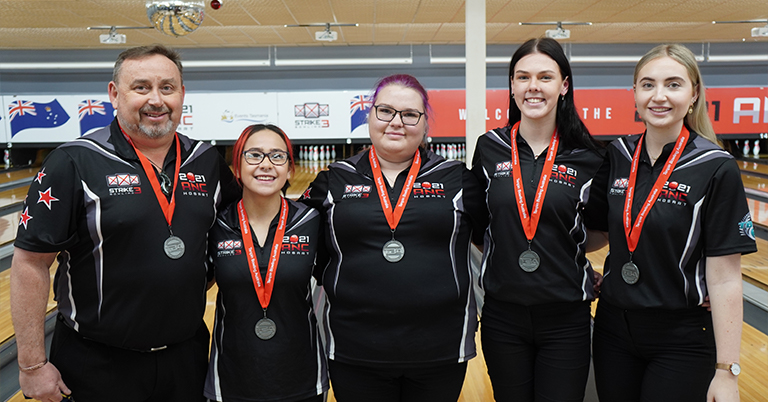 Congratulations to Ivy Dickinson (QLD) and Ryan Julian (NZ) who are the All-Events gold medallists.

If there was an event with a gold medal up for grabs, these two guys swept them up. Both Ivy and Ryan would provide dominating performances throughout the two-day challenge claiming gold medals anytime the opportunity presented.

We congratulate all the placegetters in the All-Events standings for some outstanding bowling over the two days. The top 4 bowlers in the All-Events standings were named All-Stars of the TBA21 Team Challenge.

Queenslander Cameron Stein would join the top three all-events New Zealanders in receiving the recognition for the male division.

New Zealander Melissa Moore would be the 4th placed all-events bowler to receive the award for the female division. The ANC2021 turns its attention to Adults week with practice beginning on Monday the 2nd of August, Squads on Tuesday the 3rd and the first cup event – the Classic Cup scheduled for Thursday the 5th August. The week will also see the Walter Rachuig Trophy Tournament and Australian Masters run. Check back on the schedule link on the ANC homepage for any updated schedules that are released.