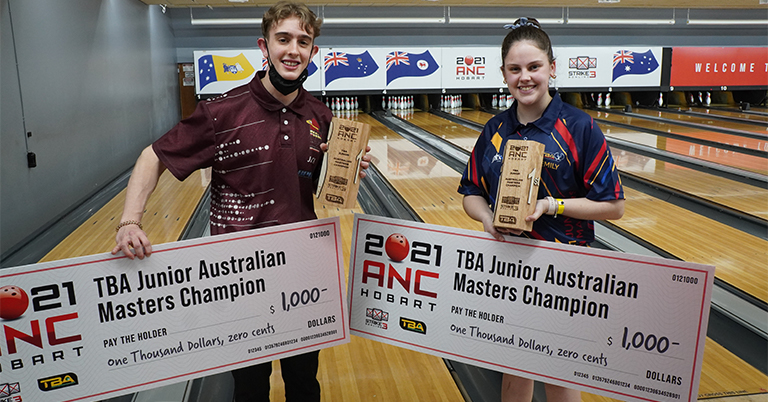 Congratulations to Emily Hart (SA) and Jack Colmer (SQ) who have been crowned the 2021 Australian Junior Master champions at Zone Bowling Moonah this afternoon.

The two winners are both in the Junior National Training Squad and the victories top off quite the week for both.

The first stepladder for the girls would be between South Queensland’s Kayla Piffero and Western Australian NTS member Ashlyn Mohr. Piffero who bowls at Logan City Tenpin would defeat Mohr 223-194 advancing to the title game against Emily Hart.

For the boys, defending Australian Junior Master champion Tarkyn Percy turned it on today. After a gap year due to COVID, the South Australian reminded all he was still keen to make a run for back to back titles.

In match play a last-ditch seventh game score of 236 plus 30 bonus provided Percy with a chance to enter the stepladder final sneaking past Shield All Events gold medal winner Hayden Rowe.

The NTS junior would meet highly fancied New Zealander and newly under 14 Australian Junior Master – Ben Pettit in the first stepladder. Both two-handers battled throughout with Percy claiming victory 213-198.

Percy’s run would end in the title game facing the number one ranked bowler for the event, Jack Colmer. The South Australian would fall short in a high scoring match with Colmer victorious in a 247-221 match.  Colmer’s title victory adds to his impressive medal haul during the President’s Shield. Colmer walked away with silver in the singles, bronze in the doubles, gold in teams, gold in the male division, overall division, bronze in the all-events and now Australian Junior Master champion.

For the first time, both winners would receive the same prizes. Strike 3 Bowling guaranteeing advertised prize money and ensuring both genders get the same prize saw the two winners collecting their $1000 first-place cheques and become the 50th winners of the Australian Junior Masters.

Congratulations to both winners and all bowlers in this year’s event. That concludes junior’s week at ANC2021. Youth week begins tomorrow with qualifying for the TBA21 Masters scheduled for Monday, followed by the TBA21 challenge on Tuesday.