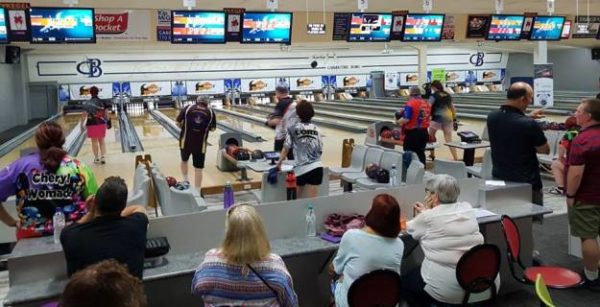 With 112 bowlers in the field for the opening senior’s event on the national circuit for 2019, it was all eyes on Harrison the defending champion after the Queensland bowler came out firing in the first block of qualifying.  She averaged 206.9 after 10 games to sit 42 pins ahead of second placed Cheryl Womack (2027) and Jill Morris (1970) in third with one block to go.

On Sunday, Harrison (continued where she left off only dropping below the card in two of the eight games in block 2.  With an average of 209.9, the Mt Gravatt bowler won her second title in as many years.  Harrison finished 80 pins ahead of second placed Sue Cassell (3699), who returned to the national circuit following a break.  The 2018 National senior rankings winner, Mary Dodds (3617) rounded out the podium in third.

In the senior men’s division, Tony Hamilton battled it out all weekend with former Australian representative, Warren Stewart.  In the opening rounds of qualifying, Hamilton came out firing including a 276 and 258 game to average 242.9 and finish round 1 on 2429 pins and equal with Stewart with only 8 games to go.

On Sunday in round two, Hamilton (and Stewart went toe to toe across the 8 games but with Stewart bowling 184 and 182 in games 3 and 4, Hamilton was in the lead.  However, with Stewart throwing a 258 in game 6, Hamilton had two games in which he needed to hang on.

In the final game, with Hamilton bowling 181 and Stewart 216, Hamilton had enough to take the win by the narrow margin of 13 pins, which also saw Bob Whybrow (3924) finish in third.

In the grand senior’s divisions, it was Whybrow who took the title from Hall of Famer Terry Wenban by 12 pins.   Julie Harrison claimed the double, finishing a huge 220 pins ahead of the nation’s top grand senior bowler, Jeanette Baker (3559) in second.

The tournament also marked the 15th year Hammer have supported the tournament and with its conclusion for 2019, senior bowlers will now head to the Campbelltown Vintage Classic on 23-24th February for the next ranked event for 2019.

For all the results from the weekend’s tournament visit www.tenpinresults.com.au.