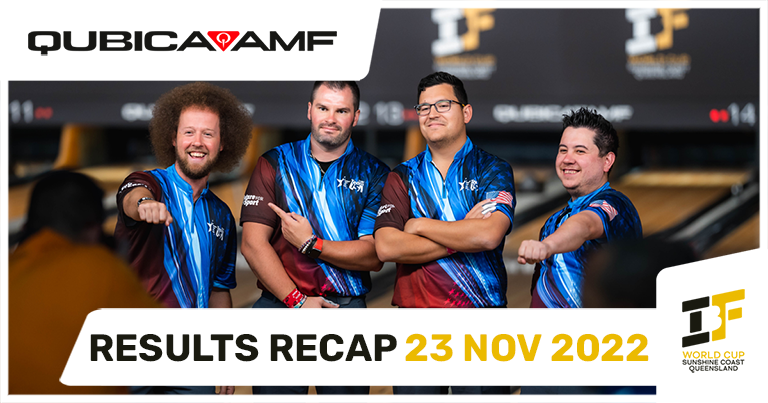 Day 12 of the Tenpin World Cup has come to a close with two nations crowned World Cup Champions at the AGL National High-Performance Centre on the Sunshine Coast, Queensland.

A full wrap of the Para Bowling World Cup is HERE for you to see what has occurred in lead-up to today’s competition and you can access the details from the previous day’s competition HERE.

For all the results – use the link to access the details of each Game visit Tenpin Results – https://ibfworldcup.tenpinresults.com/

As the 12-day 2022 Tenpin World Cup came to a close we finished with the conclusion of the Team event.

Today saw both male and female bowlers competing in the semi-final, bronze medal, and gold medal matches of the event.

The men’s division kicked things off with the Philippines facing Puerto Rico and Australia taking on the mighty United States of America team in the semi-final matchups.

A vocal Australian crowd was in attendance to watch the Aussies take on the might of the United States of America. The team from the USA showed quickly how good they are by defeating Australia in the first two games (279-192, 202-201) before Australia chalked up their first win in game three 224-193. Team USA regained their composure and sent the Australians to the bronze medal match winning 260-228 in game four for a 3-1 final score.

The top four women’s teams took to the lanes next with the USA taking on Germany and Malaysia facing Team Sweden.

The German team has been strong all tournament with Birgit Noreiks claiming the bronze medal in the individual event the previous night. They quickly showcased this easily taking the first two games (223-158 and 201-186) against the number one seed, Team USA. As they are known for, Team USA fought back and took the next two games (211-185 and 221-178) to force a deciding fifth game. With the pressure up, Team Germany came on top to book their gold medal match defeating the Americans 237-207 in game five to win 3 games to two.

The number two and three seed teams faced off for the other spot in the gold medal match – Malaysia and Sweden. The Swedes struck first by winning the first game 237-190 before Team Malaysia leveled things up in game two with a 214-190 win. Sweden would then win the next two games (240-207 and 228-204) to join Germany in the Gold Medal match.

The hometown team Australia was greeted by a loud and excited crowd as they took on the Philippines for the bronze medal in the men’s division. With the crowd on their side for every delivery, the Aussies swept Team Philippines winning three games to zero (198-163, 242-222, 213-159), and claimed the nation’s second medal at the 2022 Tenpin World Cup.

Then it was Sweden to the face Germany in the final match for the entire competition, and Sweden were commanding and took the win in three fast and decisive matches (215-160, 192-162).

The countries took to the podiums for their medal presentations from Tenpin Bowling Australia CEO Rohan O’Neill and Chairperson Jerome Joesph, with QuibcaAMF representative Roger ##, celebrating their crowning championship achievements.

Tenpin Bowling Australia would like to take this opportunity to thank all of the athletes, support staff and supporters from all our competing countries, along with our partners the Sunshine Coast Council (Visit Sunshine Coast), Tourism and Events Queensland, AGL, Sportscover and Soodox.

Tenpin Bowling Australia would also like to thank our event partners QubicaAMF, Tenpin Results and Kegel.