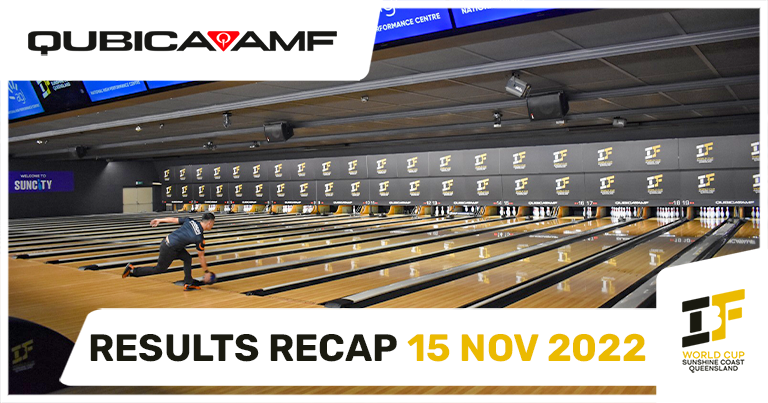 Day Four of Tenpin World Cup competition determined the TOP 32 Men for their next phase of the Championship at the AGL National High-Performance Centre on the Sunshine Coast, Queensland.

A reversal of the format saw the Groups tackle Block 2 today with the Group D and Group C Women and Men cycling through their rounds, and like yesterday there was a tie to decide the very last position for the Top 32 Men.

There is another block for the women, which means these five games, do not require the positional play – Stefanie Johnson from the USA and Janin Ribguth of Germany took out the top positions on their respective ladders.

Both women moved from their second positions on the ladder in Block 1 to take the lead in Block Two, with the Siti of Singapore and Natasha of Maylasia relinquishing their lead and moving into the second positions.

Stefanie Johnson said of her Block “I don’t think that there was much difference in the conditions out there today, it just the way that I played the lanes, it was a little better.”

Given her 5 Win and 0 Losses for this round, the American strategy seems solid, “I am going to start the next round how I ended this round.  I do know that the lanes can play differently, but it is just a matter of really paying attention to what everyone is doing and adjusting my reactions”.

With the Men reaching the end of their Blocks for this phase of the Competition, the last game for each Block sees them enter Positional Play – and for Group D, the standings were not clear under the very end. Losses to some would mean positions in top 8 opening up for others and when it was all done, for Group D – Hupe, Weichert, Dinham, Tsend, Ismail, Andersson, Butturiff and Alsuwaidi are all moving through to the Top 32.

Group C started strongly to conclude the days play and round out the Top 32 and the finished in spectacular style with a four-way tie to determine the last coveted spot.

Lavoie, Syahmi, Drevenstedt and Stretton all tied on 21 points and it was a final roll off that separated them to see Nu’Man Syahmi from Singapore in position 8 and taking the last spot on the roster for the next phase of the competition.

These Men move through to the next Round:

Sunday, 20 November will see the next Singles phase play out across these matches for the Men – to join us and watch the action you can purchase tickets HERE.

Tomorow, on Day 5 of the World Cup – we are an all-female athlete competition day that will determine our Top 16 Women, scheduled to play at 5pm on Sunday, 20 November 2022.