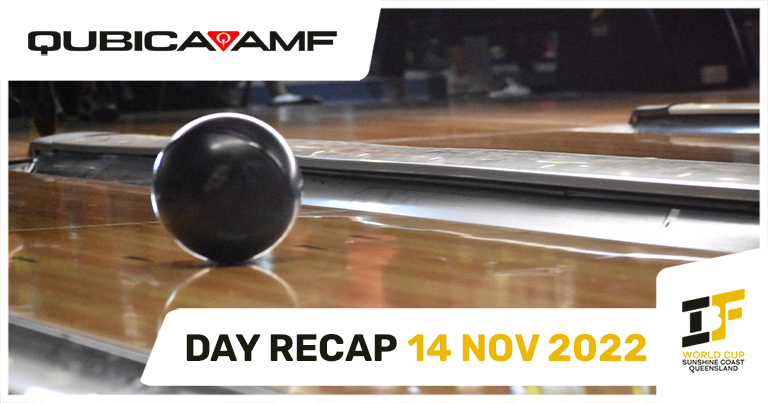 Day Three of Tenpin World Cup competition had a Four Way Tie, the next 300 and determined the first 16 of the Top 32 in other words – Day Three DELIVERED at the AGL National High-Performance Centre on the Sunshine Coast, Queensland.

There was high drama, roll off tension and a slick 300 for Day Three of the Tenpin World Cup 2022.

USA’s Cote held strong to the lead of her Group B in a repeat performance from Block One, while the lead in Group A changed from Laub to Sin.

The chat turned to gear today – with our competitors settled into their choices and nominating their best selections.  Australia’s Bec Whiting said “midrange gear is what is looking the best, start with something strong and fresh and it kind of dies out about game two, so moving on to something with a bit of surface as helped me”.   Cote confirmed her two options “I have used the 900 Global Reality and the 900 Global Reality Check, I start with the reality and move to the Check.”

The Men in Group A and B, completed their Round which triggered a final game determined by Position.

In Group B that resulted in a four-way tie that saw Blomgreen, Alattar, Azcona and Tan Roll Off for Position 8 and the qualifying spot into the next round of singles competition.  It was tense as the foursome battled it out to determine that it would be Timmy Tan that would hold his position and step through to the next phase.

If that was not enough to keep the crowd entertained, we also had Marek Talpa from the Czech Republic deliver our second Perfect Game of the World Cup.

The final Group help off on the dramatic finish, but creating a very orderly order to determine the next eight through to the top 32.