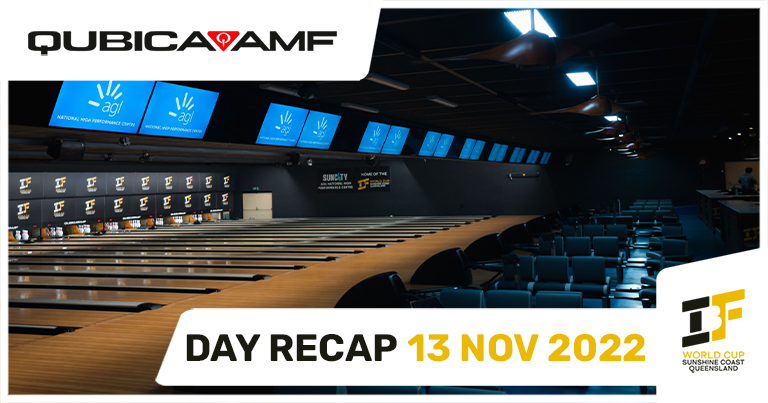 Day Two of Tenpin World Cup competition is completed at the AGL National High-Performance Centre on the Sunshine Coast, Queensland.

Australian reigning PBA champion Jason Belmonte took to the lanes for the first time, and he knows talent when he sees it. “The teams that are here have sent their strongest players, not just at amateur level, but also the professional level, so the field strength is really top notch and in a lot of my matches nothing was easy, no match was over early and that is what you can come to expect at a World Cup”.

It was a sentiment echoed by Kegel’s John Janawicz a 25-year veteran of the sport as a bowler and the man responsible for the lane maintenance with the Kegel Flex machine for the World Cup.

Arriving in Australia to commence work for the Para Bowling World Cup, Janawicz in his role for Kegel Technical Support, has been part of numerous World Cups across the globe.  World Championships John says are “always very prestigious and you get so many of the best players, very good players from around the world, that any of these events are special”.  You can see a full interview with John in our Live Blog.

John noted of the custom pattern “at World Cups you tend to want to see the pattern a little more competitive, the best bowlers like a challenge, you want to make a pattern competitive but not so hard that people don’t know where their balls are going”.

AJ Johnson took up that challenge in the first Group C and he, like many of the other athletes have said this pattern moves “I got to see a couple of the people on our team bowl so I could see how it played from start to finish with reels and stuff, a couple of pairs threw me for a loop and I bowled a 179/180 for two games with of everything is going it is tough to slow down”. But slow it down he did and finished strongly in a group containing bowling superstars like Belmonte and Svenson.

The custom oil pattern for the Australian Tenpin World Cup in 2022 is a “little bit longer” says the man that lays it down before each Block “and was designed for these particular lanes”.  John was confident that the pattern would yield some decent scores.  He was correct with the first 300 perfect game coming early on Day Two.  Malaysia’s Hakim Tun made his mark in the second game to hold third spot in his group.

Sweden’s Pontus Andersson is just pumped to be out of the cold! “It is winter in Sweden” he replied when asked how he is enjoying the Sunshine Coast “I am just happy it is above 10 degrees”. Finishing the top of his pool is bonus in this great weather and Group D concluded the Men’s Block 1.

The evening competition switched to the Women and saw Siti Safiyah from Malaysia move to the top of the Group in the last game. Siti said she found this new format “interesting, it is short and sharp, only 5 games, I feel like I want to bowl more”. Any why wouldn’t you want to ball more with these excellent results:

In the final group of the evening, that seems the cycle of Men’s and Women’s Groups commence again tomorrow, Natasha Roslan joined her countrywoman with an early, commanding takeover of the top of group leaderboard.

You can check out full interviews via the Live Blog from athletes today including AJ Johnson, Andersson and Safiyah as the group pool winners.

We were also joined by some uniquely Australian guests today – with the opportunity to hold a carpet python, a blue tongue lizard, the cutest of baby crocodile or a bird of prey:

Our American friends from Team USA and Kegel have the snakes, but Malaysia has the 300!