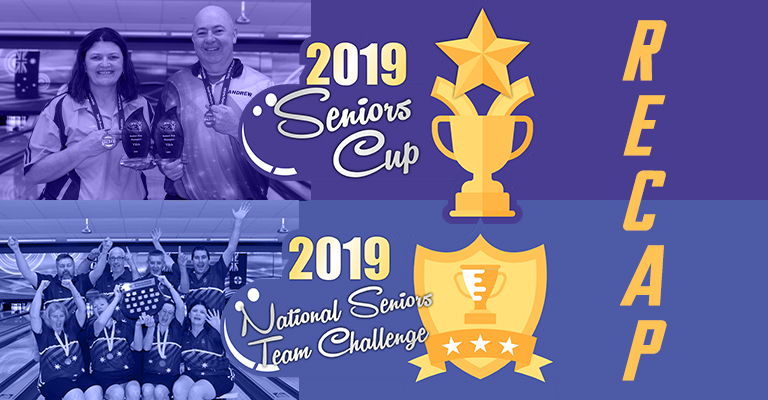 Queensland dominated the headlines in the second week of the 2019 Australian Adult Championship as the Seniors took stage to compete in the Cup and Challenge events at Zone Bowling Rooty Hill, NSW.

In the second cup event for the championship and the final senior ranked event on the calendar, Andrew Lloyd and Cheryl Womack claimed the 2019 Seniors Cup titles. Julie Harrison and Garry Crick would be awarded the Grand Senior champion medals. Established in 1986, the victories for Womack and Lloyd would see the pair become the 34th champions in the the event.

A total of 57 male and 39 female bowlers attempted to qualify for this year’s Seniors Cup finals stage. Participants would use their best three game single or doubles qualifying attempts during the championship to place them in the running to be deemed eligible for stage 2 of the Cup.

The top 24 for each gender would make the second stage with an additional eight games on the agenda.

For the men, Australian representative Shaun Cummings would lead the pack with a 1,701 and average of 212.6 over the eight. For the ladies, Australian World Senior team mate Jeanette Baker would again put her case forward for another Seniors Cup title. Baker who had won the previous two, was competing for her ninth overall Seniors Cup crown.

Ranked fourth after stage two, Andrew Lloyd would win 5 out of his 7 games in the matchplay finals providing a bonus of 100 points that helped steer Lloyd to victory. Tasmanian Garry Crick would come in second after winning 6 of his 7 head to head games and Queensland Brian Roughsedge would claim bronze.

After entering the matchplay in third position and 34 pins behind Baker, Queenslander Cheryl Womack would pick up a bonus of 80 pins on her way to victory. A seventh game win and score of 247 helped overcome a fast finishing Julie Harrison and Jeanette Baker in third place.

The Grand Senior division for bowlers aged 60 and over went to both the silver medallists in Garry Crick and Julie Harrison.

The 13th Seniors Challenge kicked off on Tuesday with Queensland being crowned the overall champions at the conclusion of the three-day event.

Queensland had not won an overall title in the Seniors challenge since the inception of the event in 2007 and 2008. Eleven years later, Queensland would again be etched as champions on the Seniors Challenge shield.

The female division was again won by the ever-dominant Victorian team. A title that the state has held 9 times in the 13-year history of the event. The men’s division would be won by invitational team A.T.B.S.O which would be the organisations first ever division win in the challenge’s history.

The 13th Seniors challenge would see eleven teams battle it out for this year’s title. The challenge would see teams compete for points in singles, doubles, teams and all events. Individuals and teams would contend for medals each day and points that would run over three days to provide Overall, Men and Female champions of the challenge.

The male division saw ATBSO representative Jim Karakostas average 222.3 over six to win gold from David Carmichael and Mike Fergusson. Karakostas would save his best for last with a perfect 300 game on his sixth game to help solidify the gold medal.

The female division saw TBA Hall of Famer Jeanette Baker win another gold medal for her state after averaging 203 over the six. Baker would win by 13 pins over Seniors Cup champion Cheryl Womack who continued her good form. Fellow Queenslander Suz Wenzel would claim the bronze medal.

Queensland would continue their move towards the overall championship with having both their male double pairings finish in the top four. The pairing of David Carmichael and Dale Stewart finished with a 2375 over the six and would win the gold medal. The Queenslanders were followed by Tasmanians Garry Crick and Chris Males in the silver position before ATBSO’s Kevin Webb and Colin Reese rounded out the podium.

The ever-impressive Jeanette Baker would help steer the Victorian females to another gold medal with partner Robyn Flynn. A 306 sixth game for QLD pairing Tracey Crisp and Cheryl Womack helped New Zealand move into position to claim both silver and bronze medals.

Following their doubles success, the New Zealand ladies provided an upset over the highly fancied Victorians to claim gold in the team’s event. The win disrupted a perfect result for the Victorian ladies after they were victorious in both the singles and doubles event. The Queensland ladies would nab third place.

After medalling in both the singles and doubles event, the men from ATBSO would claim gold in the team’s event. Jim Karakostas and Kevin Webb would average 209 and 204 over the six respectively to help ATBSO claim their first men’s division title. Both South Australia and New South Wales would claim their first medals of the challenge with silver and bronze.

Queensland would be crowned overall champions for the 2019 Seniors challenge. A consistent and dominant display from the maroons had both their men and female teams being in the top three of their divisions, ultimately finishing on a combined total point tally of 1151, a 182-point advantage over next best New Zealand and third place ATBSO. This would be Queensland’s third overall title win in the history of the Senior’s Challenge (2007 and a QLD invitational team in 2008).

Victoria claimed back to back titles in the female division with 612 points. 14 pins behind was New Zealand who would be awarded silver and the Queensland ladies in bronze position. This is the 9th female division title for Victoria in the history of the Seniors Challenge.

After a 176-point gold medal performance in the team’s event, ATBSO would claim their first ever division title by being named champions of the men’s division. Queensland would settle for silver with South Australia claiming bronze.

At the end of three days and 18 games, the four best performing bowlers are awarded the title of All Stars of the event based on their All Events Score.