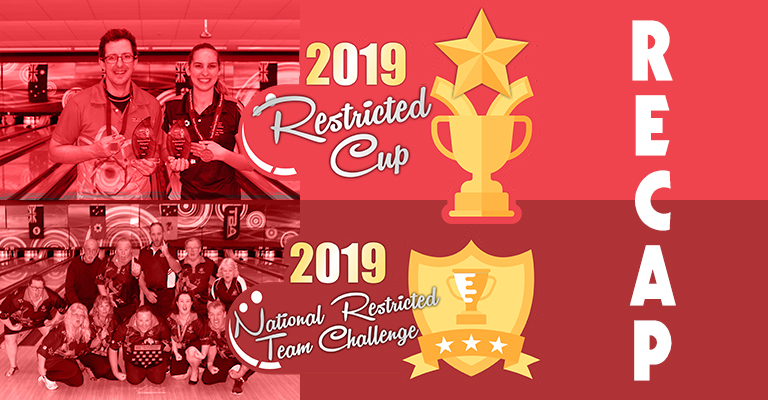 The 2019 Australian Adult Championships kicked off last week with the Restricted Cup and Restricted Team Challenge being the highlights at Zone Bowling Rooty Hill, NSW.

Nathan Penrose and Zoe White were crowned 2019 Restricted Cup champions at the first cup event of the Australian Adult Championship.

A total of 49 male bowlers and 38 female bowlers attempted to qualify for the 2019 TBA Restricted Cup. Bowlers best three game singles or doubles plus handicap qualifying attempts during the championship would be used as the tool to find the finalists.

The stage two final would commence with the top 24 male and females putting their claim forward for this year’s title. The stage would see bowlers bowl six games to find the top six that would compete in the matchplay final. Zoe White from the Northern Territory led qualifying for the ladies with 1,398 while Joshua Bassett led the gents with a score of 1,401.

After her mother Kathryn won the crown in 2017 at Wyncity Bowl & Entertainment in Victoria, Zoe would emulate her mum’s achievement by taking the title by 8 pins over HOLT representative Katrina Potter.

White would win two of the five matches and that was enough with her leading Potter who won three and Tasmanian Jo Bean jumped up to third place after winning all five matches.

The male division saw Australian Defence Force representative Nathan Penrose take the title by 49 pins to South Australian Alan Dale followed by bronze medallist Peter Smith from Queensland. Penrose won 4 of his five matches whilst stage two leader Bassett struggled to get it going only winning one of his final five matches after leading at the completion of stage two.

The first state vs state team challenge kicked off on Tuesday with invitational teams HOLT and the All Abilities team being eventual division winners after the three day National Restricted Challenge.

The 2019 challenge would see eleven teams vying for this year’s title in the FIQ formatted event. The challenge would see teams compete in three disciplines of singles, doubles and teams. Individuals and teams would contend for medals each day and points that would run over three days to provide Overall, Men and Female champions of the challenge.

Bowlers would bowl six games with pinfall plus handicap to determine the winners.

In the male division Steve Gerards from the A.C.T would be victorious over Tasmanian Rick Burdai by 7 pins while Holt bowler Patrick Cripps locked up the bronze medal.

The female division saw Holt bowler Ainslee Lillie win gold over Zoe White from NT and Jo Bean from Tasmania in third place. A highlight in the victory saw Lillie bowl a fourth game of 218 which helped cement the gold medal.

As with all days of the Restricted Challenge, bowlers would get re-averaged at the conclusion of each days play to help even up the competition.

The women would be first off the ranks on day two with Mum and daughter duo of Kathryn and Zoe White claiming gold for Northern Territory. The duo would both bowl scratch games of 192 in the sixth and final game to overtake Holt by 17 pins. Team Holt would continue their strong start with silver from the pairing of Joanne White and Ainslee Lillie whilst the South Australian team of Amber Hutchison and Beth Ewins claimed bronze.

The All Ability pairing of Stephen Gourley and Nathan Curd would win the gold medals in the men’s division. Winning by 20 pins over Australian Defence Force bowlers of Carl Peeters and Nathan Penrose whilst Tasmanian pairing of Johnathon Lockwood and Rick Budai awarded the bronze.

The last day would see all four representatives group up and compete in the team’s event.

For the men, Victoria would take gold which was highlighted by a scratch score of 277 from Dylan Lefevre in the final game. South Australia would claim silver whilst Australian Defence Force would finish with the Bronze.

For the ladies, overall champions for the past two years, New South Wales would be presented gold medals with the Australian Defence Force winning another silver with the All Abilities team the bronze medals.

Team Holt would be crowned overall champions for 2019 with a 10 point advantage over the All Abilities Team and South Australia claiming third place.  This would be team Holt’s first overall championship in the 12 year history of the challenge.

The Holt female team were the catalyst for the overall title by claiming the female division over New South Wales and All Abilities.

At the end of the three days and 18 games, the four best performing bowlers from the three disciplines would be titled All Stars according to their All Events score.

Tomorrow will see the Seniors Challenge commence at Zone Bowling Rooty Hill. Keep up with all the happenings on www.tenpin.org.au and www.tenpinresults.com.au