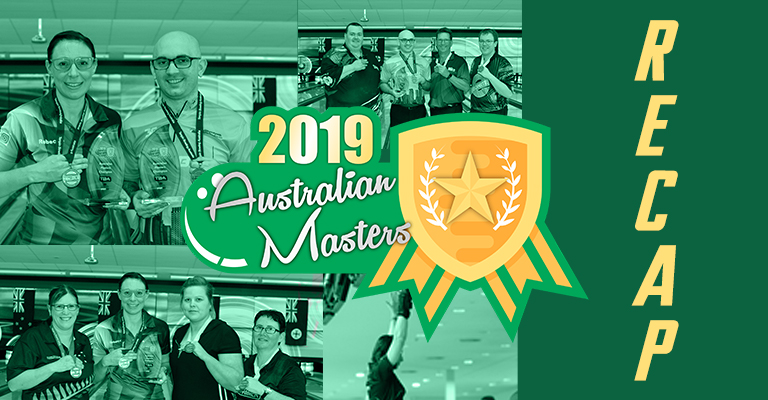 Established in 1963 and sporting a winning list of Australian bowler royalty, the 57th running of the prestigious event would seek to add a 2019 male and female champion to the list.

Unlike the cup events, the Australian masters would require bowlers to lodge at least two qualifying attempts on top of the usual ‘All Events’ entry. A total of 77 males and 47 females would all vie to qualify in the top 40 that would enter the masters for this year’s crown.

For the females, Northern Territory superstar Rebecca Voukolos would enter as the highest qualifier with 1374 in her six game attempt. For the males, NZ bowler Josh Stretton would qualify highest with 1517, largely thanks to a 800 series which included a 300 game on the last day of qualifying attempts.

Play would begin on Friday afternoon where the top 40 for each gender were seeded and in readiness for their quest for masters glory. Six rounds in total were on the agenda. Bowlers seeded from 1-4 would receive a double round bye to Round 3. Bowlers seeded 5-16 would receive a single round bye to Round 2. Finally, bowlers filling positions 17 to 40 would battle it out in round 1 qualifying.

Friday would see rounds 1 and 2 commence with six games of scratch on the agenda. The top 12 on total pinfall would move to round 2 with the bottom 12 bowlers being eliminated.

For the ladies, Samantha Matthews would lead the way averaging 202.3 on a 2,214 pinfall. New Zealander Julieanne Mollett after being seeded 22nd, would make the top 12 cut in 9th position bowling 246 and 215 on her last two games.

For the men, Robert Townsend would lead the group with an average of 211.8 and 1,271 pinfall over the six. West Australian Michael Muir after being seeded 26th, would scrape into the top 12 cut by two pins with a pinfall of 1,158 over the six.

Round two got underway and Samantha Matthews continued her strong push again finishing on top of the round with 1,199 over the six. Julieanne Mollett would again finish 9th with a 1,119 booking her ticket to round 3.

Following his 11th position in round 1, West Australian Chris Watson pushed his case in round 2 bowling a 289 in the first game. Watson finished on top for the men in the round averaging an impressive 224.7.

Round 3 would kick off on the last day of the championships with the remaining 16 hitting the lanes. Rebecca Voukolos would continue her impressive championships form leading the ladies in the six-game round averaging 204.2. Just behind her was Australian World Women representative Bree Macpherson who shot 1,196 and NZ Julieanne Mollet continued her consistent improvement as the rounds went on with a 1,193.

The men would see PBA professional and Australian rep Sam Cooley lead the way with a 1,266 (211 avg) over the six.  New Zealanders Josh Stretton, James Kelly and Sonny Reguerra would fail to continue their championship form and be eliminated from the masters.

With a re oil, the top 8 bowlers from each gender would compete in a single elimination format seeded by their round 3 pinfall. Each match would be the best of 3 games (first to win 2 games). The winning 4 would move onto round 5 and the losing 4 would be eliminated.

Leading female Rebecca Voukolos would be matched up against Janet Hunt in the 1v8 matchup. Hunt would force a third game but Voukolos would prevail with a 264 game to win the match. After winning the Seniors Cup, Queenslander Cheryl Womack would push second seed Bree Macpherson to a third game, but Macpherson would edge out Womack 224-189 in the third. Julieanne Mollett and Alicia Melton would be the other two victors in three game tussles.

Sam Cooley continued to press forward with a straight two game win over Robert Townsend. After being seeded in the number two position from round 3 performances, WA Chris Watson found himself in a dog fight against New South Welshman Stephen Reynolds. The third game would see Reynolds cause the first upset with a 202-199 win. Queenslander Jarrod Langford would overcome Marc Myers and Michael Muir made light work of Brendan meads in a 100 pin two game victory.

Round 5 would see the top 4 competing for a final place. Rebecca Voukolos continued her great form with a straight two game victory over Alicia Melton. Matched up against the ever improving Julieanne Mollett, Bree Macpherson would bow out after only managing to average 154 over a straight two game loss.

Stephen Reynolds continued his perfect timing in the event with a two game victory over Jarrod Langford with games of 236 and 212. Sam Cooley would verse Michael Muir in the other male round 5 matchup. Muir would shock defeating Cooley in the first game in a low score game before Cooley turned it on bowling 245 and 222 to advance to the final.

Rebecca Voukolos verse Julieanne Mollet and Sam Cooley verse Stephen Reynolds were the final four contending for the masters in the round six final. Mollet sent a warning to Voukolos that this wouldn’t be a walk in the park winning the first game 197-185. Voukolos responded with a 223-189 victory in the second. The third and deciding game would see Voukolos reign supreme with a one pin victory 204-203 to be crowned the 2019 female Australian Master.

With the win Cooley became the 7th male bowler to win the Australian Adult Masters twice after winning his inaugural one in 2010.

For all the final standings visit www.tenpinresults.com.au