2018 Australian Masters Goes Down To the Wire 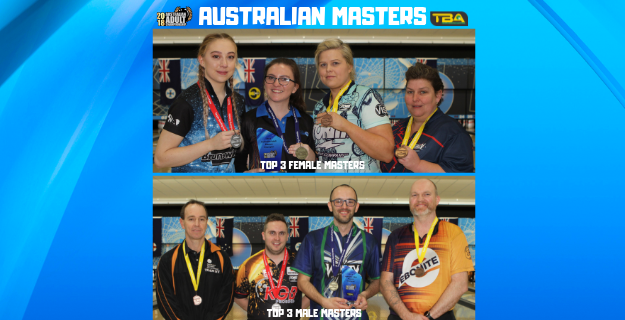 In the final of the tournament, spectators saw both pushed to 3 matches with both Maglieri and Porto winning their respective titles in the final game.

In round 1 of the event, Maglieri shot to the top averaging 208 across the 6 games to lead next best Larissa Furze by 34 pins.

In round 2, the NT bowler dropped back to 5th place overall after averaging 210 across the second block of 6 games to sit 96 pins from leader Bree Macpherson.

In round 3, Maglieri continued to drop down the leader board to finish the round in 8th place overall and scrape into the elimination finals by 2 pins.

In the elimination rounds, Maglieri drew overall leader and fellow NT bowler Rebecca Voukolos. With the pressure on, Maglieri won 226-175 and 233-200 to progress to the next match.

In the men’s division, David Porto climbed his way from 11th position in round 1 to take out the 2018 title.

In round 2, the Wyncity bowler hit back to climb the ladder and move into top spot. Averaging 227.5, including a high game of 290, Porto lead the tournament by 14 pins heading into round 3.

In round 3, Jarrod Langford move passed Porto to take the lead by 68 pins with the elimination rounds set to decide the winner.

In the opening elimination round, Porto drew former Australian representative Brendan Meads. After winning the opening exchange 202-174, Porto lost match two 198-204 to hit back in the final match to defeat Meads and move into the next round.

With Adam Hayes standing in the way of the title, Porto applied the pressure firing 257 to Hayes’ 203 to take match one. With a further game of 209, it was enough to see the Victorian move into the final.

In the final, Porto came up against Chris Castle.  After winning the first match 245 to 200, Castle hit back in the next to win 257-199 and push it to a decider.  With it going down to the wire Porto won the match by the skin of his teeth, 203-202 and be crowned the 2018 Australian Masters champion.